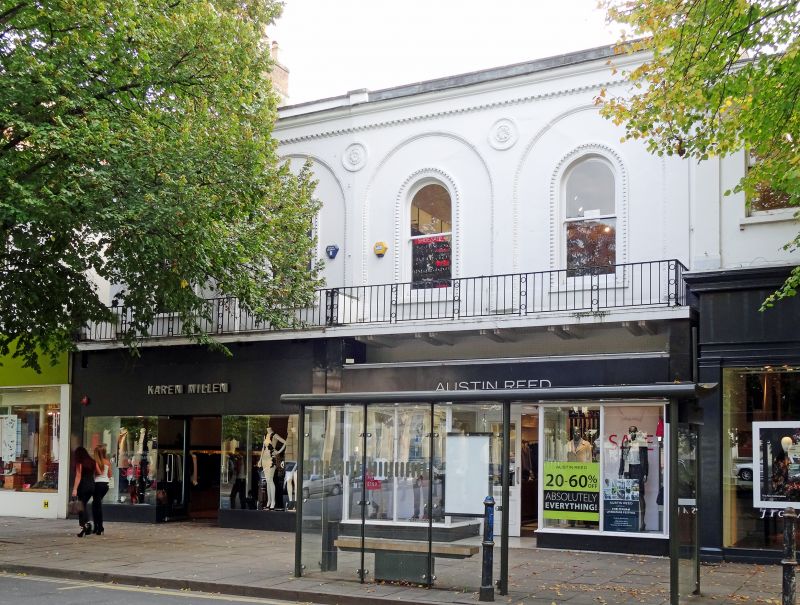 House, now 3 shops. c1820-40 with later additions and
alterations including conversion to shops probably pre-1845;
ground floor shop fronts c1980s. Stucco over brick with hipped
slate roof and renewed tall end stucco stacks.
EXTERIOR: 2 storeys, 4 first-floor windows. Stucco detailing
includes, to first floor: round-arched architraves with
modillion moulding with wider and taller round arches with
egg-and-dart moulding, paterae between; modillion frieze and
cornice. Windows: casements with fanlights to left and 1/1
lugged sashes to right. Ground floor has glazed shop fronts.
Balcony with replacement balustrade.
INTERIOR: not inspected.
HISTORICAL NOTE: The Promenade was laid out in 1818 as a
tree-lined avenue from the Colonnade in the High Street to the
Sherborne Spa (on the site of the Queen's Hotel (qv)), by 1826
it was a carriage drive with a spacious gravelled walk on each
side. Although originally on either side were 'rows of elegant
houses,' by 1845 when Rowe wrote his Cheltenham Guide
(published 1850) he noted that 'nearly the whole of the
left-hand (SE) side .. is devoted to professional or business
establishments'.
An inventive choice of stucco detail, chosen to enrich an
otherwise conventional Neo-Classical design.
(Chatwin A: Cheltenham's Ornamental Ironwork: Cheltenham:
1975-1984: 29; The Buildings of England: Verey D:
Gloucestershire: The Vale and The Forest of Dean: London:
1970-: 146; Rowe G: Illustrated Cheltenham Guide: Cheltenham:
1850-1969: 12).