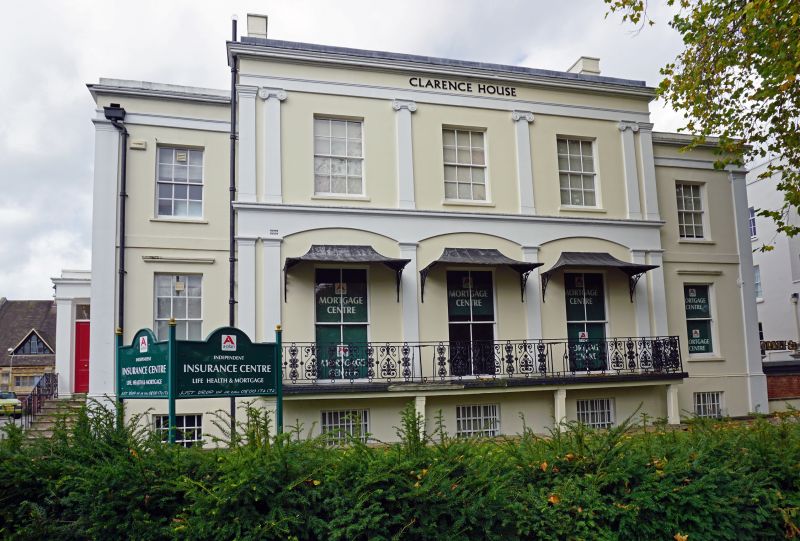 Villa, now offices, and attached railings. c1830-34. This
house is sometimes attributed to JB Papworth, though probably
by John Forbes. Stucco over brick with concealed roof, 4 tall
stucco stacks to ends of main range, and iron balcony railings
probably by Marshalls with a motif derived from LN Cottingham.
PLAN: double-depth with left side hallway.
EXTERIOR: 2 storeys with basement, 3 bays (the end bays are
lower) with first floor windows arranged 1:3:1, and
single-storey entrance bay set back to left. The central
3-window range breaks forwards and is taller. Stucco detailing
includes end Doric pilasters to ground and first floors to
central range; with single pilasters between windows to each
floor to ends, those to ground floor are Doric and surmounted
by shaped frieze forming elliptically-arched arcade over
windows and cornice; those to first floor are Ionic and are
surmounted by entablature. End Doric pilasters to lower ranges
through ground and first floors, with frieze and cornice. 6/6
sashes throughout, those to basement have margin-lights, all
in plain reveals and with sills; outer ground-floor windows
have floating cornices. Entrance to left: flight of 6
roll-edged steps to double 4-panel door with overlight, Doric
pilastered surround and architrave which continues to return.
Rear has first-floor band interrupted by full-height pilaster
strips between windows and to ends with entablature. Left
return has four first-floor windows, the outer windows blind,
otherwise 6/6 sashes.
INTERIOR: open-well staircase has rod and central bobbin
balusters and wreathed handrail; reputed to retain original
plasterwork including guilloche moulded cornice to hall.
Several marble fireplaces. Original joinery remains including
panelled shutters.
SUBSIDIARY FEATURES: continuous balcony to ground floor, main
range has scroll and anthemion motif, tent roofs on brackets
over, to each bay. Railings to sides of steps have heart and
anthemion motif; lyre and heart grille to right return.
Further railings with scroll motif abut front and rear for
short stretches.
HISTORICAL NOTE: The Promenade was laid out in 1818 as a
tree-lined avenue from the Colonnade in the High Street to the