Numbers 125 and 127 and Attached Railings 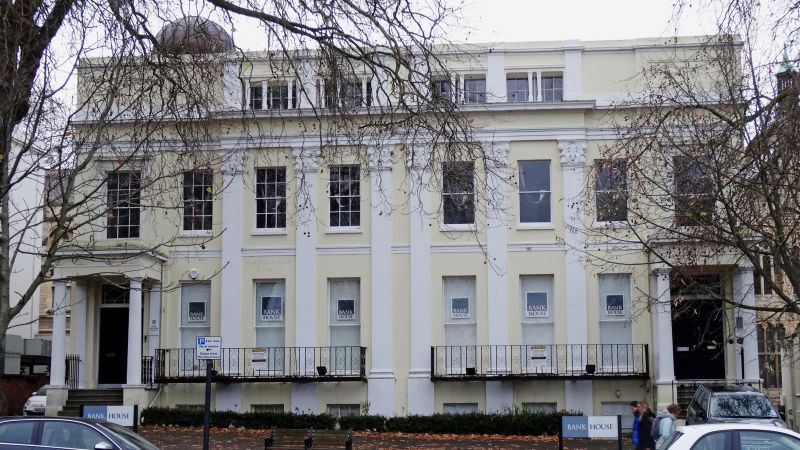 Pair of semi-detached villas, now offices and attached
railings. c1834-40, shown as laid out on Merrett's Map of
1834. Architect probably John Forbes. Stucco over brick with
concealed roof and iron railings.
PLAN: double pile with outer side halls; originally
single-storey (now 2-storey) service wings to rear.
EXTERIOR: 2 storeys with attic on basement, 8 first-floor
windows arranged 1:1:4:1:1. Outer and centre bays break
forwards; central breakforward articulated by 6 pilasters
through ground and first-floor windows with Composite-type
capitals: 2 to centre, between windows and to ends;
entablature. 6/6 sashes where original, those to first floor,
outer bays in tooled architraves with cornices on console
brackets. Basement has blind openings and 6/6 sashes. Attics
have sliding 6-pane sashes; windows set behind screen of
pillars, panels to ends and pilasters to centre, crowning
cornice and blocking course. End entrances: flight of 6 steps
(roll-edged where original) to distyle fluted Doric porches
with wreaths to frieze; double 4-panel doors and overlights
with lozenge glazing bars and margin-lights. Returns have 3
windows: outer blind, central 6/6 sash between paired
pilasters. Rear retains 6/6 and 3/3 sashes.
INTERIOR: retains original plasterwork; acanthus cornice and
ceiling frieze to front room, hall has guilloche motif to
ceiling; dogleg staircase with wreathed handrail and alternate
ornate and stick balusters. Original joinery includes panelled
shutters. Otherwise not inspected.
SUBSIDIARY FEATURE: railings to sides of porches probably by
Marshalls, the motif derived from LN Cottingham and stick
balusters.
HISTORICAL NOTE: Forbes acquired the plot for No.129 Promenade
(qv) in 1833. He became architect and surveyor to the
Pittville Estate in 1835-6. The Promenade was laid out in 1818
as a tree-lined drive to the Sherborne Spa (on the site of the
Queen's Hotel (qv)) from the Colonnade on the High Street, in
1826 it was a carriage drive with spacious gravelled walk on
each side. Buildings on the NW were the first to be developed.
Forms a distinguished group of semi-detached villas with Nos
121 and 123 (qv) and Nos 129 and 131 (qv), which with No.133