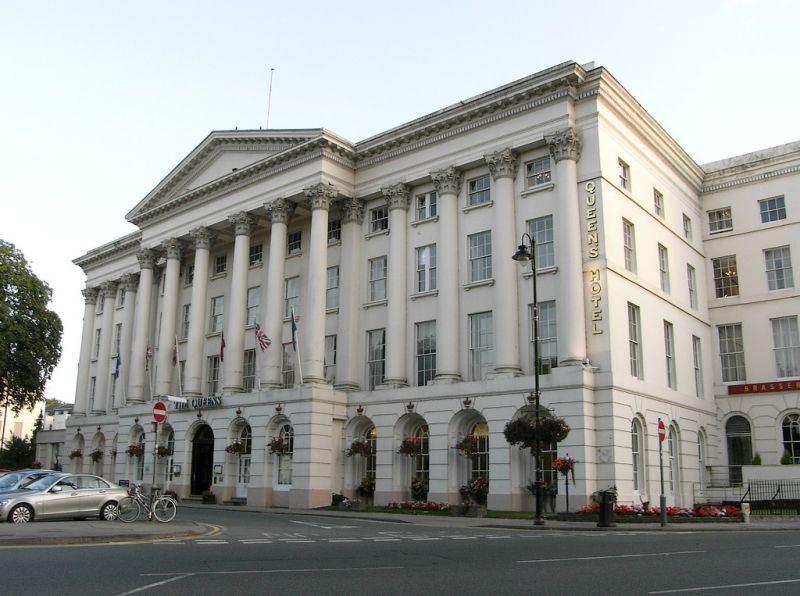 Hotel. 1838. Architects, RW and C Jearrad. Built on the site
of the Sherborne Spa at a cost of »47,000. Stucco over brick
with slate roof.
EXTERIOR: 4 storeys, 13 first-floor windows arranged 4:5:4,
with 4-storey, 3-window range set back to right. Stucco
detailing includes ground-floor horizontal rustication, drawn
into voussoirs over window recesses, with crowns and 'VR' to
keystones; deep round-arched recesses and panelled reveals to
windows and entrance. Ground floor breaks forwards and is
surmounted by 3/4 engaged columns with capitals modelled on
those of the Temple of Jupiter, Rome, breaking forwards again
to centre and with hexastyle pedimented 'portico'. Crowning
dentil entablature with modillion cornice. Ground floor has
mainly 3/6 windows with radial glazing bars to heads. First
and second floors have mainly 6/6 sashes, taller to first
floor. Third floor has 3/3 sashes. Central entrance has
double, glazed doors and fanlight.
INTERIOR: noted as retaining original plasterwork and joinery.
A detailed description of the hotel in 1838, and a summary of
its significance in an international context, can be found in
Pevsner (1976) who described Queen's Hotel and 'one of the
finest early Victorian English Hotels'.
HISTORICAL NOTE: a notable early example of the larger hotels
which were erected in some resorts before the great 'railway
hotels'.
The Promenade was laid out in 1818 as a tree-lined avenue from
the Colonnade in the High Street to the Sherborne Spa (later
named the Imperial Spa), on the site of which the Queen's
Hotel now stands. By 1826 it was a carriage drive with
spacious gravelled walk on either side. Notable guests to the
Hotel include Edward VII (when Prince of Wales), Prince Louis
Jerome Napoleon, the Rajah of Sarawak, Elgar, and Sir Arthur
Conan Doyle.
The hotel opened 21 July 1838, its first lessee was Richard
Liddell. It had over 120 bedrooms, 25 sitting rooms,
apartments for servants, drawing rooms, coffee and billiard
rooms. During the Second World War it was used as an American
Services Club. Verey describes it as, 'a very strong design'.
(The Buildings of England: Verey D: Gloucestershire: The Vale
and The Forest of Dean: London: 1970-: 140,146; Sampson A and