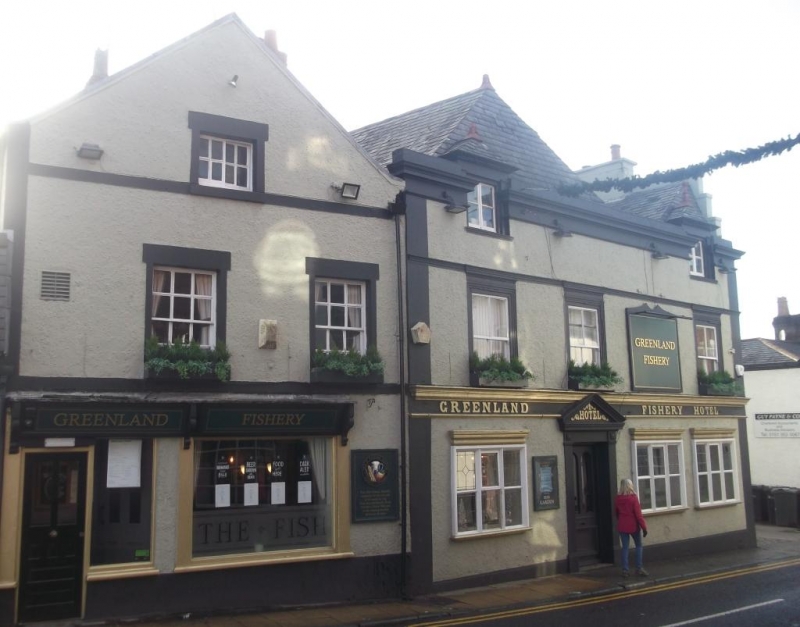 (Formerly Listed as:
PARKGATE ROAD
No.2
The Greenland Fishery Hotel)

Three houses, later house with shop and two inns, now single
hotel. No.1 c1722 with C19 alterations and shop front: No.2
early C18, refronted and remodelled 1892. Buildings combined
to form one hotel in 1990.
MATERIALS: fronts are of whitened roughcast on brick with
painted stone dressings; roofs are Welsh slate. No.2 has roof
in two parallel ranges with hipped gables to street and added
hipped gabled half dormers with terracotta finials: three
stacks to right range.
EXTERIOR: 2 storeys and attics to both buildings; No.1 has
2-window gabled front to street; No.2 a 4-bay front.
No.1 has hotel entrance through small-pane glazed and panelled
door flanked by shop windows framed in plain pilasters beneath
sloped fascia and moulded cornice on consoles. First floor
windows are recessed 6/6 sashes in plain surrounds; to attic,
one 4/4 horizontal sliding sash in similar surround. Windows
on both floors have sillbands.
No.2 has pedimented doorcase to left of centre with glazed and
panelled door, now fixed, and word HOTEL amid scrolls painted
in tympanum. Ground floor windows are slightly projecting
3-light leaded casements with moulded softwood sills and flat
pulvinated heads with crown moulds. On second floor, windows
are three 2/2 sashes with pulvinated lintels: right of centre
bay occupied by painted inn sign with round arched head.
Moulded cornice over ground floor forms first floor sill
string; painted attic band above first floor window heads;
heavy moulded eaves cornice and plain parapet broken by
2-light half dormer attic casements.
INTERIORS: No.1 has firebeam, ceiling beam and exposed ceiling
joists, also timbers in walls, old boarded doors ground floor
and first floor and cottage style winder staircase. Exposed
beams and ceiling joists at first floor level.
No.2 has in the attic there are exposed oak purlins, a good
Queen Anne 6-panel door with semicircular head to top panel
and an early cast-iron grate. There are also beams in the
first floor living quarters and a cottage staircase.
HISTORY: the earlier houses had been converted into two
separate inns,`The Black Bull' and `The Greenland Fishery' by
1822. The two premises were combined under the present name in
1892 at which time the front of the two former inns was
remodelled.
No.1 Parkgate Road was formerly listed separately under
02/08/90.