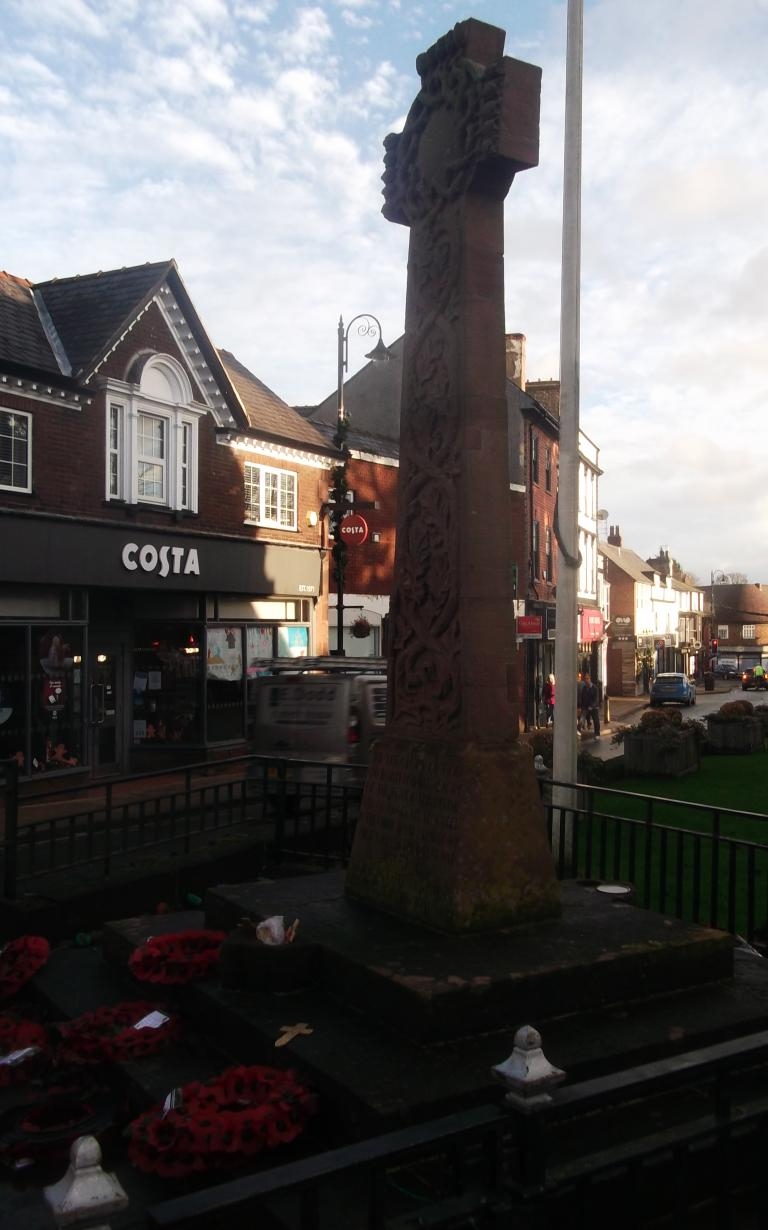 The memorial is located within a gated and railed enclosure in the north-east corner of the churchyard of the Church of St Mary and St Helen (Grade II*). The approximately 5m tall wheel-head cross is carved in sandstone, rising from a tapering plinth that stands on a three-stepped square base. The cross head is ornamented with carved decoration including a crown of thorns around the wheel face and rose buds on the cross arms, whilst the front face of the cross shaft is decorated with intricately carved intertwining foliage patterns including oak leaves.

The principal dedicatory inscription incised into the front face of the plinth reads TO THE GLORY OF GOD/ AND IN IMPERISHABLE MEMORY/ OF THE MEN OF THIS PARISH/ (WHOSE NAMES ARE RECORDED/ IN THE CHURCH) WHO LAID DOWN/ THEIR LIVES IN THE GREAT WAR/ 1914 - 1919/ THEIR BODIES ARE BURIED IN PEACE/ BUT THEIR NAME LIVETH FOR EVERMORE.

The later inscription on the south-eastern face of the plinth reads ALSO/ OF THE MEN OF THIS PARISH/ WHO LAID DOWN THEIR LIVES/ IN THE GREAT WAR/ 1939 – 1945.

A plaque behind the south-eastern side of the memorial enclosure records the death of a serviceman who lost his life during the Falklands conflict (1982), on the ship HMS Coventry.

This List entry has been amended to add the source for War Memorials Online. This source was not used in the compilation of this List entry but is added here as a guide for further reading, 15 January 2018.

The aftermath of the First World War saw the biggest single wave of public commemoration ever with tens of thousands of memorials erected across England. This was the result of both the huge impact on communities of the loss of three quarters of a million British lives, and also the official policy of not repatriating the dead which meant that the memorials provided the main focus of the grief felt at this great loss. One such memorial was raised at Neston as a permanent testament to the sacrifice made by the members of the local community who lost their lives in the First World War.

The memorial was unveiled on 29 August 1920. The ceremony was attended by the Dean of Chester and conducted by the Vicar, Reverend LW Throughton. The memorial was erected by EO Griffiths of Liveprool, who also built the statue of Llywelyn ap Iorwerth, Lancaster Square, Conwy (Grade II). The memorial was designed by the architects Willink and Thicknesse and cost £175. Railings enclosing the memorial were produced by Peaks Ltd at a cost of £48. Other memorials in the church were unveiled on the same day.

Following the Second World War a dedication to mark those who died in that conflict was added to the memorial.

Neston War Memorial, which stands in the churchyard of the Church of St Mary and St Helen, is listed at Grade II for the following principal reasons:

* a richly ornamented wheel-head cross, in the Celtic style.