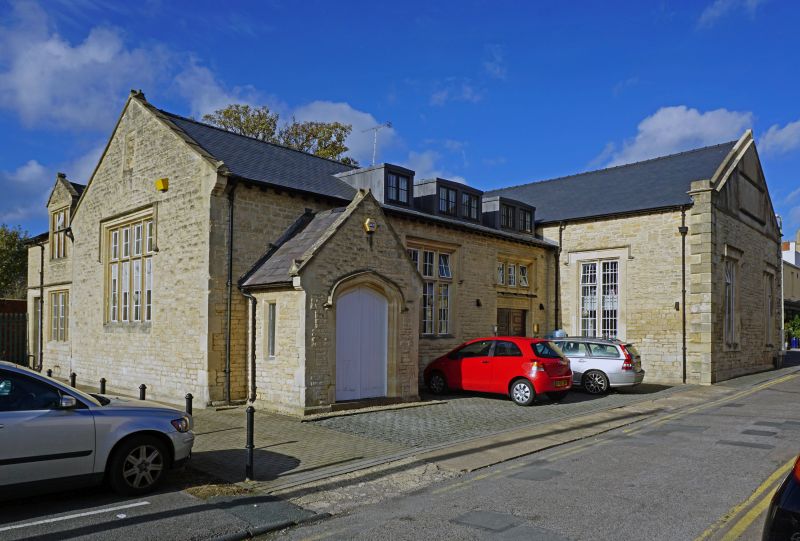 Infant school, now printing works. 1830, extended mid-late C19
and with restorations and alterations in 1990 (date above
entrance). Built for the Revd Francis Close according to the
design precepts of the educationalist Samuel Wilderspin.
Cotswold stone coursed squared rubble with ashlar quoins,
pinkish-brown brick to part of rear extension, and Welsh slate
roofs. Rectangular single-cell block with later wing added to
the south side forming T-plan, then infilled to one side.
EXTERIOR: north facade (to street) has quoins and central
truncated stack; reputed to have been originally blank, with
entrance to left with Gibbs surround (now blocked) and further
C20 entrance to right with plank door. Crowning cornice and
renewed parapet. East gable has 2 tall 2-light stone mullioned
windows with multi-paned casements and hollow-chamfered
dripmoulds over. The inscription board (now blank) survives in
the gable. West gable has tall 3-light mullion window with
similar casements and under hollow-chamfered hoodmould. Coped
gables with string. South front has tall 2-light mullion
window. Centre projects with 2-light mullion-and-transom
window between entrance at left with C20 double doors and
remains of similar window, now overlight and with hoodmoulds,
and at left a gabled porch with 4-centre-headed double plank
doors in tooled and chamfered surround with hollow-chamfered
hoodmould. 3 c1990 attic dormers. 4-light window in gable end.
INTERIOR: originally a single schoolroom measuring 60 x 30
feet to accommodate 250 children aged 2 to 7; a gallery has
been inserted to create office space.
HISTORICAL NOTE: the oldest surviving specially designed
Infant School built according to the most up-to-date ideas of
the time. It was opened on 20 July 1830. It is reputed that
the south facade had originally 4 tall windows, that the
parapet was castellated throughout and that there was a small
gallery to the west end.
(McCann P and Young FA: Samuel Wilderspin and the Infant
School Movement: 1982-: 95-100).