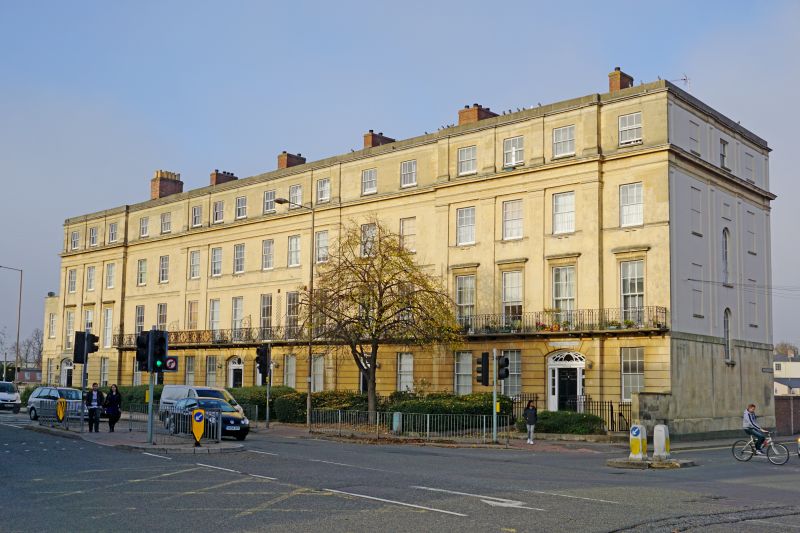 Terrace of 6 houses, now offices (to left) and flats and
attached area railings. 1820-25. For the Hon Katherine Monson,
who supervised the building. Ashlar over brick with concealed,
double-pitch roof and brick party-wall stacks; cast- and
wrought-iron balconies and railings.
EXTERIOR: 4 storeys, 17 first-floor windows arranged
1:3:2:6:2:3:1, with 2-storey, single bay to left. The
composition would be symmetrical if the left bay was to full
height. 3-window ranges break forwards with central 6-window
breakforward. Detailing: continuous horizontal rustication to
ground floor with first-floor band surmounted by Doric
pilasters through first and second floors to end
breakforwards, pilasters at ends and between windows, and to
centre breakforward to either side of outer windows,
interrupted by second floor band except to end breakforwards,
and with continuous entablature; above these are pilasters the
entablature of which is incorporated into continuous crowning
frieze and cornice; blocking course. Tooled architraves and
cornices to first-floor windows to end breakforwards and to
window to far right. 6/6 sashes throughout, full-height to
first floor. Symmetrically-placed entrances to left, right,
right, left, left and right: 3- and 6-fielded-panel doors
(upper panels raised and fielded, lower flush panels have
reeded surrounds of circular) with sidelights, in moulded
pilastered surrounds and with egg-and-dart and acanthus
friezes and overlights, 4 of which are with cambered heads,
and mainly with batwing and circle type glazing bars. The rear
elevations are well treated, the end buildings are ashlar (now
stuccoed) at rear and have full-height, 3-window bows. To
centre are 3 full-height pilaster strips forming sides of
elliptically-arched recesses to 2 central windows. Further
pilaster strip articulates party-wall divide between next two
houses and ends. Originally 6, now 2 tripartite 6/6 between
2/2 sashes with flat arches of gauged brick, otherwise 6/6
sashes throughout. Central portico has 1 Doric column,
otherwise pilasters, dentil frieze and cornice; two 3/6 sashes
with Gothic glazing bars to round-arched heads and door with
similar glazing, to porch right return a rose window and

entrance: 4-panel part-glazed door with circular glazed panel.
Entrance to No.6 a recessed 6-panel door with overlight in
round-arched pilastered surround with frieze and blind
elliptical overlight. Right return has 3 first-floor windows,
mainly blind; two 6/6 sashes with radial glazing bars to
heads.
INTERIOR: many original features: original joinery includes
panelled shutters to some windows; No.1 has plasterwork with
acanthus cornices and scrolled ceiling friezes, windows have
tooled architraces with fleurons and honeysuckle, narrow
open-well staircase to full height with carved tread ends and
stick balusters interspersed with ornate iron balusters and
panels of ornament and with wreathed handrail; 6-panel doors,
that to landing with tooled architrave between round-arched
niches; some architraves with flowers to corners; marble
fireplaces; otherwise not inspected. No.2 retains similar
staircase with stick balusters and run-out handrail, similar
joinery; otherwise not inspected.
SUBSIDIARY FEATURES: continuous wrought-iron verandah (missing
to left) has panels with central circle motif and, at right,
embellished rods with lattice frieze; balcony dividers have
scrolled circle motif. Bootscrapers to Nos 1, 2 and 4.
Spearhead area railings with urn finials. Rear has several
individual balconies with lattice and scrolled lozenge motif,
and embellished rods and X-motif.
HISTORICAL NOTE: The terrace does not appear on the Post
Office Map of 1820, but is shown on Griffith's Map of 1826. In
1834 Henry Davies noted that in these 'fashionable
dwellinghouses several of the leading families of Cheltenham
reside'.
Radford notes, 'The rear is unique in Cheltenham in that it
has a formal symmetry'; Verey regards the balconies as
'magnificent'.
(Sampson A and Blake S: A Cheltenham Companion: Cheltenham:
1993-: 116; Chatwin A: Cheltenham's Ornamental Ironwork:
Cheltenham: 1975-1984: 28; The Buildings of England: Verey D:
Gloucestershire: The Vale and The Forest of Dean: London:
1970-: 149-50; Radford S: The Terraced Houses of Cheltenham
1800-1850: 1992-: 55-63).