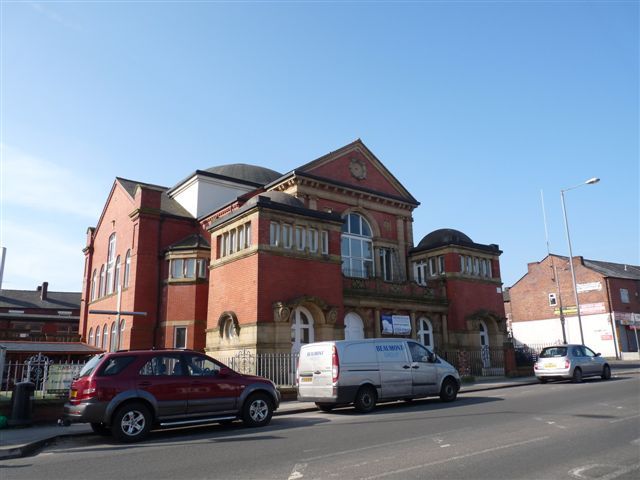 Methodist church and Sunday school. Sunday School (now a
general purpose hall) dated 1892; the church, 1902. JC
Topping, architect of church. Brick with stone dressings and
slate roof. Both are designed in a free classical style, the
church adopting a basilica plan with central domed hall with 4
axial wings.
EXTERIOR: pedimented front range with single storey porch
between 2 projecting pavilions. Coupled Tuscan pilasters each
side of pediment, with wide Palladian window. Porch has outer
entrances with paired panelled doors and central lunette
window, all segmentally arched with splayed stone voussoirs.
Pavilion blocks to either side also have paired panelled doors
beneath segmentally arched canopies carried on angel corbels.
Similar canopies over lunette windows in return elevations of
pavilions. Arcaded windows below parapet, and small domed roof
over each pavilion.
Pedimented range is linked to gabled wings to either side of
central domed hall by 2 storey canted angles with arcaded
windows below the eaves. These side gables each have stepped
segmentally arched windows at upper level, and 5 window arcade
below. Central dome formerly surmounted by lantern.
Rear gable is blind, with canted apsidal end. Single storey
corridor and subsidiary hall range added in 1928 links church
with main hall. Stepped front with 2 bay centre block flanked
by single bays of less height to each side. Paired round
arched windows on each floor to central block, which has stone
cornice and volutes linking to cornice of flanking bays, and
segmentally arched doors in outer bays. Further flanking
single storey pavilions with stone architraves to window and
door which has scrolled pedimented head, on each side. Main
hall beyond of 5 bays with wide segmentally arched windows at
upper level, and corridor ranges at each side.
INTERIOR: basilica plan to church with central dome with
plasterwork ribs, and composite pilasters at angles of central
space; Choir stalls flank the pulpit, all carved in
renaissance style, and dated 1903. Organ to rear of choir
stalls, added 1935. Some stained glass, including a series
illustrating the beatitudes (possibly removed from elsewhere)
and a window signed Barrowclough & Saunders of Lancaster 1906.