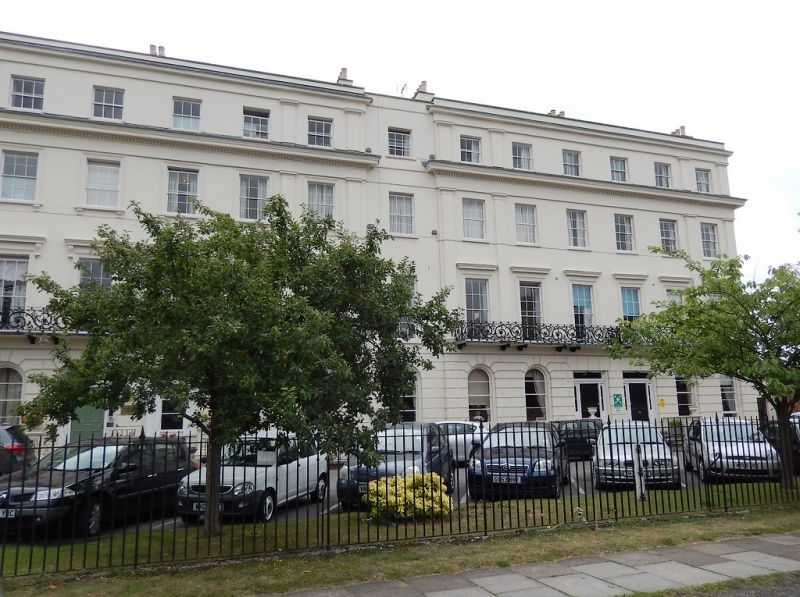 Terrace of 4 houses, now residential home, and attached
railings. c1840s. Probably by Edward Jenkins for developer
James Fisher. Stucco over brick with slate roof, end and ridge
stacks; iron area railings and balcony.
EXTERIOR: 3 storeys on basement, 14 first-floor windows
(arranged 1:6:1:6). The 6-window ranges break forwards and are
articulated to either side of end windows by Doric pilasters
through first and second floors surmounted by dentil
entablature to each breakforward; third floor has Doric
pilasters above main pilasters and entablature; continuous
crowning blocking course and copings. Ground floor has
rustication, drawn into voussoirs over openings. Ground floor
has round-arched 2/2 sashes with roll-moulded surrounds and
chamfered sills. Otherwise 2/2 horizontal-pane sashes, those
to first and second floors of breakforwards have tooled
architraves, those to ground floor with cornice, those to left
part on consoles, otherwise floating. Basements have 6/6
sashes. Paired entrances: some now blocked and with sashes. To
left: flight of 4 steps to 4-panel door with margin-lights and
segmental-arched overlight (and to blocked entrance);
entrances to right now under C20 porch, flight of roll-edged
steps to 4-panel part-glazed door, 2 overlights.
INTERIOR: some modification to interior but retaining many
original features including plasterwork with egg-and-dart
cornices, and modillion cornices, grape ceiling friezes; some
fireplaces; original joinery includes 3 remaining
narrow-open-well staircases with embellished rods and lion's
paw newels. Otherwise not inspected.
SUBSIDIARY FEATURES: breakforwards each have balconies with
embellished Vitruvian scroll motif after LN Cottingham,

similar to those on Royal Parade, Bayshill Road (qv). Area
railings have scrolled lozenge and stick motifs, some reset.
HISTORICAL NOTE: Suffolk Square occupies land bought by the
Earl of Suffolk from the de la Bere's, on which he built
Suffolk House for his own residence; his daughter later sold
much of the land, on which Suffolk Square now stands. The
Square is shown as planned but not complete on the Post Office
Map of 1820.
Part of a distinguished group of buildings in Suffolk Square.
Residential home includes Faithfull House (northern part)
(qv).
(Chatwin A: Cheltenham's Ornamental Ironwork: Cheltenham:
1975-1984: 46; Merrett HS: Plan of the Town of Cheltenham:
1834-; Blake S: Notes).