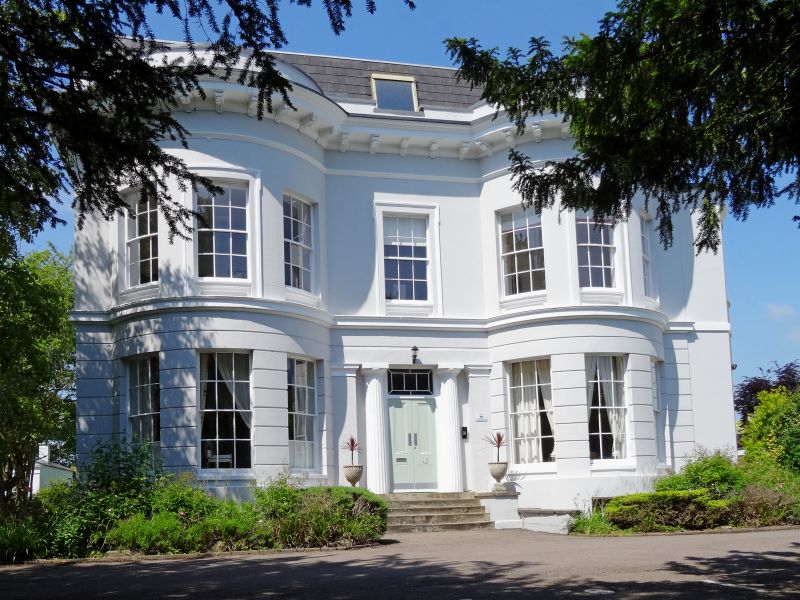 Villa, now flats. c1833-50 with later additions and
alterations including c1980 raising of roof, and with
extensions to right and at rear. Stucco over brick with
renewed mock slate roof.
EXTERIOR: 2 storeys on basement and with attics, 5 first-floor
windows arranged 3:1:3 with 2 outer full-height bows. Stucco
detailing includes horizontal rustication to ground floor,
moulded first-floor sill band, tooled and eared architraves to
central window and those to centre of bows to first floor, all
first-floor windows with aprons. 6/6 sashes throughout, those
to bows curved on section. Flight of steps to central
entrance, double 2-fielded-panel doors with overlight with
decorative glazing bars between 3/4 engaged fluted Doric
columns in antis. Basement has 8/8 sashes. Crowning cornice on
acanthus brackets, low parapet. Right return has 3 full-height
bows. Rear has 2-storey bow to centre with Doric pilasters
forming 'colonnade', 2 outer rectangular bays; some bows
retain 6/6 sashes, curved on section.
INTERIOR: not inspected.
HISTORICAL NOTE: The Park had been laid out by 1833 by its
owner Thomas Billings as an oval tree-lined drive with a
central park which for a short period in the mid C19 became a
zoological garden. In 1839 the development was bought by
Samuel Daukes who continued the building. One of the principal
developments influenced by White's and Nash's schemes for
Regent's Park, (1809-11) London. An interesting villa design,
distinguished by its repetitive rhythm of bowed bays.
(Sampson A and Blake S: A Cheltenham Companion: Cheltenham:
1993-: 36,92).