Entrance to Fullwood (Cheltenham and Gloucester College of Higher Education) 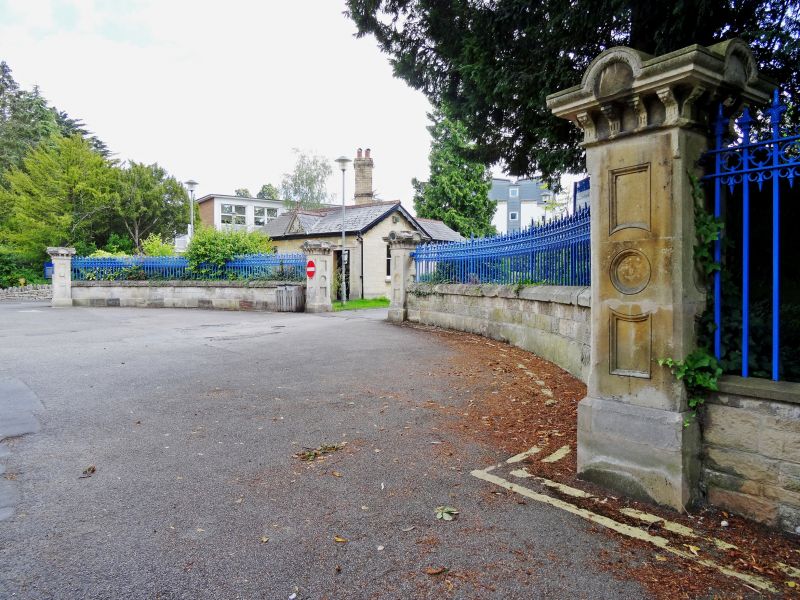 SO9321SE THE PARK
630-1/21/929 (South side)
14/12/83 Entrance to Fullwood (Cheltenham and
Gloucester College of Higher
Education)
(Formerly Listed as:
THE PARK
Quadrant walls, railings, gatepiers
to Fullwood entrance of the College
etc)

Quadrant walls, railings, gates and gate piers. c1890-1900,
with later additions and alterations. Probably for Mrs
Macknight Crawford of Lauriston Castle. Dwarf walls with heavy
iron railings. Central gatepiers joined by C20 gates (not
included) quadrant walls surmounted by railings to outer
piers, then further stretch of wall for approx 5m with
railings to right return and end right pier. Panelled ashlar
gate piers with modillion capping; cappings contain copper
monograms. Low walls have chamfered copings; railings have
heavy spearhead caps and frieze with circle motif, bars in 2
heights.
HISTORICAL NOTE: this marks the site of the entrance to the
'Gloucestershire Zoological, Botanical and Horticultural
Gardens' which originally occupied the centre of The Park. The
Park was laid out by 1833 by its owner, Thomas Billings, as an
oval tree-lined drive with a central park which, for a short
period in the mid-C19 became a zoological garden. In 1839 the
development was bought by Samuel Daukes who continued the
building. The Park is one of the developments influenced by
White's and Nash's scheme for Regent's Park (1809-11), London.
The monograms on the gatepiers probably relate to the
occupation of the adjacent house (Fullwood qv) by a Carmelite
order of nuns c1920. The Estate passed to St Mary's Training
College in 1931 and is now part of Cheltenham and Gloucester
College of Higher Education.
Forms an integral part of a significant streetscape group of
piers in The Park.
(Sampson A and Blake S: A Cheltenham Companion: Cheltenham:
1993-: 36,92; Girouard M: The English Town: 1990-: 270-271;
Sampson A: Historic Buildings of Cheltenham and Gloucester
College of HE).