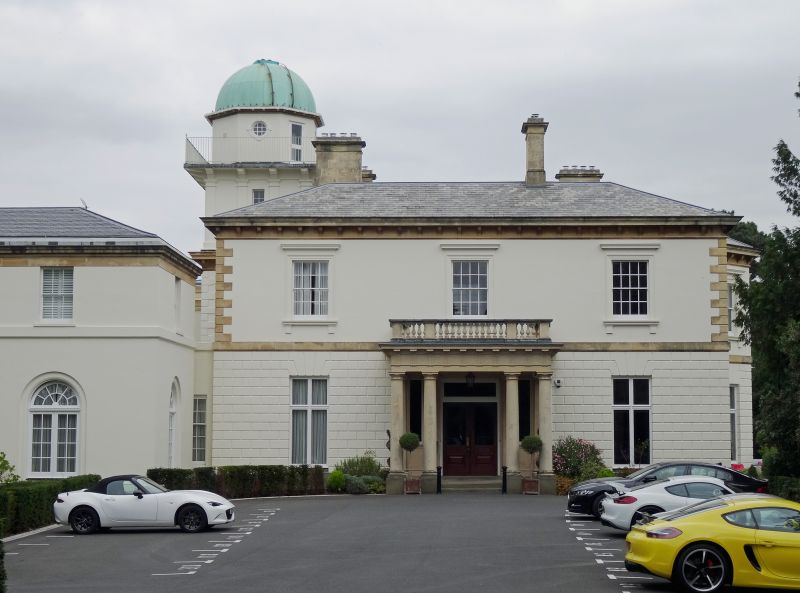 Large house, now offices. 1855-7 for Johan Andreas Frerichs,
architect: Daniel Humphris; with observatory c1909 for John
Player and later conversion by GH Ryland. Stucco over brick
with ashlar dressings and hipped slate roofs. Italianate
style.
PLAN: double-depth plan with central hallway & range to rear.
EXTERIOR: 2 storeys, 3 first-floor windows with 2-storey,
3-window orangery to left. Main range: ashlar detailing
includes, to main range, rustication to ground floor
surmounted by first-floor band and quoins above; frieze and
wide eaves on brackets. Ground floor has French windows with
margin lights; first floor has 8/8 sashes in plain reveals and
with sills on feet, tooled architraves with cornices. Central
entrance, Roman Doric porch with paired columns, entablature
with triglyphs and metopes and balustrade above. To rear, on
the roof, is an observatory with a copper dome. Rear has
canted central bay. Similar detailing as front facade.
Orangery, to left. 2 storeys, 3 first-floor windows.
First-floor band, crowning entablature. Ground floor windows
are round-headed, with multi-pane casements; 6/6 and central
6/6 between 2/2 sashes above.
INTERIOR: hall has 2 columnar Corinthian screen; double
drawing room to right has marble fireplaces and heavy
plasterwork with deep acanthus friezes (similar to those in
No.83 Pittville Lawn (qv)); doorcases have architraves with
Neo-Classical type friezes and cornices. Many rooms reputed to
retain plasterwork and fireplaces.
HISTORICAL NOTE: the house was occupied by the American
Services of Supply during the Second World War (1942-5).
Large 1940s wing to north east added when the house became an
hotel is not included.
(Sampson A and Blake S: A Cheltenham Companion: Cheltenham:
1993-: 131; Cheltenham Local History Society Journal: Blake S:
A short history of Thirlestaine Hall: 1986-: 52-56).