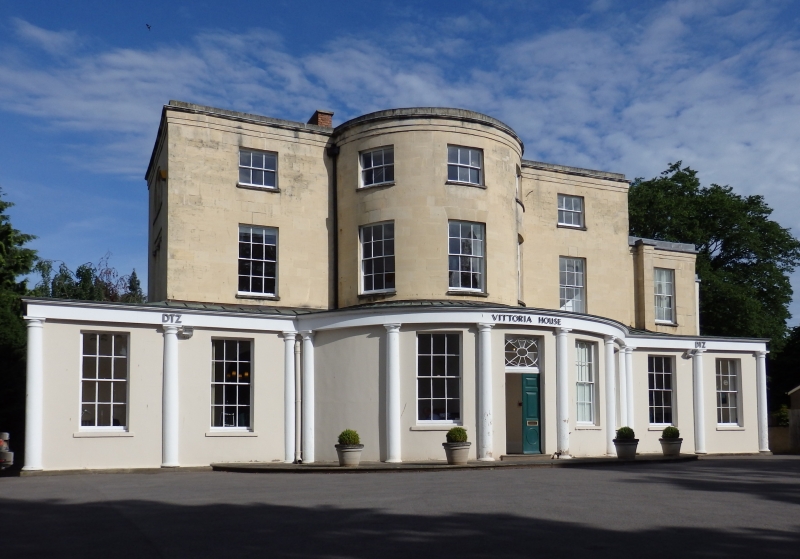 Formerly known as: Hygeia House VITTORIA WALK.
House, spa and assembly rooms, now offices. c1801-4 for Henry
Thompson (as his own dwelling) and originally known as Hygeia
House, and with later additions and alterations including
later C19 range at right. Ashlar over brick with concealed
roof, brick ridge stack and wrought-iron balustrade to rear.
PLAN: originally single depth with central full-height bows to
front and rear, with surrounding colonnaded loggia on ground
floor; interior has stairhall to front and main L-shaped room
at rear and left.
EXTERIOR: 2 storeys, 3 bays, with windows arranged 1:3:1, and
2-storey single bay set back to right, with further
2-lower-storey bay set back again. 6/6 sashes throughout all
in plain reveals and with sills. Loggia has Doric columns, now
infilled to front and with central entrance, double 6-panel
doors (the upper panels fielded, the lower panels with circle)
with overlight with decorative glazing bars (in oval motif).
Left return has tripartite windows to ground and first floors,
6/6 between 2/2 sashes, those to first floor with Doric
columns between; Diocletian window to second floor with
sashes, all in round-arched recess to full height. Rear: Doric
loggia continues to main part.
INTERIOR: retains many original features including joinery and
plasterwork; inner door has similar overlight with decorative
oval glazing; doors, reveals and shutters have lozenge panels,
fluted architraves with fleurons and lion masks to corners to
windows and doors. Embellished cornices, simpler to first
floor. Open-well staircase probably altered mid-C19 but
retaining alternate stick and ornate iron balusters, handrail
has newel posts and lion-paw foot.
SUBSIDIARY FEATURES: boot scraper to front step. To rear,
between columns a balustrade with embellished rods and circle
motif, the enriched lead castings are in C18 style, a simpler
version of a balcony that appears in 'Original Designs in
Architecture' by William Thomas, 1783.
HISTORICAL NOTE: Thompson had in 1801 bought land to the south
and east of the Old Well from the de la Beres on which he
built Hygeia House for his own occupation. He first dispensed
Mineral Waters here in 1804 and the original Montpellier Spa
started in this house. The spa and assembly rooms were moved

in 1809 to the site of the present Montpellier Rotunda in
Montpellier Walk (qv), moving again by 1813 to the site of the
Queen's Hotel, Promenade (qv). Presumably the name of Hygeia
House was altered to Vittoria House at about this date (and
after 21 June 1813). Thompson died here in 1820 and was
succeeded in ownership by Robert Morris. Engraving c1813 shown
in Little with symmetrical facade and colonnade to 4 sides.
This provides the earliest datable ironwork in the town. A
notable surviving building from the first phase of development
in the new Spa town.
(Chatwin A: Cheltenham's Ornamental Ironwork: Cheltenham:
1975-1984: 18; Little B: Cheltenham: London: 1952-: 45; The
Buildings of England: Verey D: Gloucestershire: The Vale and
The Forest of Dean: London: 1970-: 143-144).