NUMBERs 1 TO 12 AND ATTACHED RAILINGS, WALLS AND PIERS TO NUMBER 1 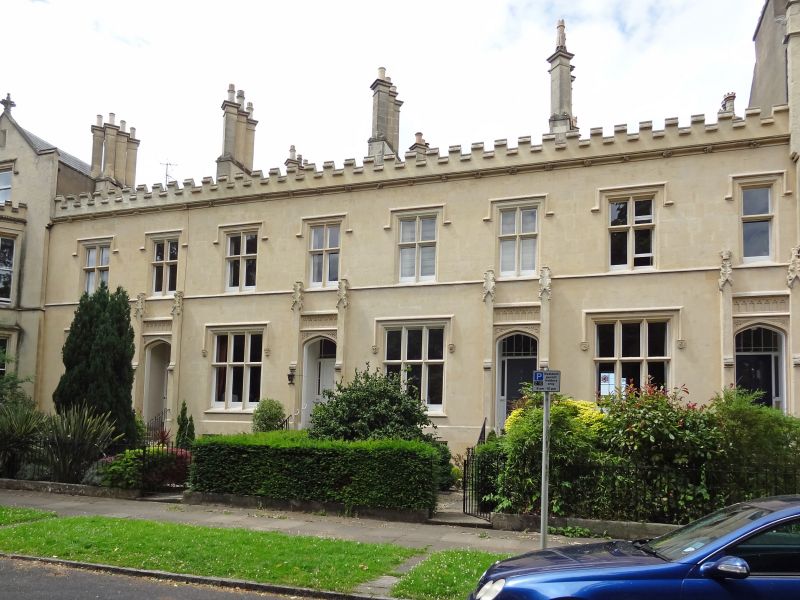 Entry Name: NUMBERs 1 TO 12 AND ATTACHED RAILINGS, WALLS AND PIERS TO NUMBER 1

Terrace of 12 houses, now flats to Nos 6, 11 and 12; with
attached walls, railings and piers at left. 1845-59 (Nos 1-5
built 1845-7, Nos 6-12 built 1856-9). Builders, William
Williams, Elisha Williams and James Williams. Ashlar over
brick with slate roofs, tall left end and party-wall stuccoed
stacks, mainly with cornices; brick wall, stucco over brick
piers and iron railings. Double depth plan with side hallways;
3-lower-storey service ranges at rear.
EXTERIOR: end and 2 centre houses of 3 storeys, otherwise 2
storeys, on basements, 24 first-floor windows (2 per house).
Centre and end ranges break forwards. First floor: end houses
have outer 1/1 sashes, then canted bays through basement,
ground and first floors with 1/1 sashes; centre has two 1/1
sashes between similar canted bays with 1/1 sashes. Bays are
crenellated. Otherwise first floor has 2-light and ground
floor has 3-light mullion and transom windows, all in stepped
reveals and with hoodmoulds, those to first floor with label
stops and those to ground floor with shield stops. Second
floor, mainly 1/1 sashes, those 2 to centre have shared,
stepped hoodmould and central statue in niche. Entrances: 1 to
left, 5 to right, 5 to left and 1 to right: flights of steps
to 4-centre-arched openings with carved decoration to
spandrels, those to ends have hoodmoulds with shield stops,
those 2 to centre with pillar between and shared latticework
frieze, ranges between have off-set buttresses with pinnacles
with finials and arcaded frieze; within are 4- and 5-panel
doors (some upper panels round-arched, some with 4-centred
arched, some with cusped lights) some part-glazed, with
sidelights and overlights with margin-lights and Gothic
glazing bars. Crowning crenellation to inner ranges, outer
houses have gable over bay with finial, central gable between
2 small raised gables with shield decoration. Basement has 1/1
and 2/2 sashes. Rear retains many 6/6 and 2/2 horizontal-pane
sashes.
INTERIOR: reputed to retain original joinery including
panelled shutters and plasterwork.
SUBSIDIARY FEATURES: at left a wall for approx 2m, then gabled
pier with traceried panels, 3m stretch of alternate spearhead

and paired, round-arched railings; similar end pier.
Embellished railings to sides of steps throughout, to central
houses are low stucco walls with pierced arcades.
HISTORICAL NOTE: part of the Pittville Estate, the layout of
which was designed by the architect John Forbes for Joseph
Pitt; although much of this Estate was built 1825-42, this
terrace was built after Pitt's death. Nos 1-5 known in 1848 as
Eton Place. William Charles Macready lived at No.6 from
1860-1873.
All the listed buildings in Wellington Square form a good
group, laid out around a central grassed area. This terrace is
a fine example of 'Regency Gothic' detail applied to an
overall Classical form.
(Blake S: Pittville: 1824-1860: Cheltenham: 1988-: 64).