Columbia Place and Attached Area Railings to Numbers 112 and 122 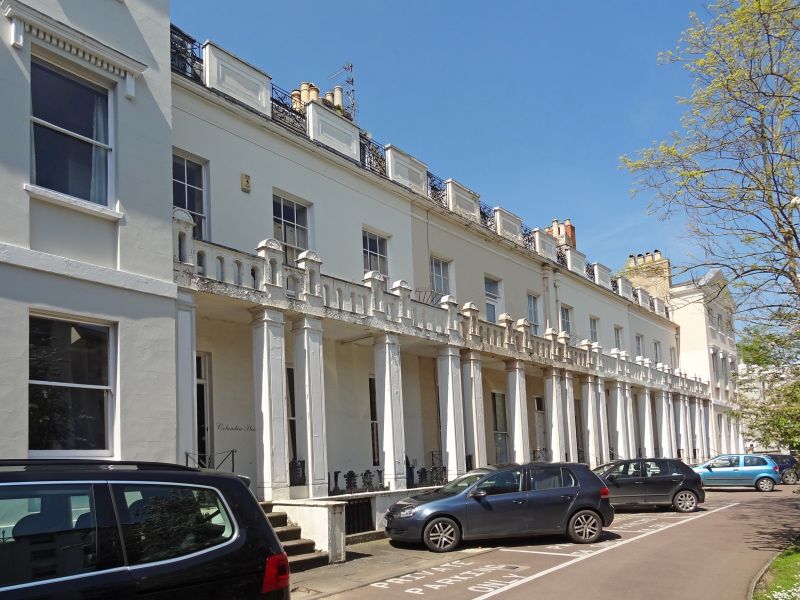 Terrace of 6 houses and attached railings to left, now houses,
flats and offices. 1824-5 with later additions and
alterations. For Thomas Thompson; architect William Jay.
Stucco over brick with slate mansard roof and party-wall brick
and stuccoed stacks and cast- and wrought-iron verandah,
balustrade, balcony dividers and basement grilles.
EXTERIOR: 2 and 3 storeys with basement and attics, 1 + 18
first-floor windows (4 to left, otherwise 3 per house). End
houses break forward, are 3 storeys and pedimented,
incorporating to left a 2-storey entrance bay. Stucco
detailing includes first-floor band to end houses, left end
house has panelled aprons below first-floor windows; all with
crowning moulded band, cornices, and to centre range a coped
parapet with stepped panels. Ground floor has tall 1/1 horned
sashes. First floor has 6/6 sashes where original; 3rd floor
has replacement 1/1 sashes, and with round-arched first-floor
window to left. Entrances alternately to left and right, with
that to right end house to return, steps to 6-panel doors
(several part-glazed), mainly with overlights with
margin-lights, that to left in round-arched recess.
Across centre range and between end ranges a first-floor
pierced balcony on tall, slender square pillars with incised
moulding, forming a piazza to ground floor. Flights of steps,
roll-edged where original, lead to piazza in front of
entrances. Attic has 6/6 sashes where original. Rear retains
6/6 sashes, to No. 118 are tripartite 6/6 between 2/2 sashes.
INTERIOR: to right a narrow-open-well staircase with stick
balusters, otherwise not inspected.
SUBSIDIARY FEATURES: centre range has guards (some damaged) to
piazza with anthemion motif. Grilles hide basement area.
Parapet has wrought-iron balustrades with scrolled rose motif
between panelled stucco balustrade. First-floor balcony
dividers have radial spokes. Area railings to left.
HISTORICAL NOTE: formerly known as Columbia Place, so-named as
Thompson had made his fortune supplying cavalry equipment to
various South American states. In 1826 William Cobbett saw 'a
new row of most gaudy and fantastical dwelling places, called
Columbia Place'. Rowe described them as 'a handsome row of