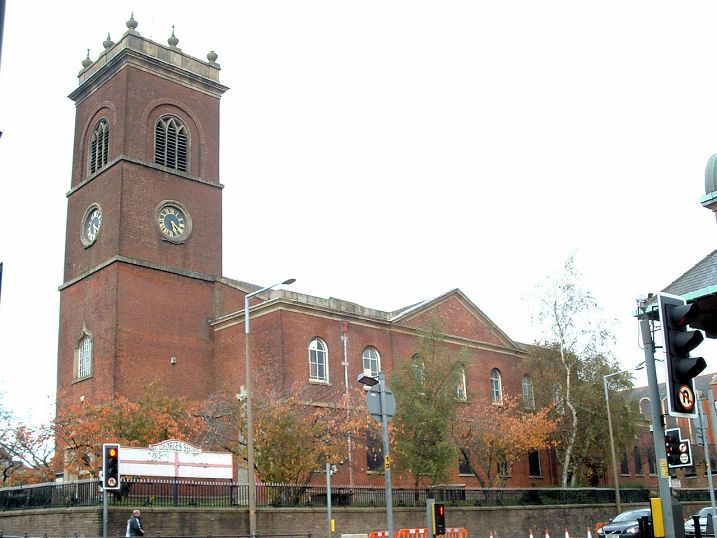 Includes: Church of St George BATH STREET.
Church, now in use as craft centre. 1796 with late C20
alterations. Brick with slate roof and stone dressings. West
tower and single span roof over galleried nave, expressed
externally as 2 storeys; shallow chancel and south chapel
added or rebuilt 1907, by James Simpson.
EXTERIOR: 4 stage tower, with pedimented west doorway with
traceried fanlight; iron-framed ogee window above, and clock
inset in stone. Triple bell-chamber lights beneath segmental
archway in upper stage. Stone parapet with ball finials.
7-bay nave, extended by a single bay to the north-east.
Pedimented over central 4 windows each side. Round arched
windows with margin lights, the window in the north-east
extension in stone architrave. West doors each side, with
diagonal panelling and pedimented cases. Interlace tracery in
fanlights.
Early C20 chancel in flamboyant interpretation of the
classical style; Pedimented feature applied to east wall, with
round arched main window with oculus above, in segmentally
arched recess with elongated voussoirs, and panelled pilasters
each side. Venetian window in each wall of south chapel.
INTERIOR: 7 bays, with galleries to west, north and south.
Wood panelling encasing supporting pillars, and panelled
parapet to galleries. Segmentally arched ceiling, divided into
plaster panels with simple mouldings.
Low stone wall to chancel which is raised up steps flanked by
heavy volutes as balusters.
Coupled piers divide the chancel into 2 bays, expressed by
enriched plasterwork to segmentally arched ceiling. Paired
arches to chapel to south, with organ chamber to north.
Pilasters flank the east window, which has pictorial stained
glass as a private war memorial.
Chancel furniture in Renaissance style, including choir stalls
and ornate high pedestal pulpit with long curved staircase;
altar rails and altar piece with central niche below broken
pediment.
(BOE: Pevsner N: South Lancashire: Harmondsworth: 1969-).