Former Church of the Holy Trinity 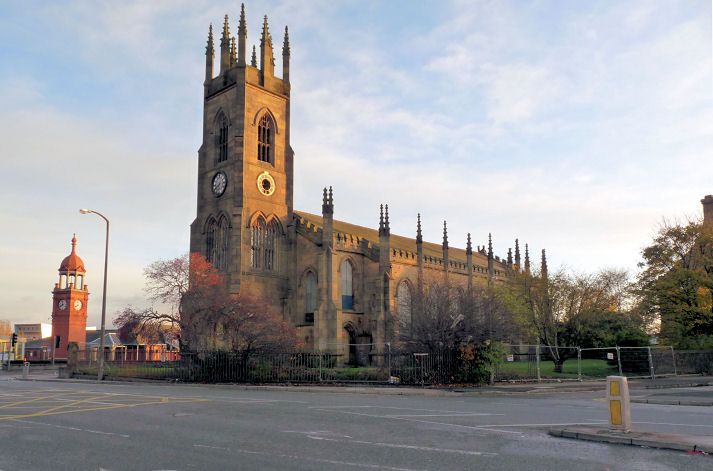 Anglican church, now redundant. 1823-5. Philip Hardwick,
architect. Ashlar faced with slate roofs. 'Commissioners'
Gothic style with Perpendicular detail. West tower, galleried
nave with shallow chancel.
EXTERIOR: 4 stage tower, with angle buttresses and triple
chamfered west doorway with paired tiered windows above.
Clock, and 3-light bell-chamber opening. Angle pinnacles to
parapet. North and south doors in narrow bay to east of tower,
(internally a narthex with stairs to gallery), triple
chamfered doorways with tiered 3-light windows above.
Wider nave of 7 bays divided by buttresses with terminal
crocketed pinnacles, and embattled parapet running between
them, and a 3-light tiered window in each bay.
Shallow chancel with foiled lancet window to north and south,
9-light east window, and flat roofed vestry (part of the
original build) to east.
INTERIOR: Many fixtures and fititngs removed c1997.
Double-stair to gallery in western vestibule leading to
gallery to west, south and north of nave, which has arcades of
5 bays with composite shafts carrying 4-centred arches.
Vaulted ceiling. 2 bays to integral choir which has
raised-floor level.
Wall paintings each side of chancel arch, depicting the
nativity and the ascension. Vaulted ceiling to shallow
chancel, which has encaustic tiled floor.
Despite the removal of internal fixtures and fittings, this
early C19 church remains a distinguished and well-detailed
example of the 'Commissioners Gothic' style.