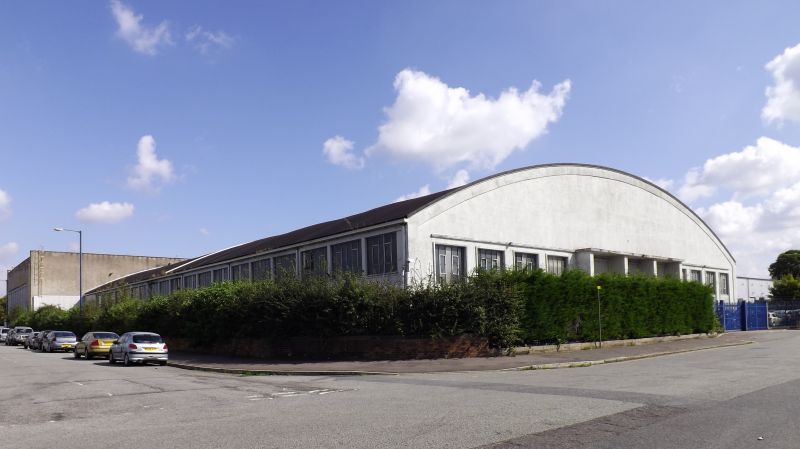 The garage with accommodation for one hundred double-decker buses was planned to serve as a depot for the Manchester Corporation bus services to the Wythenshawe Housing Estate, but it was taken over by the Ministry of Aircraft Production immediately on completion in 1942 for the production of A V Roe's Lancaster aircraft. It is one of the first reinforced concrete shell roof structures to be built in England. Chisarc and Shell D Ltd were the British patentees, but as the system was both innovatory and German they found few clients in the late 1930s. It is a smaller, but earlier and more daring shell roof than that at Bournemouth, and anticipates the better-known bus garage at Stockwell, LB Lambeth (II*). The late 1930s and early 1950s saw the building of very many bus garages as tram services gave way to buses, and shell construction was a very cheap way of achieving broad, uninterrupted spans. The general equations for shell domes and cylindrical shell roofs were first published in England in 1930, and again in August 1935. However, this was the pioneering example of the means of construction, and was widely influential in the years after the war when steel, timber and bricks were in short supply.