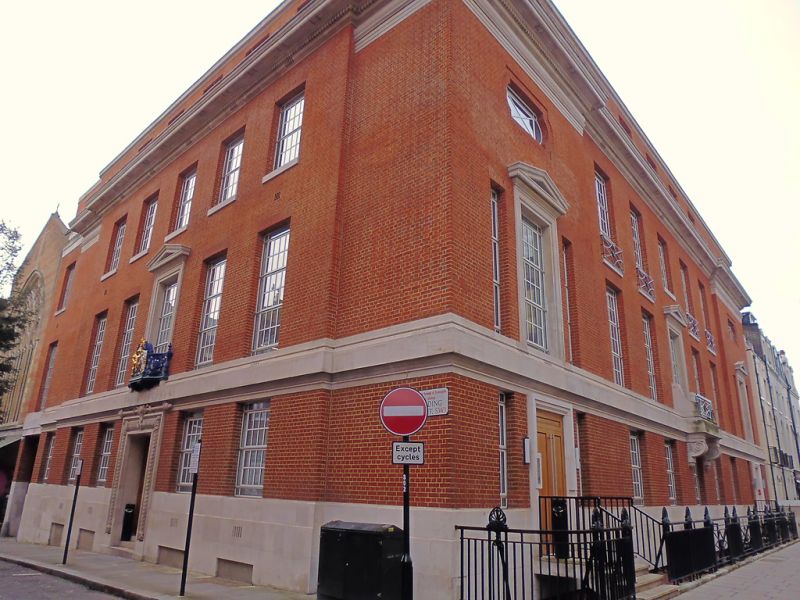 Telephone Exchange. 1924 by John H. Markham FRIBA for HM Office of Works. Neo-Georgian telephone exchange faced in red brick (laid in English bond) and Portland stone; cast iron Neo-Grec railings, cast iron royal coat of arms over entrance, metal windows, roof not visible. Three storeys with attic and basement. Entrance front on Sedding Street: five-bay central section, blind side bays, single bay continuation to left; two-bay south-facing return. Portland stone plinth, plat band at first floor, heavy dentil cornice, coping to parapet. Stone door surround with guilloche ornament with fluted rod above, from which is suspended fillets with hand-held telephone sets. Tall windows to first floor with gauged brick arches; central window has a stone surround and pediment, and a cast iron balcony with heavy Baroque foliage supporting the royal coat of arms and urn finials. All windows are metal-framed. Second floor windows with stone cills. Northern elevation to Sloane Terrace with projecting bays at either end and a central five-bay section. Tripartite windows to end bays on ground and first floors, the latter with pediments. Ventilation openings with ornamental cast iron screens at second floor level. Side bays have lobed rectangular windows to second floors, main central section has windows with stone cills and gauged arches. Attic windows to central section, shallow pyramidal-capped stone terminations to side bays. Cast iron railings with anthemion finials and lozenge-decorated panels in front of area. Interior not inspected. HISTORY: this was built as the Sloane Telephone Exchange: a drawing of the building was exhibited at the 1924 Royal Academy exhibition (see The Builder May 30 1924, 868). An exceptionally good example of the Office of Works' characteristic Neo-Georgian output, displaying its attention to detail, high quality of construction, and subtle use of decoration.