A Grade II Listed Building in Tonge with the Haulgh, Bolton 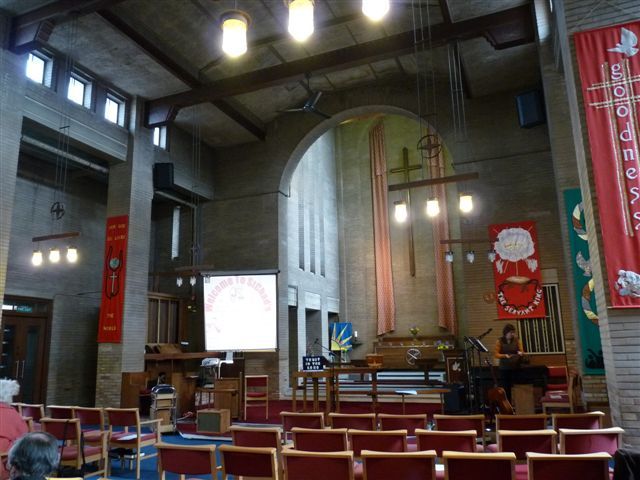 II
Church. 1937. By R. Nickson. Red brick with high blue brick plinth and low pitch copper roofs. Modern style with Scandinavian influences. Tall chancel, east vestries and rooms, nave with aisles, west baptistery and north west campanile. Mainly tall narrow metal-framed windows. The east end is blank with incised cross high in the gable. Tall triple windows to sides of chancel with much lower vestries and rooms surrounding it. The aisles also have tall windows and there is a narrow clerestory above, which has a long row of small windows emphasising the horizontal line. The aisles project beyond the west end where there are four tall windows to the gable wall. The baptistery is below. There is an entrance in the south west corner and in the north west corner is the campanile. This has an entrance on the west side then an arched window above and then tall blank walling up to the bell stage which is stepped-in, white-washed, and has tall bell openings.
INTERIOR. The high soaring chancel is lit from either side and has a round arch to the nave. The long nave was partitioned at halfway in 1987 but the square nave piers all survive supporting the clerestory and nave roof. This has massive partly decorated tie beams and the roof is partly shallow canted. Some contemporary fittings survive.
This fine and impressive design remains effective although the partition has divided the nave. It was published in 50 Modern Churches.
50 Modern Churches, Incorporated Church Building Society, London, 1945, p.70-3.