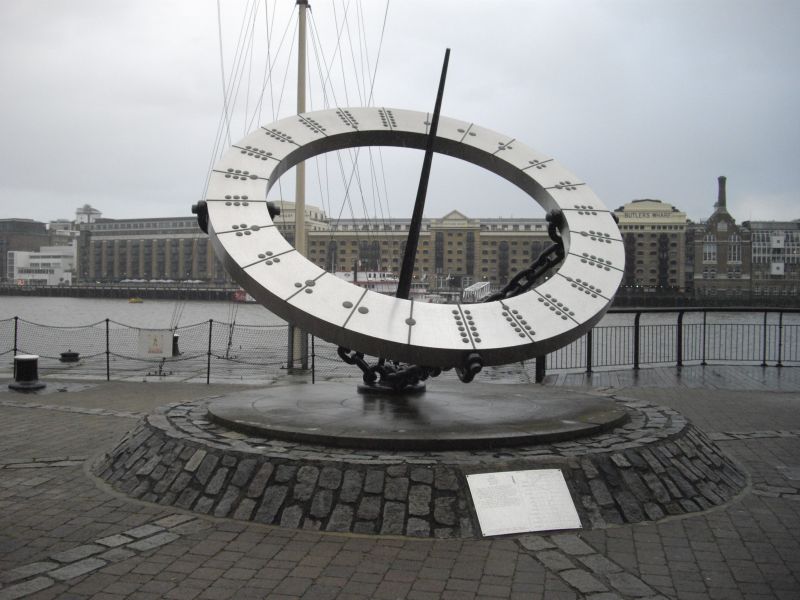 GV II
Sundial sculpture. 1973 by Wendy Taylor, with funding from the J Lyons Group. A steel sundial like a giant washer, on which the hours are marked with raised dots. It is supported on three chains and pierced by a gnomon or pointer designed to resemble a large dockyard nail, all of which spring from a single point. Descriptive plaque to front.

A modern basic equinoctial sundial, or one aligned on the plane of the equator, it is an 'upper' equinoctial dial that shows the time only while the sun is north of the equator. Taylor has reduced the concept of the sundial to its most elemental.

Wendy Taylor (1945- ) was working in a studio at St Katharine's Docks in 1971 when the Peter Stuyvesant Foundation launched a programme of art for six British cities. London was not selected, but Taylor decided to produce her own work for St Katharine's Docks, then being conserved and redeveloped for offices and leisure. Her selected site outside the Tower Hotel has made this one of the most prominent of London sculptures, and its subject reflects the proximity of the Greenwich meridian, so important for timepieces. It is significant in Taylor's own development of large-scale public sculptures, particularly in her work with chains and industrial objects. It is also one of the earliest and most witty of the large public pieces created in the 1970s and initiated an on-going series of new sundials in public places.