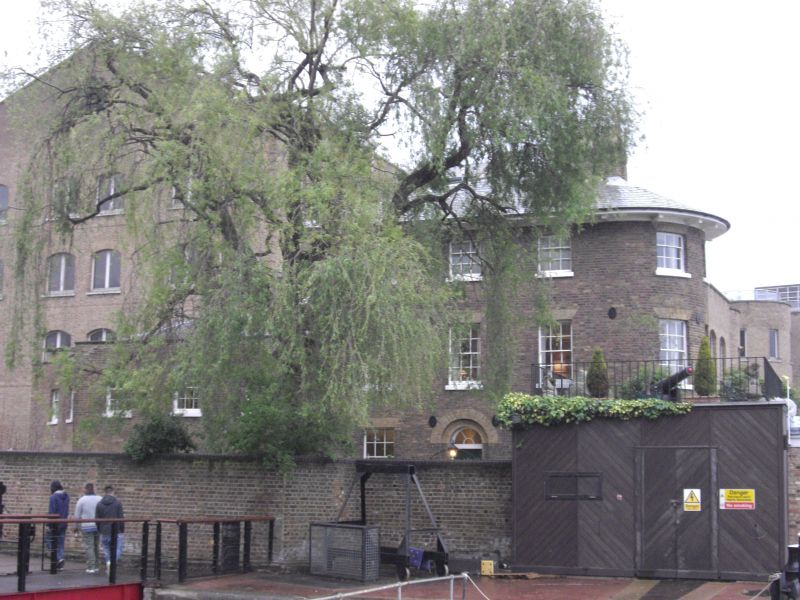 EXTERIOR: three storeys and basement, with two storey range attached to north. The main west elevation has three window bays with a central door at ground floor, which has a semi-circular fanlight over a six-panelled door and set within a double arch. This wall returns to the south, river front with an elegant wide bow of a further three window bays, the sashes gently curved in their openings. Sash windows are slightly recessed; those to ground and first floor of six-over-six panes, second floor of three-over-six panes; all are under gauged flat arches. The roof of the bow is a shallow conical structure, and the deep bracketed eaves continues around the curve. There is a single bay three-storey range to the east with a parapet, roof-top balcony and set back roof extension. A tall chimney rises from the east side of the curved bow. Immediately to east is 1970s imitation of former early-C19 warehouses (Not listed).

Attached to north is a two storey extension of three window bays, also with a central entrance. The ground floor flanking windows are tripartite sashes under wide gauged flat arches; to the first floor is a trio of four-over-six panes windows. This range returns to the north with a curved wall of three bays (formerly housing the customs office) and comprising a central door (formerly a window), a wide tripartite sash under a wide gauged flat arch to the right (formerly a door), and extended one bay to left at first floor level in a similar style.

INTERIOR: The original plan form largely survives, with the primary room on each floor set within the bow, the Dockmaster's office now the kitchen at ground floor and bedrooms above. The basement is reached by stairs and forms an additional room. Full-height stair with stick balusters and ramped handrail. Some original joinery, cornices, panelled shutters, and fireplaces, with some later-C19 and C20 replacements in a traditional style.

SUBSIDIARY FEATURES: Iron railings with spear heads enclose the area below and lead up to the entrance steps. To west is an original cast-iron bollard inscribed 'St. Katharine Docks. 1828'. Attached brick wall with arched entrance leading to area below is late-C20 and not of special interest.

HISTORY: The Dockmaster's House was built in 1828, the year St Katharine's Docks was opened. The dock was built by the engineer Thomas Telford and the architect Philip Hardwick in 1827-8. Authorised by an Act of Parliament in 1825, they replaced the medieval hospital of St Katharine and involved the clearance of houses in an area of some deprivation. Although well used, the docks were not a commercial success as they were unable to accommodate large ships. The docks were badly damaged during WWII and became the first London docks to be closed (in 1968). Most of the original warehouses were demolished and replaced by modern commercial buildings in the early 1970s, with the docks themselves becoming a marina.

The Dockmaster was responsible for running the dock on a day to day basis and so living next to the dock was essential. The position involved: directing the movement of cargo and vessels; keeping accounts of quantities and types of goods; recruitment and paying staff; inspecting the dock; and ensuring the safety of workers. The building was designed with its occupant's responsibilities in mind. It has a room which was used as an office facing the entrance to the dock from where the Dockmaster would oversee and supervise activities. The house also has a bow front facing the river which allowed the Dockmaster sight of passing river traffic. It is likely the Dockmaster's House, like the dock itself, was designed by Philip Hardwick (1792-1870), who was an original member of the Royal Institute of British Architects and the architect of several works of major significance including the Euston Arch.

SUMMARY OF IMPORTANCE: The former Dockmaster's House of St Katharine's Docks survives well. Its elegant three-storey bow and the entrance facing the dock strongly reflects the original purpose of the building: for the Dockmaster to oversee and supervise dock activities as well as keep sight of passing river traffic. It has special architectural interest for its well surviving early-C19 exterior, as well as the interior plan form and some original fittings such as the staircase. Like the other listed dockmaster's houses along the Thames: Coldharbour of 1826, Blackwall Basin of 1819, and Wapping Pier head of 1811, the St. Katharine's example is an important reminder of the international prominence of London's docks and the Thames as a busy commercial thoroughfare. The context has been dampened by World War II damage and 1970s redevelopment following the early closure of the docks in 1968. There is also strong group value with the other listed components of St. Katharine's Dock: Warehouses C and I, the house beside No 6 gate and the boundary walls, gate piers and footbridge.