The Parish Church of St Andrew 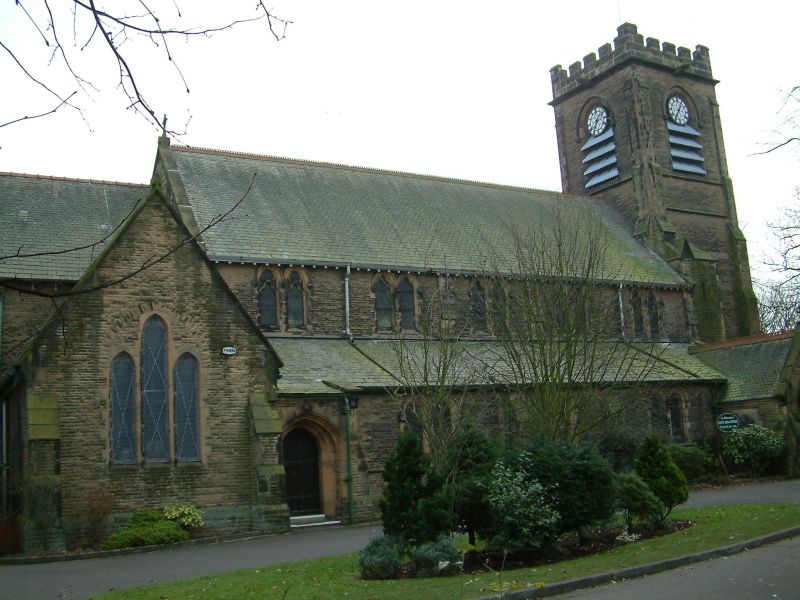 II
Anglican church, 1878-80, extended 1998 designed by F Doyle. Built of rock-faced dressed coursed stone with ashlar quoins and dressings and graduated slate roof, in gothic style with angle buttressess and plinth. Chancel, north and south transepts, tower, nave and aisles, porch to north and attached vestry and 1998 hall to south side.
EXTERIOR: One bay chancel with tri-partite drop-arch east window with hood mould and single drop-arch window to either side. North transept has tripartite drop-arch window in gable end. South transept has 2-light four-centred arch window on east side and rose window in gable end above link arched doorway to vestry which is a hipped roofed square building with 3-light traceried window in square surround. North aisle has drop-arched door adjacent to transept, and windows alternating 2 and 3-light with intervening buttresses. South aisle abuts 1998 hall. Nave has paired clerestorey windows, those nearest the chancel with plate tracery. Porch at west end of north transept with gabled end and drop-arched doorway and wooden door. Tower at west end with battlemented parapet, 4-sided clock with louvred window below, and stair turret in north-east corner. Large west window is drop-arched with 3 lights with a double plinth below, and two slit windows in tower above.
INTERIOR: Chancel has stained glass in tripartite east window. White marble reredos with cusped niches, finials and carved figures behind altar. Decoratively carved wooden choir stalls and wooden reading desk in the shape of an eagle. Octagonal pulpit in white marble with relief carving in panels and coloured marble shafts. Nave arcade has plain columns with capitals carved with foliage, supporting wide drop-arched openings to aisles. Original wooden bench pews in nave and aisles. Windows of aisles and north transept have good quality stained glass, that in west wall of south aisle having been transferred from south wall when a new doorway was constructed into the hall built in 1998. South transept is divided from the rest of the church by carved wood and glass screens, including a door with geometric patterned stained glass, leading to the vestry. Vestry has pyramidal roof structure with exposed converging trusses, and simple plate tracery to windows. Nave roof has scissor-beam trusses supported on corbels above the columns of the nave arcade, and ailses have lean-to ceilings. West end of nave has a large arched opening to the tower, with a tripartite window above. Tower area has been partitioned off with a glass screen to provide a children's area. West window has stained glass with brass plaque below commemorating the dead of World War One. Door to tower stair, chamber above with exposed snecked stone and brick arched lintels to slit windows, containing exposed workings of the clock.
HISTORY: The church was opened in 1880, built to replace a much smaller church which still sits in the grounds. This church, now known as the Unsworth Chapel, is listed II* and dates to around 1400. The community hall on the south side of the church was built in 1998.

SUMMARY OF IMPORTANCE
This 1880 church, by the architect J F Doyle, is a good example of late nineteenth century gothic style, with some excellent stained glass and other finely executed fittings, combining to produce an harmonious composition. It thereby achieves a successful blend with both its semi-rural environment and with other nearby listed structures to form a well-balanced group.