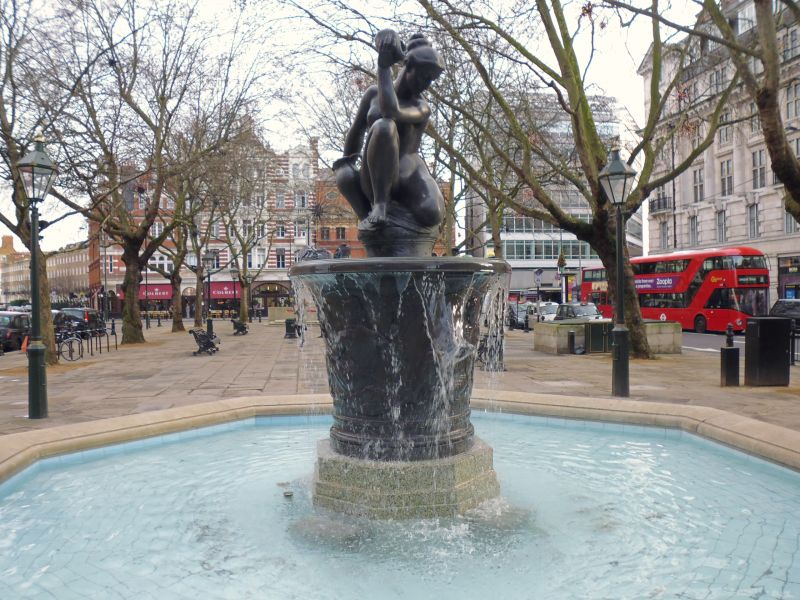 II
Fountain, 1953, by Gilbert Ledward R.A. (1888-1960). The Venus Fountain in Sloane Square consists of the kneeling figure of Venus in bronze holding a vase and pouring water from a conch shell, surmounting a large bronze vase-shaped basin, which sits on a narrow three step stone base within an octagonal stone pool lined with blue ceramic tiles. The Venus depicted here is correctly proportioned, she is seen in a classical pose and has a classical purity of line, but reference is also made to the exotic 'Balinese type' figures being depicted in sculpture in the interwar period.

The basin is decorated with a relief depicting Charles II and Nell Gwynn seated by the Thames. Charles II picks fruit from a tree, whilst Nell Gwynn fans herself. An impish cupid sits nearby with two arrows ready, a deer and hound run in the background, and a swan swims by on the Thames.

The inscription around the top of the basin reads, "Sweet Thames run softly, till I end my song", from 'Prothalamion' by Edmund Spenser (1552-1599). The poem was a spousal verse written to honour a double marriage, the title meaning a song preceding the marriage ceremony. The Kings Road was built during Charles II's reign, and to the west, was the house where his mistress stayed on occasion. Catherine Moriarty in her recent book on the sculpture of Ledward writes, "Ledward felt it was not inappropriate that his fountain, a fountain to lovers, should be placed on the route that the King and his mistress 'must have traversed so often" (p.92).

The inscription at the bottom of the basin reads: 'GLIBERT LEDWARD RA 1952', and beneath this, 'PRESENTED BY THE ROYAL ACADEMY OF ARTS THROUGH THE LEIGHTON FUND'.

HISTORY: Gilbert Ledward is one of perhaps an almost forgotten generation of C20 sculptors. Born in Chelsea, he began training as a sculptor at the Royal College of Art in 1905, where he studied under Edouard Lanteri. His fellow students included Charles Sargeant Jagger, Charles Wheeler and William McMillan, a generation who were to occupy a transitory position between the late C19 New Sculptors and the C20 modernists, such as Henry Moore and Barbara Hepworth.

SUMMARY OF IMPORTANCE: The Venus Fountain, Sloane Square, is of special interest as a beautifully executed sculptural piece by the prominent C20 sculptor Gilbert Ledward. It comprises a bronze kneeling Venus which references both the classical and 'exotic' nude, upon a bronze vase shaped basin decorated with a whimsical relief of Charles II and Nell Gwynn. The fountain has local connections and the precedent has already been set for the listing of such fountains from the immediate pre and post-war period.