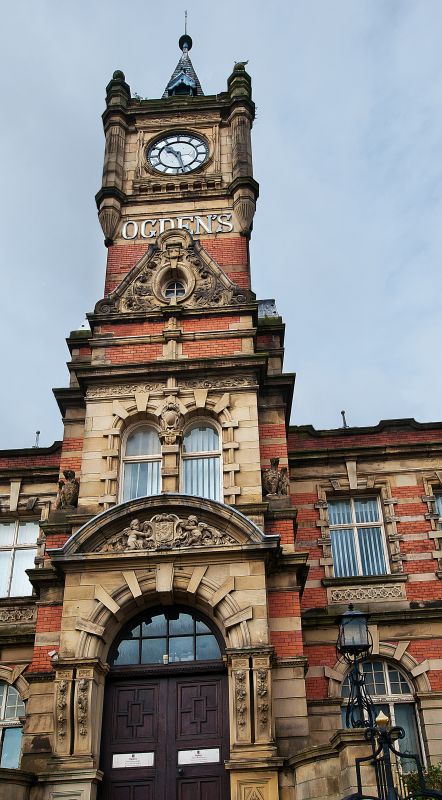 PLAN: Central corridor with rooms to front and rear, and to each end of building.

HISTORY: Ogden-Imperial Tobacco Ltd, Liverpool, began life as a local private concern in 1859/60 when Thomas Ogden started a tobacconist business from his premises on 54 Park Lane where he was also a leather dealer. In the following years Ogden opened further shops and also became a cigar importer, culminating in 1868 in the acquisition of premises in St James Street, which became his first tobacco factory. A second factory opened in Cornwallis Street in 1870 and within 20 years Ogden's had expanded to include 6 factories and stores in Liverpool.
Shortly before his death in 1890 Thomas Ogden converted the business into a limited company known as T. Ogden Ltd (Ogden Ltd. after his death). Following his death Thomas' two sons, Thomas Ogden junior and William Barker Ogden took over the running of the business. Six dispersed factories soon became uneconomical and following the issuing of shares in 1895 capital was raised in 1897 to build a new factory and offices at Boundary Lane, which opened in 1899.
Ogden Ltd. was the first company in the world to introduce the idea of collectable illustrated cigarette cards, and also helped to found the National Association of Tobacco Manufacturers in 1898.
In 1901 James B Duke, head of the American Tobacco Company acquired Ogden's and extended the office block by adding an additional storey to the side wings. For just over a year Ogden's became the pivotal firm in the American Tobacco Company's attempts to break into and dominate the English tobacco industry. In 1902 Ogden Ltd. was sold to Imperial Tobacco and became one of their branches. During the mid C20 several tobacco companies merged with Ogden's.
In 1962 Ogden's ceased production of cigarettes and concentrated on pipe tobacco, hand-rolled tobacco and snuffs (the latter from 1989 onwards) and in 1978 a modern factory building was constructed alongside West Derby Road. In the 1980s the Boundary Lane site underwent £1 million of improvement works, which provided new machinery and resulted in the demolition of a long 4-storey building on the W side of the site. Further change occurred in the 1990s when the engineering department building became a bonded warehouse and the former stables and garages became a staff restaurant and packing area.
Imperial Tobacco is now the world's fourth largest international tobacco company. However, following changes in the market and production costs it was announced in July 2006 that the Liverpool site would cease production and close. The factory finally closed in March 2007.

REASONS FOR DESIGNATION DECISION:
The office block at Ogden-Imperial Tobacco Ltd is designated at grade II for the following principal reasons:
* An impressive example of late C19 eclectic Queen Anne style
* The high quality design and craftsmanship displayed both externally and internally
* The design and decorative detail of the building, particularly externally to the main principal elevation, successfully conveys the company's original status as one of the largest tobacco manufacturers in the country