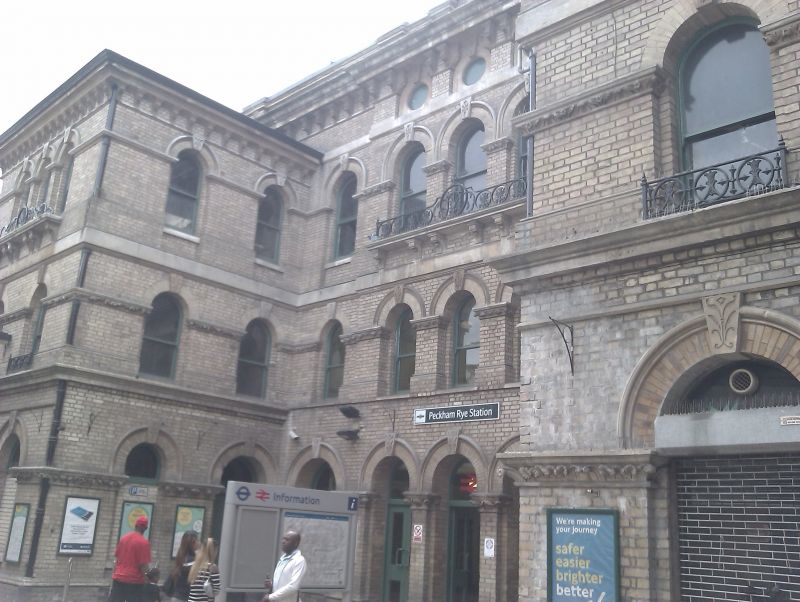 MATERIALS: The approximately H-shaped building is in a Continental Renaissance style and is built with stock brick and stone dressings.

EXTERIOR: The façade is impressive, of three storeys with a central section of five round-headed windows and projecting wings of two windows apiece. There is a boldly moulded bracket cornice and several of the windows have cast-iron balconettes. The roof has a curved profile and a central section in a French mansard style; the structure and form survive, despite the roof having been recovered. The other elevations are utilitarian and are of lesser interest, those to the east and west concealed by the viaducts of the two railway lines and that to the south disfigured by an extension of the mid-C20. The platforms have been altered and are not of special interest.

INTERIOR: contains three areas of special interest. Firstly, a vast, double-height booking office with a coved cornice and the original ticket booths with a later opening in the rear wall of the mid-C20 to provide access to the platforms via the new extension (this, and the doors to the booking hall which have been replaced and are of lesser interest). Secondly, a dramatic stone staircase in the western wing with elaborate cast-iron balusters which is a work of considerable artistic quality and relates to Driver's published lectures on the use of cast-iron. Thirdly, the vast former first-class waiting room, situated above the booking office, which has the barrel-vaulted roof structure exposed and remnants of dado panelling. The other areas, including the mid-C20 extension, are of lesser interest. The interior of the eastern wing, which has been leased as a commercial outlet, was not inspected and may contain further features of special interest.

HISTORY: Peckham Rye Station was built on the junction of two lines: the London, Brighton and South Coast Railway (LBSCR) and the London, Chatham and Dover Railway. The station was built for the former and is in the house style, of stock brick construction and inspired by the architecture of the Italian and French Renaissances, used at other stations such as Denmark Hill and Battersea Park, and at the Grosvenor Hotel, fronting the line's terminus at Victoria Station. The design of the station is known to be by Charles Henry Driver (1832-1900) although the plans were signed by the LBSCR Chief Engineer, Robert Jacomb-Hood (1822-1900).

Of the series of suburban stations opening by the LBSCR in London in the 1860s only Grosvenor Road (disused), Peckham Rye, Denmark Hill and Battersea Park survive; the latter two are listed at Grade II. Peckham Rye, when it was built, was at least the equal of Denmark Hill and much grander than Battersea Park. Like Denmark Hill, it had much ironwork in the form of colonettes with decorated spandrels supporting the platform canopies, ornamental cresting along the roofline, and a iron canopy projecting from the central pavilion of the tripartite street elevation in a foliate design. Peckham Rye also had grand railings and canopies over two sides of its forecourt. The architecture of Peckham Rye was inspired by the Grosvenor Hotel at Victoria station, the line's terminus, in particular its French Renaissance style with a mansard roof. The Grosvenor Hotel, built 1860-61 by J.T Knowles, was closely associated with the railway comapny and one of the first buildings in London to have a French pavilion roof. In emulating this building Driver not only brought consistency to the LBSCR's estate, he also placed Peckham Rye Station at the height of architectural fashion in the 1860s, unusual for a suburban station.

In the period between 1938 and 1951 much of the ironwork was removed and the rear courtyard to the H-shaped building was filled in with a staircase and corridor giving alternative access to the platforms. At around the same time shops were built in the immediate vicinity of the principal elevation to the north, hemming in the station and diminishing the impact of its architecture on the streetscape.

Charles Henry Driver was an architect who, his obituary says 'was largely employed by engineers', some of whom were the leading figures of the C19 such as Sir Joseph Bazalgette with whom Driver worked on the Abbey Mills and Crossness Pumping Stations and the Victoria Embankment. Through his collaboration with engineers, Driver was well-placed to explore the aesthetic qualities of iron as both a decorative and a structural material. Driver lectured to the RIBA and the Society of Civil and Mechanical Engineers on the subject in the 1870s and positioned himself in the vanguard of architects and engineers who were researching the material. He also worked for a number of iron foundries on patterns and designs. Driver's reputation was international. In the 1870s he designed an impressive market building which was constructed in Manchester and shipped to Santiago, Chile, one of the major prefabricated buildings of the late-C19. He also designed the Estacao da Luz railway station in Sao Paulo, Brazil.

The ironwork which survives at Peckham Rye station relates to Driver's writings about the use of cast iron. Driver wrote: 'if scroll-work ornamentation is used, all curves and sprays and leaves should spring from the main stem in a natural way, growing out of it, and not with appearance of being fastened on ... in foliation it should rather be flattened out, and the different veinings of markings scooped or dug out, as they would, in fact, be done in carved wood'. The cast iron balustrades of the stone staircase are an eloquent expression of Driver's ideas, having a clear naturalistic appearance and appearing to grow from the main baluster stem. The balconettes relate to his description of expressing foliage like carved wood and each leaf is set in a circular frame. What is remarkable about Driver's work at Peckham Rye is its virtuosity. Where the ironwork for most railway stations would have been to a standard design selected from a catalogue, the staircase and balconettes at Peckham Rye are specially designed by Driver for that station.

SUMMARY OF IMPORTANCE: Peckham Rye Station is an impressive station and is one of only four suburban stations on the London, Brighton and South Coast Railway in London which survive in the house style of the 1860s, which was defined by the use of stock brick, round arched windows and bracketed cornices in a Continental Renaissance style. The mid-Victorian period was an age of ambition and continuing expansion by the railway companies, and they typically sought to mark their identity architecturally. Peckham Rye station is of special interest as representing this characteristic in railway architecture of the age. Furthermore, the building is of special interest as the work of a significant architect, Charles Henry Driver, whose work at Peckham Rye Station, in particular the grand stone and cast-iron staircase and the balconettes on the principal elevation, can be related to his lectures on the decorative and structural qualities of cast iron in the 1870s. The special interest is concentrated in the principal elevation and the three public spaces (the booking hall, the staircase and the waiting room) described above; the other areas and platforms are of lesser or no interest.
TQ3418676326