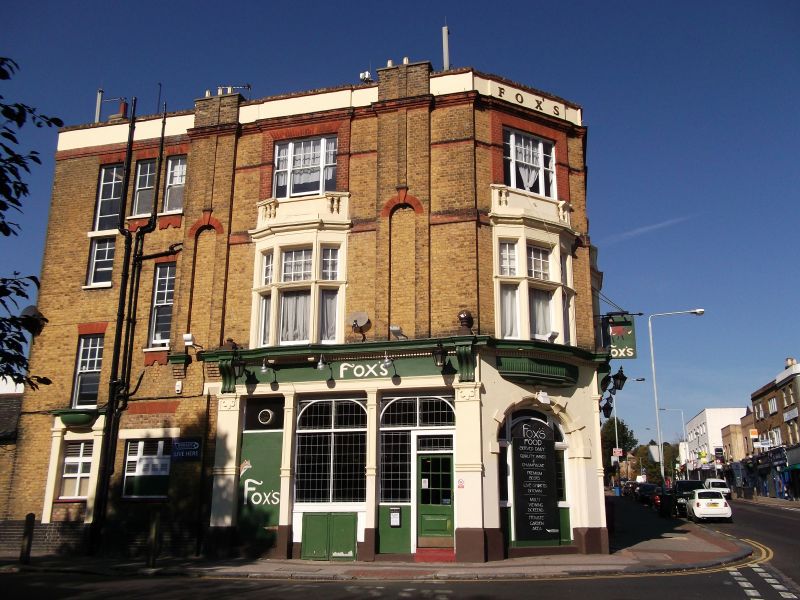 II
Parade of five shops with apartments above, c1896, by Alexander Hennell. Minor later alterations mostly at ground floor level. The buildings are numbered slightly oddly with two of the five buildings having two numbers. From north to south, the numbers are: 134, 136, 138/140, 142/144 and 146.

EXTERIOR: High Street Buildings is a Queen Anne style terrace of three storeys, rising to four in the central part, in red brick with extensive buff terracotta dressings. While the plan is fairly typical, as determined by the five plots available along the road, the detailing is dramatic particularly along the roofline with its Flemish-style gables and Gothic pinnacles. The façade is symmetrical and on the upper storeys comprises the following: a central bay with shallow bow mullion and transom windows and terracotta bands inscribed with 'High Street Buildings' and a carved frieze of garlands; flanked by two bays with further mullion and transom windows, this time with pediments and a cartouche, and terracotta details; two further bays with a carved frieze of foliage and cartouches which terminate the elevation. At ground floor are shops divided by oversized pilasters with alternating large and small quoins and a carved console; all have an attractive green glazing. Three out of the five original shop fronts survive (Nos. 134, 142/144 and 146), each having a recessed central entrance with mosaic floor to the shop, two display windows with metal surrounds, and separate entrance to the accommodation to the side. The shop fronts to Nos. 136 and 138/140 are modern.

HISTORY: Kirkdale is the former main road from central London to Sydenham and was hence a well-used route, particularly after 1852 when the Crystal Palace exhibition hall was moved to Sydenham from Hyde Park. Along with the therapeutic springs discovered near the present Wells Park Road in the 1640s, the Palace and its park made Sydenham a popular destination for Londoners at leisure. Kirkdale, which was originally known as Sydenham Hill, is shown on historic maps including J. Cary's "Fifteen miles around London" published in 1786 and Edward Stanford's "London and its Suburbs" of 1862. The latter map depicts the precursors of the public house and High Street Buildings: a corner building labelled "Fox and Hounds" and a terrace running north from it. The pub was rebuilt in the late 1880s and the terrace c1896.

REASONS FOR DESIGNATION: High Street Buildings are listed for the following principal reasons:
* special architectural interest for their attractive free Queen Anne style architecture, dramatic roofline, and presence in the streetscape;
* good use of materials particularly the extensive buff terracotta dressings;
* designed by a locally-significant architect, Alexander Hennell, who has other listed buildings to his name;
* good survival of original features including three of the five late C19 shop fronts.