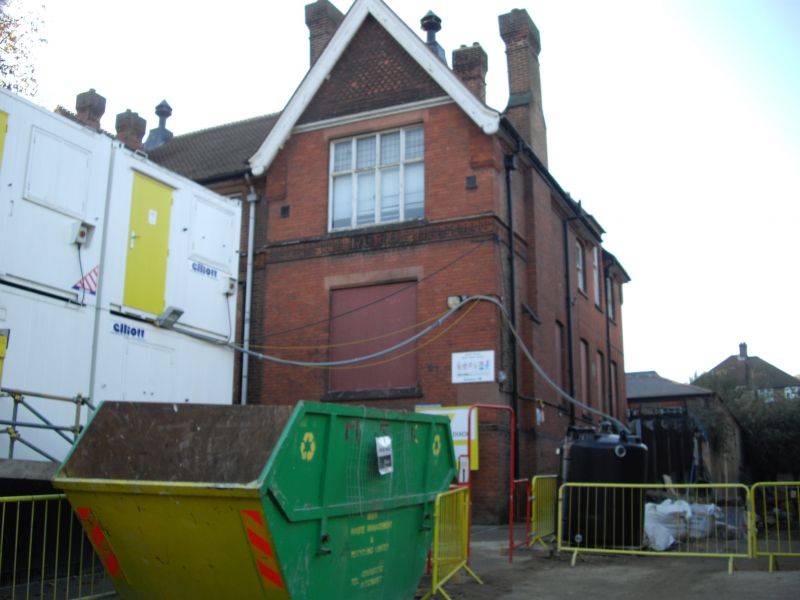 EXTERIOR: Louise House is set back from Dartmouth Road, as is Forest Hill Library, which it almost abuts to the north. The building is in the Domestic Revival style and is distinct from its grander, municipal neighbours for its homely appearance, created through the use of tall chimneys, tile-hung gables, timber bargeboards and terracotta diapering. The brick building has red rubbed brick and sandstone dressings to the façade and returns and a pitched roof with two cross gables, the larger one to the south. Its function is identified through Gothic lettering reading 'GIRLS INDUSTRIAL HOME' running across the band of terracotta diapering in a vine design which divides the ground from the first floor; the section reading 'INDUSTRIAL' was removed in the 1930s but the letters are still traceable. The windows are four-, six-, or eight-light timber mullion and transoms with leaded panes in the upper lights. Steps lead up to the front entrance, placed off-centre, which has a pointed arch of rubbed red brick with a terracotta hood mould, a iron half-grille with a design of tracery arches and sunflowers, and a recessed porch with encaustic tiled floor. The original timber door, with coloured glass fanlight and marginal glazing survives. The rear of the building is plainer, of yellow stock brick with red rubbed brick details and timber sash windows as well as some mullion and transoms; there has been a small single storey later extension to the rear. The foundation stone records that the building was opened by HRH Princess Louise, Marchioness of Lorne on June 17 1890 and notes the name of the architect and builder. The former laundry block, a stock brick with red rubbed brick window arches, survives in the rear grounds.

INTERIOR: There have been relatively few alterations to the building. The rough arrangement of rooms survives, with the entrance hall leading to a skylit stairwell at the rear of the building, retaining its original staircase with metal balustrade (though this has had an additional metal balustrade added in more recent years). To the left of the entrance hall is a large room, likely to have been the dining room, and to the right a series of smaller rooms, presumably services, offices and accommodation for the Matron. The upper floor contains two large rooms running along the cross gables of the building which would have served as dormitories; there are windows in the internal walls looking into the dormitories from a smaller room, perhaps to allow the girls to be monitored by the Matron. A number of original timber doors with tall three-light fanlights above survive throughout the building.

HISTORY: Following the Industrial Schools Act of 1857, institutions like Louise House were established to house vagrant, destitute and disorderly children. Industrial schools were principally homes for children, who attended the local school each day, and so developments in educational provision like the Elementary Education Act of 1870 did not undermine the necessity of such institutions. The majority of industrial schools were privately funded and operated, although subject to official inspection and licensing.

An industrial home for boys was established in Rojack Road, Forest Hill in 1873, and one for girls in the same street in 1881. The children were fed, clothed and housed as well as taught a skill in order that they might earn a living upon leaving the home: boot-making and firewood chopping (for the boys) or domestic service and laundering (for the girls). These activities were not merely for instruction, but also provided an income for the homes, which thrived from the outset and expanded to take more children each year. The charity soon attracted the patronage of the Earl of Shaftesbury, by this time a significant philanthropist and campaigner for children's rights, who became its first president in 1881. Other important patrons were the Hornimans (a local family of tea merchants who established the Horniman Museum at Forest Hill; children from the Homes visited the Museum as one of their 'treats'), Princess Louise, a daughter of Queen Victoria, who noticed the children on a visit to the 'Indian and Colonial Exhibition' in 1886 and Princess Adelaide. Increasing donations enabled the construction of purpose-built premises, something quite rare in institutions for the destitute which tended to make do with converted warehouses or houses: Shaftesbury House (for boys) opened in 1883, Louise House (for girls) in 1891, the foundation stones having been laid by their eponymous patrons. Shaftesbury House was demolished in 2000.

While the Forest Hill Industrial Homes did not differ from other similar institutions in purpose or activities, they were notable for their success in caring for and training destitute children. Most of the children were admitted to the Homes via Ragged Schools and mission centres in the Whitechapel area of East London, and were either orphans or their parents were unable to look after them. The suburban atmosphere of Forest Hill in the late C19 was considered important in restoring the children to health and annual reports of the charity record how quickly new entrants were losing 'their sickly London hue, and being transformed into rosy-cheeked children'; others note the girl's uncertainty at 'what the green stuff [grass] was'. The Forest Hill Homes were part of Reformatory and Refuge Union, whose officers held them in high regard: 'if they have a specially bad case, [the RRU] ask us to see what we can do for the child, and now that they have a good opportunity of placing a boy in exceptionally fortunate circumstances, have given the nomination thus expecting to get the best children from us though asking us to take the most destitute', observed a committee member.

The Forest Hill Homes were smaller than many comparable institutions, having only 30 boys and 30 girls at its peak (the Boys Home at Regent's Park, for example, had 140 pupils in 1904; the LCC's Girls Industrial School at Isleworth housed 70 in 1900). They were also noted for their domestic atmosphere, which the Honorary Secretary of the Reformatory and Refuge Union described as 'homely', and where the children called the Matron 'Mother'. This special character may have been what attracted the notable Polish paediatrician Janusz Korczak to observe the homes in Forest Hill on a visit to London in 1911. Korczak returned to Warsaw to found a children's orphanage in 1912, and later became a significant theorist of children's rights before his death in the concentration camp at Treblinka alongside nearly 200 orphanage children during WWII. He was a signatory on the original Declaration of the Rights of the Child in 1923, which was adopted by the League of Nations in 1923 and by the United Nations in 1946. In a Polish journal published in 1912, he described his thoughts on seeing Louise House and Shaftesbury House and located his decision to devote his life to serving 'the child and his rights' instead of having children of his own to his return journey to London from Forest Hill.

Louise House was designed by Thomas W Aldwinckle, a local architect who served on the managing committee of the Forest Hill Industrial Homes and offered his services gratis. The builder was William Johnson. Aldwinckle also designed the public baths at Ladywell, Kentish Town and elsewhere, several of which are now listed buildings. Louise House stands in a group of late C19 buildings, including the Holy Trinity Schools (1874 and listed Grade II), Forest Hill Library (1901, Grade II) and Forest Hill Baths (1885, unlisted). All four are built on land granted to the Vicar of Lewisham in 1819, following the enclosure of Sydenham Common. This glebe land, popularly known as Vicar's Field, was let as allotments to those who had lost their right to graze animals on the common until the vicar made parts of the large field available for building social and charitable institutions. The vicar, the Hon and Revd Canon Legge, was one of the first donors to the building fund for the Louise House Girls' Home and a cousin of the Earl of Dartmouth, Viscount Lewisham MP, who was President of the Forest Hill Homes. Both men were also involved in the patronage of the Baths and other philanthropic projects in the area.

REASONS FOR DESIGNATION: Louise House is designated at Grade II for the following principal reasons:
* special historic interest as a rare survival of a purpose-built industrial school of the late C19;
* special architectural interest in the way this historic function is reflected in its design, through the lettering on the façade and in the use of the Domestic Revival style, which connects the building to the development of cottage homes by Dr Barnardo and stands in contrast to industrial homes that used a more institutional style;
* the Home was sponsored by a number of significant Victorian philanthropists and visited by the notable C20 Polish paediatrician Janusz Korczak;
* group value with the neighbouring Forest Hill Library and Holy Trinity Schools in this striking row of Victorian welfare buildings.

Louise House is designated for listing at Grade II for the following principal reasons:
* special historic interest as a rare survival of a purpose-built industrial school of the late C19;
* special architectural interest in the way this historic function is reflected in its design, through the lettering on the façade and in the use of the Domestic Revival style, which connects the building to the development of cottage homes by Dr Barnardo and stands in contrast to industrial homes that used a more institutional style;
* the Home was sponsored by a number of significant Victorian philanthropists and visited by the notable C20 Polish paediatrician Janusz Korczak;
* group value with the neighbouring Forest Hill Library and Holy Trinity Schools in this striking row of Victorian welfare buildings.