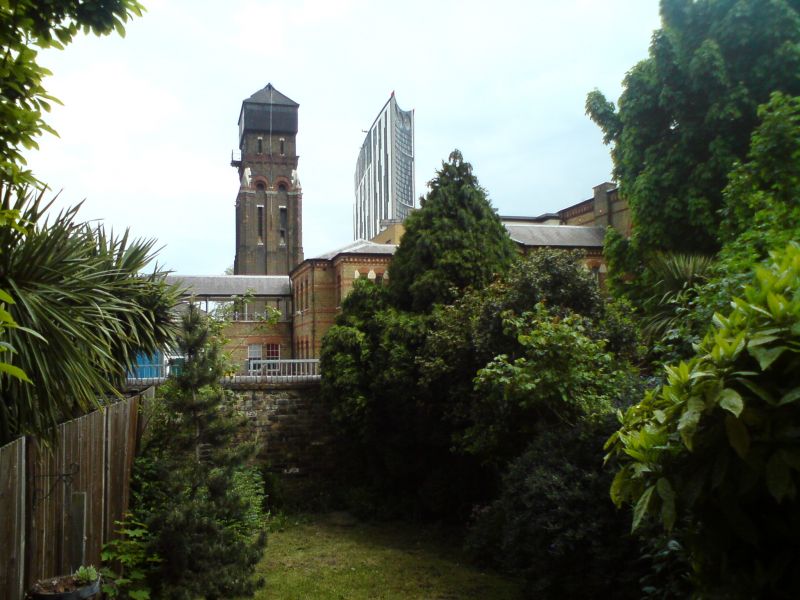 II
Water tower. Built 1877 to the design of Fowler and Hill, as part of Lambeth Workhouse and Infirmary, latterly Lambeth Hospital.

HISTORY: The provision of separate workhouse infirmaries was a key requirement of the Metropolitan Poor Act (1867) following the outcry at workhouse conditions in the mid 1860s, which prompted the rebuilding of several London workhouses, and a proliferation of new workhouse infirmaries. Lambeth Workhouse was rebuilt 1871-3 in Renfrew Road to the design of R Parris and TW Aldwinckle, housing 820 inmates. The new pavilion-plan infirmary was built on the adjacent site to the north west of the workhouse, and completed in 1877. Casual wards were added in 1877 at the south of the infirmary, and a water tower at the north-east of the former workhouse administration block. The water tower served both workhouse and infirmary. The remainder of the infirmary buildings, and most of the workhouse blocks, have been demolished.

Metropolitan workhouse infirmaries of this period were often architecturally very plain compared to other hospitals, but this water tower is imposing by most standards, probably a deliberate response to the particularly ornate Venetian Gothic style of the former workhouse administrative block.

REASON FOR DESIGNATION: The water tower of the former Lambeth Workhouse and Infirmary is designated for the following principal reasons:
* of special architectural interest as an imposing and distinctive water tower in the Venetian Gothic style, constituting a rare feature in inner London;
* historic associations with Lambeth Workhouse and Infirmary;
* group value with the former workhouse administrative block, whose style it complements, and with the nearby former courthouse and fire station in Renfrew Road (qv); a good ensemble of Victorian public buildings.