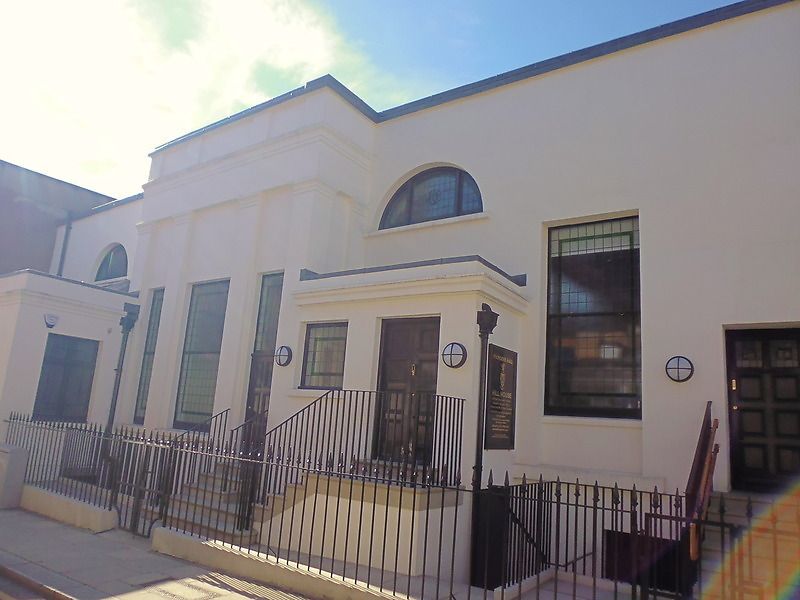 PLAN: A large single hall with small offices added to the south-east. A basement hall and kitchens reached by stairs accessed from the northern added entrance.

EXTERIOR: The C19 Radnor Walk elevation is asymmetrical, with later additions. An off-centre portico is in-filled between the piers, which are now pilasters, with sash windows with small rectangular leaded panes and green margin glazing, and a narrow doorway under a similarly glazed overlight. The entablature is set back and, according to the 1851 drawing, also in-filled. To left and right, is a plain blocking course. A pair of Diocletian windows, glazed similarly to the sashes, are set asymmetrically either side of the portico. To the left of the portico, a protruding single storey, flat-roofed bay of two builds, but with a continuous moulded cornice, has later C19 or early C20 sashes and casements to the front and return, and a pair of narrow panelled doors under a shallow overlight. To the right of the portico, an early C20 porch contains an entrance reached by steps with a pair of panelled doors and flanking fixed light with small rectangular lights and green margin glazing. To the right of the porch is a mid C19 sash with similar glazing, and a small inserted entrance. The rear wall of the hall has similar Diocletian windows and sashes.

INTERIOR: The hall fills the whole of the raised ground floor. Walls are lined in pilasters embellished with slender moulded panels, which support broad flat ribs of a coved ceiling. Two slender moulded panels are inset in the ceiling. End wall pilasters have paired brackets, and at the southern end shallow alcoves flank a centrepiece with moulded panels with rondels at the angles. The centre of the east wall is broken through behind the portico. A single panelled door leads from the left hand lobby, a pair of part-glazed doors with coloured leaded lights lead from the right hand lobby. Pine chapel fittings date from the 1880s. The hall is subdivided by a part-glazed timber screen of late C19 or early C20 date. The pulpit has carved blind panels to the front and is flanked by steps with balustrades with similar carved square newels with elaborate finials, and a moulded rail and square balusters. In front is a free-standing table with turned legs and chair with a pedimented back. The organ installed c1895, has a pierced cornice to the case, and is set into the south-west bay which has been pushed out over a basement passage. C20 stairs lead to the lower level which contains a hall and kitchens which have suspended ceilings. The hall has an inserted dais. Panelled doors, some with early C20 door furniture survive.

HISTORY: Radnor Walk was laid out in the 1840s. References to Commercial Hall appear in the late 1840s, as an entertainment hall or saloon attached to the Commercial public house on the corner of Radnor Walk and King's Road. As an entertainment hall, it was best known as a venue for up-market balls, concerts and public meetings and as an auction room. An advertisement of 1850 notes that it was considerably enlarged and beautified. A sketch drawing of c1851 shows the portico on the Radnor Walk elevation with the name over the entrance.

By 1871 the hall was being used as a Nonconformist place of worship. The Welsh community set up a church in Chelsea in 1859 and bought the building in Radnor Walk in 1879. The Welsh Congregational Church also acquired the lower hall and converted it into a church hall and kitchen c1910. In 1924 the upper hall was reordered and the pulpit was moved to the south wall. The church had a literary society whose debaters included Lloyd George, Tom Ellis and others.

The building is of interest for the history of the Welsh Congregational church in London, and of Nonconformism in Chelsea, which in the later C19 had a strong artisan population.

REASONS FOR DESIGNATION: The former Welsh Congregational Chapel, Radnor Walk, was built as a public meeting hall in the 1840s, and is designated at Grade II for the following principal reasons:
* Although altered, the elevation reflects the grandeur of these modest public halls, enlarged to meet a growing population, the interior of which survives as a rare example of the period;
* The building has special historic interest associated with its change of use to a Nonconformist chapel, of which the 1880s fittings survive.

The former Welsh Congregational Chapel, Radnor Walk, was built as a public meeting hall in the 1840s and is designated for the following principal reasons:

* Although altered, the elevation reflects the grandeur of these modest public halls, enlarged to meet a growing population, the interior of which survives as a rare example of the period;
* The building has special historic interest associated with its change of use to a Nonconformist chapel, of which the 1880s fittings survive.