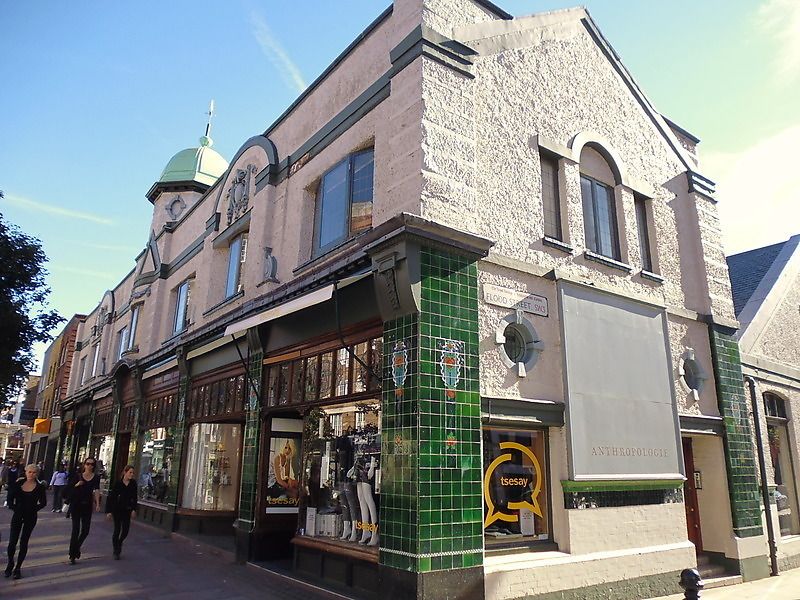 EXTERIOR: The seven-bay façade to King's Road is in the flamboyant, free Queen Anne-style typical of Edwardian billiard halls. Of two storeys, it is rendered in rough-cast with exposed banded brickwork and plenty of plasterwork and tile decoration. There are six shops and an entrance at ground floor level and alternate projecting bays above, these accentuated by oversized pediments, brick banding and flamboyant plasterwork in volutes, garlands and cartouches. The majority of the ground floor shop front joinery is sensitive modern replacement (the stall-risers on the two right-hand shops may be original) but the first floor fenestration - very shallow three-light bow windows recessed into the elevation - all survives as built. Rising behind the tall parapet is an octagonal central tower, with a domed cupola, modillion cornice and blind oeils de boeuf, above the former entrance bay which has a steep, almost equilateral, triangular pediment and plasterwork swags. The showy effect is completed with Art-Nouveau green tiles with a design of blue ribbons and oranges, which clad the pilasters, these with decorative consoles, that mark the bays between the shop fronts. The building's corner position is exploited by the continuation the theme on the return. There are further tiled pilasters, oeils de boeuf, banded brickwork, a shallow bow window and, in addition, Venetian windows to the two gable ends and a band of green tiles across both sections. The return to the east is plainer, although it also has green tiled bands, and the rear abuts the former Chelsea Garage.

INTERIOR: The interior of the billiard hall retains some original features. The hall was originally accessed through the narrow central bay on the Kings Road frontage but this is now a shop, although plasterwork on the ceiling survives. The arrangement of a hall accessed via a corridor from the street is preserved, however, the entrance having been moved one bay leftwards and now occupying a former shop. The shops contain no features of special interest, but do indicate the original plan form of the building. The hall runs parallel with the row of shops and, although it has been subdivided into retail units, retains its general appearance with a decorative metal truss roof, Art-Nouveau stained glass skylights, and stained glass in the bow and Venetian windows to the western end of the hall. The hall connects internally with the former Chelsea Garage next door, a modern arrangement.

HISTORY: T G Somerford was the second company architect to Temperance Billiard Halls Ltd. The firm was founded in Manchester in 1906 at the height of the temperance movement, perhaps in response to the success of the world convention on temperance held in London in the same year. Under its first architect, Norman Evans, the company built around seventeen billiard halls from 1906-1911.

The temperance movement aimed to combat alcoholism by building 'dry' recreational halls and hotels which rivalled the architecture of the opulent public houses of the late C19. The buildings often used the same decorative materials that pubs used, such as tiled facades and stained glass windows, to create the congenial atmosphere of a public house without the pitfalls of available alcohol. Temperance Billiard Halls Ltd initially targeted the suburbs of south London, where many new pubs had been built in the late C19, as well as north-west England where the firm originated. By the beginning of WWI, however, billiards halls had been built across London, by both Temperance Billiard Halls Ltd and Lucania Temperance Billiard Halls Ltd, the two principal firms in operation. By 1939 there were over 50 temperance billiard halls in London, though few are of comparable quality to the first tranche built before WWI. After WWII, billiards declined in popularity as did, at a much speedier pace, the temperance movement. Many halls were converted to snooker or bingo halls and public houses. The Kings Road hall, however, became an antiques market in the early 1960s just when the area was emerging as the hub of Swinging London.

REASONS FOR DESIGNATION:
* a well-preserved example of one of the architecturally impressive early temperance billiard halls, now quite rare nationally;
* special architectural interest for the eclectic detailing, characterful Queen Anne-style elevations and strong presence in the streetscape;
* abundant surviving decoration including patterned tiles, plasterwork and stained glass;
* one of the best halls designed by T G Somerford, architect to Temperance Billiards Halls Ltd;
* group value with the adjoining former Chelsea Garage of 1919 (q.v).

* special architectural interest of the former billiards hall for the eclectic detailing, characterful Queen Anne-style elevations and strong presence in the streetscape;
* abundant surviving decoration on the hall including patterned tiles, plasterwork and stained glass;
* a well-preserved example of one of the architecturally impressive early temperance billiard halls, now quite rare nationally;
* one of the best halls designed by T G Somerford, architect to Temperance Billiards Halls Ltd;
* the former motorcar garage is important as a surviving structure dating from the significant interwar period in the history of the motor car, when motoring transformed from leisure activity to widespread method of transportation;
* a notable exception to the practice of adapting older buildings, Chelsea Garage is a purpose-built structure of distinct architectural quality;
* the garage relates to attempts in the 1920s to encourage designs that were consciously vernacular or architecturally interesting,
* it is a quirky and characterful reminder of the use of traditional building forms, here a medieval hall house, to 'disguise' very modern building types in the interwar period.