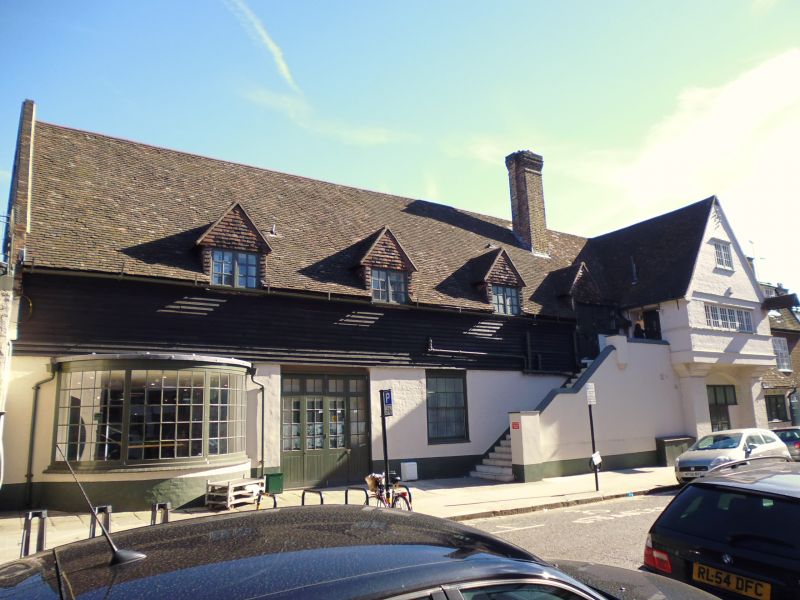 EXTERIOR: The former Chelsea Garage faces Flood Street and is a strikingly traditional composition for what would have been a very modern building type in 1919. The style is Domestic Revival and a cross-winged hall house appears to have been the inspiration for this consciously olde-worlde design. The main four bay range has a tall, steep-pitched tiled roof with dormer windows under pitched roofs with tile-hung gables and tall brick chimneys. The upper floor of the two storey brick elevation is weather-boarded, again a notably surprisingly vernacular feature for this otherwise metropolitan part of the capital city. The ground floor has been altered with the insertion of shop windows. A brick external stair runs parallel to the elevation along its right hand part, giving access to the upper floor. The stair also leads to the former chauffeur's quarters above the adjoining cross-wing with its gable to the street containing two horizontal rows of timber casement windows, six on the first floor and two in the gable attic. The jettying of the upper storey here adds to the vernacular effect, and even the projecting bracket, which formerly would have supported a trade sign, has a tiled cap. A final bay to the right of the cross-wing has a cat-slide roof and the original casement windows on the ground floor. The building abuts adjoining buildings to the left and right and the rear but the original plans show that a single-storey range, presumably the mechanics workshop, stretches back under a saw-tooth roof of three pitches. This appears to survive as built. The pavement to Flood Street is paved with square stone slabs which may have been laid when the garage was constructed in order to support the motor vehicles driving into the workshops.

INTERIOR: There is nothing inside the building which testifies to its historic use as a garage. The building connects internally with the former Temperance Billiard Hall next door, a modern arrangement.

HISTORY: The building was designed by Ernest G Cole of Bedford Row as a mechanics garage, for the taking in of cars for repair. A photograph of the garage appeared in The Autocar magazine on 8 May 1920, entitled 'Housing the Car in an Artistic Setting'. The original plans survive too, labelled Chelsea Garage, and reveal that the building had two vehicular entrances, in the centre of the main range and in the right-hand cross wing. Above the former were workshops and the latter a chauffeur's residence. The exterior of the building survives largely as built, aside from the insertion of shop windows into the ground floor.

In the Edwardian period, motoring was a leisure pursuit for groups of aristocratic enthusiasts, such as the first members of the Royal Automobile Club founded in 1897, and so filling stations and mechanics garages were not often commercially viable. Yet as vehicles improved in price and reliability, motor cars became commonplace in well-off households and great numbers of associated buildings were constructed including car showrooms, petrol filling stations, garages, and mechanics workshops as well as road bridges, roadside inns and pubs and car parks. The number of road vehicles in Great Britain rose from less than a quarter of a million in 1912, to under just one million in 1922, expanding to 2.4 million in 1934. These interwar years were the most significant in the proliferation of motoring and Chelsea, a well-to-do area, no doubt had more than its share of motorcar drivers. The early phase of motoring had bestowed on the area one of it most significant historic buildings: the Michelin Garage on Fulham Road (1909-11, Francois Espinasse, Grade II). During the interwar period, repair and maintenance garages like this one became much more common, though this is an atypical example in terms of architectural quality. Most were plain in design or adapted from existing buildings.

REASONS FOR DESIGNATION: The former Chelsea Garage is listed for the following principal reasons:
* considerable note as a surviving structure dating from the interwar period, when motoring transformed from leisure activity to widespread method of transportation;
* a notable exception to the practice of adapting older buildings, Chelsea Garage is a purpose-built structure of distinct architectural quality;
* the garage relates to attempts in the 1920s to encourage designs of car-related buildings that were consciously vernacular or architecturally interesting,
* a quirky and characterful reminder of the use of traditional building forms, here a medieval hall house, to 'disguise' very modern building types in the interwar period
* group value with the former Temperance Billiard Hall next door.

* the former motorcar garage is important as a surviving structure dating from the significant interwar period in the history of the motor car, when motoring transformed from leisure activity to widespread method of transportation;
* a notable exception to the practice of adapting older buildings, Chelsea Garage is a purpose-built structure of distinct architectural quality;
* the garage relates to attempts in the 1920s to encourage designs that were consciously vernacular or architecturally interesting,
* it is a quirky and characterful reminder of the use of traditional building forms, here a medieval hall house, to 'disguise' very modern building types in the interwar period.