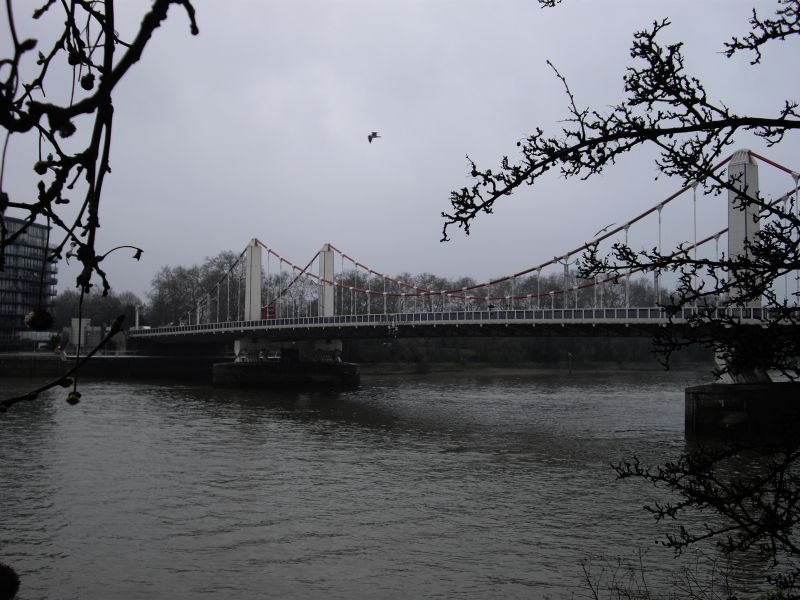 Suspension bridge, 1934-37, by London County Council Engineers under the leadership of Sir T Peirson Frank with Rendel, Tritton and Palmer as consultants; the contractors were Holloway Brothers and the consulting architect was George Topham Forrest of the LCC.

DESCRIPTION: Chelsea Bridge is a suspension bridge with a central span of 107.3m, side spans of 52.4m, giving a total length of 212.7m, and is 25m wide. The foundations for the piers, built in steel-sheet-piled cofferdams, were dug on the positions of the earlier bridge, but were of completely new construction, being formed of steel and concrete. The existing abutments were strengthened because of the weakness of the ground, a circumstance that led the engineers to design a self-anchoring type of suspension bridge. In this system the tensile stress generated by the cables is resisted more by stiffening girders than by abutment anchorages. The piers are clad in granite above the water line. The bridge has mild steel transverse beams, but uses high tensile steel in the wires of the suspension cables and in the flanges of the stiffening girders - one of the earliest such applications that predated the first British standard. The towers supporting the hexagonal-section suspension cables carrying the six-lane roadway are of steel box plate construction supported on rocker bearings. The deck is of high tensile steel box girder construction, an early use of the technique in the UK.

The bridge is painted mostly white with a red trim and greyish blue along the balustrades. It is embellished with five sets of lampposts, decorated with golden galleons, on either side of the bridge and smaller bulbs fixed into the swooping metal supports. There are heraldic designs on the four tall turrets at either end of the bridge: a golden galleon with two shields underneath (each marked with different symbols); crests of Middlesex and other counties around London; and a series of doves holding olive branches.

HISTORY: Chelsea Bridge took advantage of the latest analytical techniques developed by American and Continental engineers over the previous 40 years and represented a major step forward in British bridge building practice. The bridge was opened on 6 May 1937 by the Prime Minister of Canada, W L Mackenzie King, as the construction work had used Douglas fir from British Columbia in Canada. As in several public buildings of the 1930s the decision was made to use only materials from the UK or Commonwealth Countries (another example is Broadcasting House, the BBC's Headquarters in Langham Place, of 1931).

The first bridge on the site was authorised by an Act of Parliament in 1846 and built in 1851-8 to complement the new Battersea Park, laid out just before the bridge's construction. The suspension bridge, by architect Thomas Page, was described at the time 'as the most beautiful of the bridges that crossed the Thames'. Tolls were initially payable but this led to public complaints that the 'government gave a park to the people but placed a toll-bar at the gate to keep them out'. The tolls were removed in 1879, when the Metropolitan Board of Works acquired ownership of the structure. The bridge was never formally named and was known as 'the Victoria' after its official opening in March 1858 by the Prince Consort and the Prince of Wales. The change of name to Chelsea Bridge coincided with further strengthening in 1880, following an earlier episode of strengthening works in 1863-4. By the 1920s its replacement was being seriously considered, but the financial crises of the period delayed action until 1935, when the bridge was demolished following the Royal Commission on Cross River Traffic recommendations of 1926.

REASONS FOR DESIGNATION:
* Chelsea Bridge is architecturally impressive: its slender suspension towers create an elegant profile which echoes that of Albert Bridge upstream; the embellishment is similarly unpretentious, and the lampposts are of particular note.
* The bridge is of constructional interest as a self-stabilising suspension bridge, an unusual type, which represented a major step forward in British bridge practice building on the work of American and Continental engineers.
* Its extensive use of high tensile steel, predating the first British standard, gives it added technological importance.
* Chelsea Bridge also has significant group value as a component in an ensemble of C19 architecture including Albert Bridge of 1873 (listed Grade II*), Battersea Park of 1846 (registered Grade II*) and Chelsea Hospital Garden of 1687, remodelled comprehensively in 1849, (registered Grade II) to the north.
* Replacing a suspension bridge of 1851, the new bridge did not deviate from the original form and it makes an equally significant contribution to the Victorian character of the immediate context.

The asset was previously listed twice also under the London Borough of Wandsworth at List entry 1393010. This entry was removed from the List on 23 March 2018.