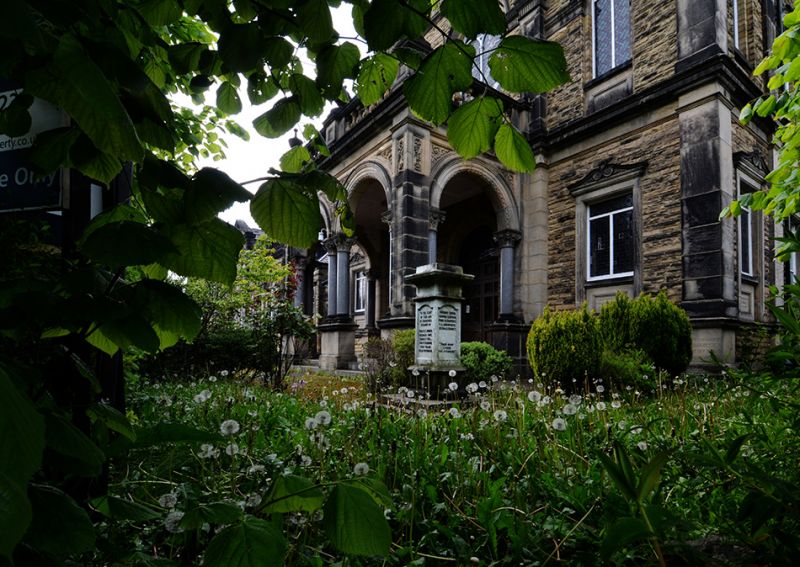 MATERIALS
Rusticated sandstone with ashlar dressings. Extensive relief decoration, mainly foliage. Stained glass windows to the entrance front and the first bays to the sides, as well as all fanlights. Welsh slate roof.

PLAN
Traditional auditory plan form with U shaped gallery facing an organ recess, ancillary rooms to rear extending to the rear of the attached Sunday school to the west. The church's twin entrance doors are protected by a large portico and open onto an entrance lobby one bay deep, flanked by stairs to the gallery.

EXTERIOR
The main entrance front (south) is two storeys by four bays The central two bays are raised, flanked by ornamented pilasters and topped by a pediment with a moulded finial at the peak. The gabled roof is cut back with partial hips so that it is hidden by the parapets and pediment when viewed from Grove Road. The pediment has dentilated cornicing, encloses a decorative relief and is supported by paired consoles. Below, but above the parapets of the flanking bays, there is a frieze carrying the wording "WESLYAN 1896 CHAPEL". To either side, supporting the raised portion of the central two bays, are inverted scrolled brackets. The first-floor windows are round headed with projecting keystones, moulded extrados and imposts and Lombardic tracery. The paired entrances are round arched and have stained glass fanlights. The double doors are panelled, part glazed and probably later replacements.

The portico is stone ashlar, incorporating plain granite columns with Corinthian capitals supporting round arches. These arches are moulded, incorporating a band of foliage decoration, with further foliage relief panels to the spandrels. The floor of the portico is tiled, forming a relatively simple geometric pattern. The portico is topped by a stone balustrade surmounted by three urns.

The flanking side bays are symmetrical. Each has a single first floor window which is similarly detailed to the central windows except for being smaller with simpler tracery in the form of a T. The corner of the building is marked by a pilaster with an ornate capital supporting a partial frieze to a dentilated corniced parapet. There is a corniced band at the level of the first floor window imposts with a further, broader storey band below which is also corniced. The ground floor windows are architraved and have scrolled pediments. Below each is an inscribed foundation stone.

The end bays of the front elevation wrap round to each side elevation. The remaining five bays of the side elevations are simpler with reduced banding and cornicing rather than pediments to the ground floor windows. Beyond the main body of the church there is a single storey bay in stone with a side entrance and window, with the full height section set back from Chatsworth Place in utilitarian brick. The upper part of the left elevation is identical to that of the right; the lower part is obscured by the Sunday school and is faced in white glazed brick to reflect light into the main school room.

The main body of the church retains its furnishings (see below). The gallery front is pine, being panelled with carved decoration and supported by cast iron pillars with some relatively modest ornamentation. The arch to the organ recess is richly decorated with plasterwork. The choir gallery, forward of the organ recess, has a pine balcony front matching the main balcony, but is topped by ornate brass latticework. The plasterwork of the ceiling has been lost, replaced by a modern suspended ceiling that is not of special interest. The rear of the gallery is separated off by an inserted stud partition that is also not of special interest. The windows of the main entrance front and to the sides of the southernmost bay as well as the fanlights to the main doors are all fully glazed with stained glass. This stained glass is abstract and mainly geometric rather than pictorial. Similar stained glass is used in the fan lights of the church's side windows lighting the gallery.

The interiors of the ancillary rooms are more simply detailed, retaining original joinery.

FURNISHINGS
The church retains the central rostrum/pulpit, and the communion rail, all of which is of elaborately decorated walnut incorporating brass latticework. These features may be later additions, but add to the special interest of the church. It also retains simple pine pews to both ground floor and most of the gallery. The organ is also still in situ although it is not known if this specific organ is of any particular special interest.

SUBSIDIARY ITEMS
Sunday School: The front (south) elevation of the Sunday school is of five bays. The centre three bays being tall with full height round arched windows, the side bays being narrower with architraved and corniced windows. All the windows are divided with slim glazing bars, with the upper lights holding coloured glass. The central three bays are surmounted by a raised pediment which is flanked and topped by large finials. The pediment contains relief decoration and the panel below is bracketed and carries a cartouche reading "SUNDAY SCHOOL". The entrance to the Sunday school is via an enclosed porch between it and the church to the right. This has a pedimented doorcase. The interior of the Sunday school is simply detailed and has later stud partitions and a suspended ceiling which are not of special interest.

Boundary wall: Low boundary wall with pillars to the front. Iron railings are later replacements (not of special interest) although the ornate front and side gates may be original.

HISTORY
The Methodist Church was built in 1896 as a Wesleyan Methodist chapel on a green-field site to serve the suburbs on the north side of Harrogate that were developing in the late Victorian period. Designed to seat up to one thousand people, the building cost £5,675. The 1909 Ordnance Survey map shows an attached Sunday school to the west. In 1929 this Sunday school was rebuilt on a slightly larger scale.

REASONS FOR DESIGNATION:
Grove Road Methodist Church is designated at grade II, for the following principal reasons:
* For its bold Italianate design and high quality, lavish architectural embellishments
* As a good example of a late 19th century Wesleyan Methodist show chapel complete with its gallery, stained glass and furnishings

Grove Road Methodist Church is designated at grade II, for the following principal reasons:
* For its bold Italianate design and high quality, lavish architectural embellishments
* As a good example of a late 19th century Wesleyan Methodist show chapel complete with its gallery, stained glass and furnishings