The Pantheon (Marks and Spencers) 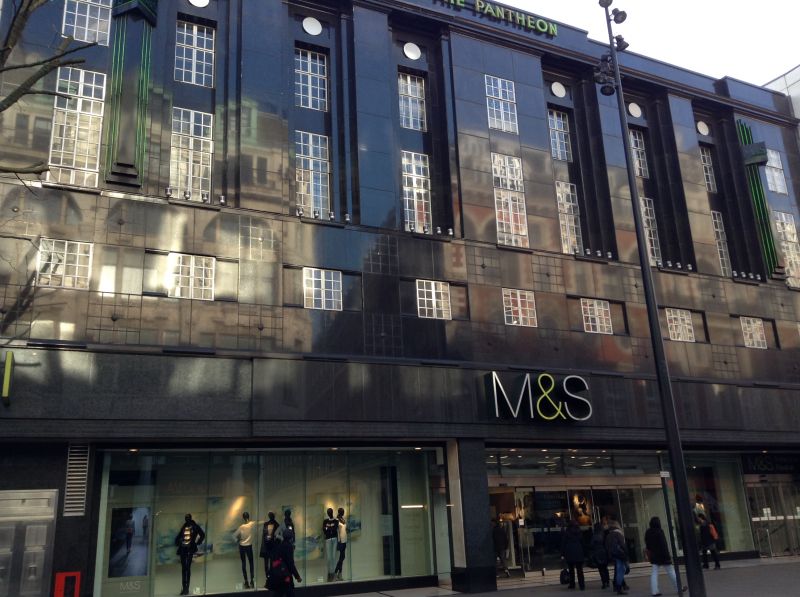 Shop, 1938 and early 1950s, by Robert Lutyens and W. A. Lewis and Partners. The special interest is concentrated on the frontage to Oxford Street only and there is little historic fabric inside the building.

EXTERIOR: The stripped classical façade to Oxford Street has four storeys and nine window bays, the five to the right dating from 1938 and the four to the left from 1951. The ground floor and fascia are modern, the original island display cases long-removed, but there is some surviving white marble cladding to the ground floor opening and the upper storeys are all original. The sleek polished granite surfaces of the upper storeys are varied through the use of different-sized facing slabs at second floor level; these chequerwork panels contribute to the geometrical effect created by the modular cladding system. Above this, six of the nine bays have deep window embrasures two storeys high with simple paterae above the original metal casement windows. A cornice and parapet above, the latter slightly raised and projecting above the central and end bay sections, conclude the principal elevation. This façade is the principal surviving part of the original fabric. The elevation to Great Marlborough Street is of limited architectural quality and dates from the 1970s; that to Poland Street has been rebuilt above ground floor level.

The Pantheon stands opposite two other notable shop buildings: the Wrenaissance-style former Waring and Gillow's of 1905-6 by Frank Atkinson and Richard Norman Shaw (Grade II) and the dramatic Mannerist-style former Mappin and Webb building of 1906-8 by Belcher and Joass (Grade II*), the latter also of interest for its pioneering exploitation of steel-frame to allow large display windows. Together, these three buildings form a strong group which showcases the ingenuity of commercial architecture in the Edwardian and interwar periods.

INTERIOR: At ground, first and second floor level behind the façade the building has been remodelled several times over and is now many times its original size and a further two storeys higher. It lacks special interest. There is a staircase dating to the 1950s in the Oxford Street facing section of the building but all other fabric is of recent date and there are no historic features such as display cabinets, counters, the café, or food hall.

Lutyens used a standardised design for Marks and Spencer stores: stripped classical facades were governed by a grid system of artificial stone slabs (in 10" square modules) and Crittall windows. This modular system could be applied to any frontage width and allowed for extensions at a later date; existing shops could also be refaced. This is well-illustrated at the Pantheon where expansion of the five bay wide 1930s shop to nine bays in the early 1950s is untraceable in the façade. The symmetrical elevation desired by Marks and Spencers' Board of Directors was preserved through the repetition of the core elements of the original across the extended façade; the geometry of the original design lent itself to this adaptation very readily. The original neon green signage was also re-centred at this time. Whilst other chain stores such as Woolworths and Montagu Burtons had in-house architects and were developing a house style for their branches in this period, Lutyens devised a generic design for new shops which also allowed the adaptation or extension of existing branches without diluting the house style. Whereas each plot developed by Woolworths or Burtons required a bespoke design, Lutyens' formula could simply be sent to the job-architects who would apply it to a particular site. At least forty stores were built using this method between 1934 and the early 1950s.

The Pantheon was the only branch aside from Leeds where artificial stone was abandoned in favour of highly-polished black 'ebony' granite slabs, a reflection of the prominence of these two branches. The shop front had a parade of island display and the interior was richly appointed with walnut counters and wall panelling, teak doors, oak block floors and coffered ceilings; this was unusually lavish as befitted the status of the branch, and all of it has now gone. The café, modelled on the American eatery Wanamaker's luncheonette in Philadelphia, had three curved bars and black and primrose Vitrolite walls. The retail space stretched back as far as to allow entrances on Great Marlborough Street and Poland Street, but was limited to the ground floor. On the upper floors (only the section facing Oxford Street rose to four storeys), were facilities for staff, including cloakroom, dining room, restroom and kitchen. The block to Great Marlborough Street was rebuilt in 1970-2 by Lewis and Hickey; the shop may have also been extended at this time, or later, and the overwhelming majority of the fabric behind the Oxford Street section is modern.

The shop's construction in 1938 necessitated the demolition of the Georgian Pantheon, of 1769-72 by James Wyatt. This domed building burnt down in 1792, was rebuilt and then remodelled several times over. It served as an assembly house, opera house, theatre, bazaar and wine warehouse. By the 1930s, only the façade to Wyatt's original building survived. In 1937 the Georgian Group attempted unsuccessfully to preserve the façade for re-erection elsewhere, with Marks and Spencer offering to contribute to the cost. Although a design for a country house behind the relocated Pantheon façade was commissioned, the project did not materialise and the stones have since been scrapped.

Established in Leeds in the 1880s by Michael Marks (and in 1894 forming a partnership with Tom Spencer), the M&S began as a 'penny bazaar' shop. By the 1920s, the firm was highly profitable and in 1926 public flotation raised sufficient capital for an ambitious programme of investment in new department stores and expansion of the existing stock: 'we are developing a new type of store, and incorporating architectural features which will make them a landmark in their respective towns. We believe that a beautiful building is a constant advertisement, which must result in increased trading', reasoned the company chairman. Between 1926 and the outbreak of WWII, 218 new or rebuilt shops were opened and an equal number of existing premises had been extended. The company's other London shop was at Marble Arch. This was, and still is, their flagship London store and designed as a one-off (i.e. not according to Lutyens' modular system) by Trehearne and Norman and opening in 1932. The Pantheon, on the other hand, was the most lavish of their regular stores and the culmination of the business' expansion in the 20s and 30s.

REASONS FOR DESIGNATION: The Pantheon is listed at Grade II for the following principal reasons:
* the façade is built according to a modular system devised by Robert Lutyens which was unique and innovative, its cleverness well-illustrated by the seamless post-war extension to the east, which is an integral part of the special interest;
* the use of black 'ebony' granite rather than artificial stone distinguishes this shop from other department stores of the period;
* this is a prominent historic branch of a celebrated national chain, built in the period of its expansion when much of the character of the high street as we know it today was formed;
* it has group value with the former Mappin and Webb store (Grade II*) and the former Waring and Gillow's (Grade II) opposite.