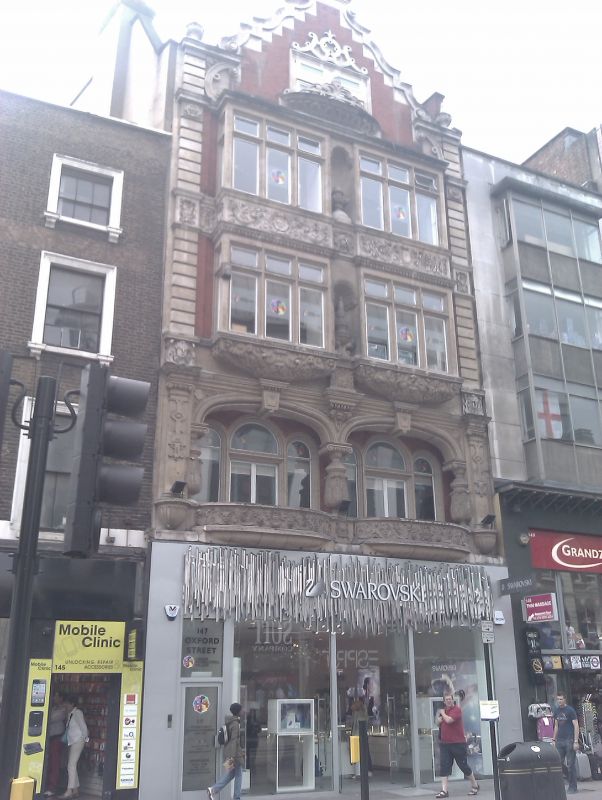 II
Shop with offices above. Built 1897 to the design of Gordon, Lowther and Gunton. Late C20 shop front.

PLAN: 4 storeys plus basement and gable attic. Ground floor shop with separate entrance to upper floors on left hand side. Rear stair. Pair of rooms to front and one to the rear, somewhat altered by removal of partitions or subdivision.

EXTERIOR: Portland stone and gauged red brick façade, remainder in stock brick. 2 bays wide. Opulent façade in eclectic neo-Jacobean/Flemish Renaissance style with lavish relief carving incorporating strapwork, masks, scrolls, foliage etc. Ground floor shop front modern, but it is possible that the original black granite surround survives beneath modern cladding. First floor is framed with tapering strapwork pilasters and has a pair of tripartite round-arched French windows recessed behind elliptical drop-keyed arches carried on bulbous foliated piers. Each has an elliptical balconette. Second and third floors are quoined and have paired oriels with elaborate corbels beneath. Oriels separated by a central niche; that to second floor shell-headed carrying a conical-headed vase on a scrolled console; that to the third an urn. Mullioned and transomed windows. Carved frieze between second and third floors. Above is an elaborate scrolled Flemish gable surmounted by a miniature broken pediment and finial. Gable has central window with strapwork crest and curved balconette with scrolled openwork balustrade. Metal-framed windows; glazing replaced. Timber sashes to rear.

INTERIOR: Shop premises much altered and has no visible features of interest. Cantilevered stair has cast-iron balustrade with timber handrail terminating in scroll. Timber glazed lantern above. Upper floor rooms altered but retain some contemporary chimneypieces and plaster cornices.

HISTORY: No. 147 Oxford Street was built in 1897 for John Robbins, chemist. It occupied the site of two late Georgian terraced houses. From 1898-1903 it was occupied by the Wholesale Co-operative Wine Association; from 1904 Rashleigh, Phipps and Co retailers of electrical fittings and subsequently a whole range of retail uses.

REASON FOR DESIGNATION: No. 147 Oxford Street is designated for the following principal reasons:
* Of special architectural interest as a remarkably ornate late C19 small-scale commercial building in the neo-Jacobean/Flemish Renaissance style, with lavish carved stonework;
* While the principal interest lies in the front elevation, internal features including the stair contribute to its special interest.