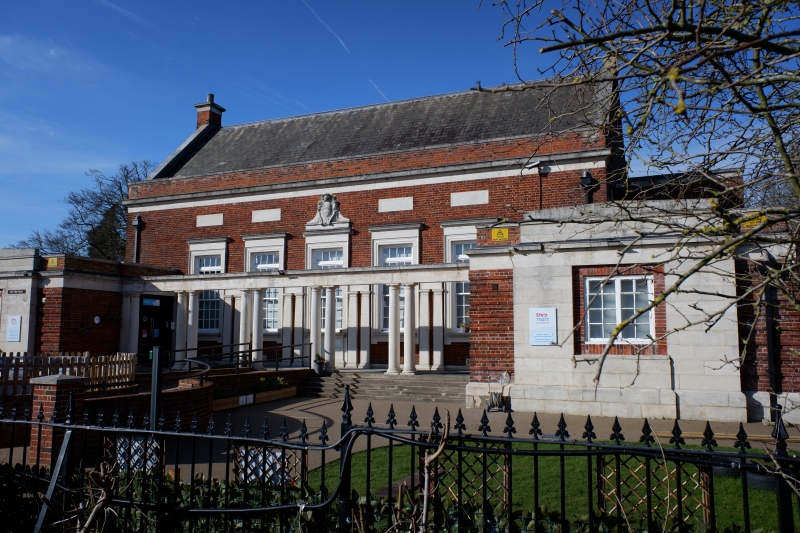 MATERIALS
The building is constructed of red and purple brick laid in English bond with stone dressings. It has a gable roof with slate covering and stone copings and brick parapets to the north and south elevations.

PLAN
Rectangular in plan with projecting wings at the east and west which wrap around the side elevations.

EXTERIOR
The south, modelled on an eighteenth century orangery, is the principal elevation and has single storey projecting wings to the west and east. The wings are of brick and stone with stone cornices and were originally used as separate entrances for boys and girls. They project to the south to create an open space paved with grey and white Sicilian marble, further defined by a colonnade of paired Doric columns supporting a plain entablature and approached by a flight of stone steps. Pairs of pilasters on the south wall of the main range echo those on the colonnade. The whole design is a carefully composed exercise in symmetry and classical restraint. In between the pilasters are twelve-over-twelve light, sliding sash windows with a top light of four glazes. The windows have stone surrounds and entablatures with the carved Essex coat of arms on a boss with lions head and foliate motifs over the central window. The north elevation has seven windows in the same form. The east elevation incorporates the stair tower, lit by a nine-over-nine arched sash window, which leads to the balcony above the gym area. Both the east and west elevations have semi-circular lights with radiating glazing bars at upper level and door and window openings at ground floor. The latter are blocked on the west elevation, which also supports an external chimney stack with stone dressings.

INTERIOR
The former changing rooms located in the east and west wings have been converted to office accommodation, waiting rooms and toilet facilities. A curving mezzanine roof has been inserted at the west end of the gym to create a more intimate space for wedding ceremonies. However, the sense of space remains tangible, emphasised by a vaulted and coffered ceiling along the length of the building with square and rectangular motifs, rising from projecting piers. At the east end is a gently curving balcony with panel motifs and plain timber hand rail. The space beneath the balcony has been partly enclosed and late C20 doors inserted at either side. Beyond this later work, however, the original two leaf timber panelled door remains and leads to the stairs which access the balcony above.

HISTORY
The County High School in Braintree was built in 1904-07 by Essex County Council on land donated by Mrs Sydney Courtauld of Bocking Place. In 1928-29 a single storey gymnasium was built at the Bocking End frontage to the north of the school, the two buildings separated by the tennis courts. It was designed by John Stuart the County Architect (who also designed Block C of County Hall, Chelmsford, listed at Grade II in 2007) and paid for by W J Courtauld. Elevational drawings kindly supplied with the application indicate that the building remains intact externally, apart from the blocking of a door and two windows on the ground floor of the west elevation. Following the closure of the school in 1992, the gymnasium was sympathetically converted into Braintree's Registrars' Office, opening in 1994. Some interior remodelling took place during the conversion, but these are considered reversible and the most significant features of the gymnasium interior remain.

REASONS FOR DESIGNATION
The former gymnasium of the County High School, now known as John Ray House, is designated for the following principal reasons.
* It has architectural quality in the design, elevational treatment and use of materials, and is a good example of interwar neo-Georgian school building, of an unusual type.
* It is a sophisticated example of the neo-Georgian style, emphasising good quality brickwork.
* It retains significant interior features, as well as an intact exterior.
* It was gifted by W.J Courtauld, a member of the nationally renowned Courtauld family who were important patrons of art and architecture in the C20.

The former gymnasium of the County High School, now known as John Ray House, is recommended for designation for the following principal reasons.
* It has architectural quality in the design, elevational treatment and use of materials, and is a good example of an inter-war Neo-Georgian school building, of an unusual type.
* It retains significant interior features, as well as an intact exterior.
* It was gifted by W.J Courtauld, a member of the nationally renowned Courtauld family who were important patrons of art and architecture in the C20.