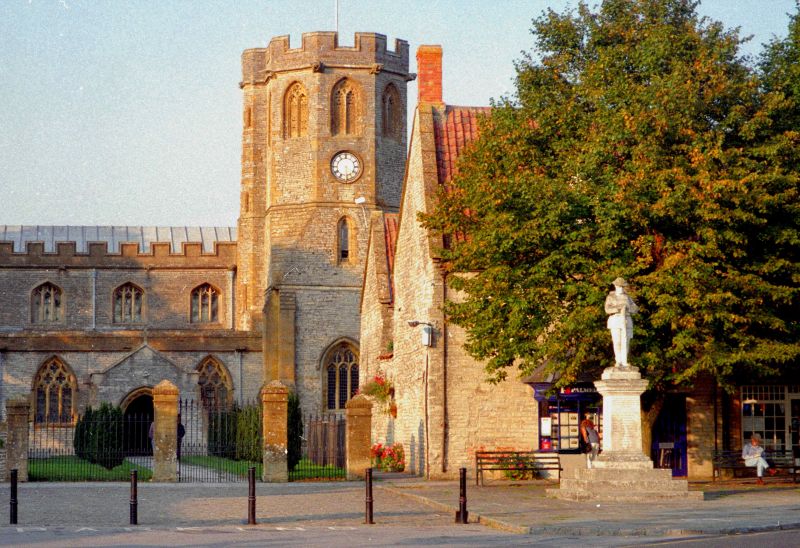 MATERIALS: Built of Portland stone.
PLAN: It has a square plan.
DESCRIPTION: The memorial consists a square three stepped base, upon which stands a square plinth surmounted by a Royal Artillery soldier standing in the reversed arms position, with stripes for long service and good conduct. The cornice of the front, southerly facade of the plinth has inscribed 'LEST WE FORGET' beneath which, on the plinth itself is 'IN GRATEFUL AND EVERLASTING / MEMORY OF THE SOMERTON MEN / WHO LAID DOWN THEIR LIVES FOR / THEIR KING AND COUNTRY IN THE / GREAT WAR / 1914 - 1919' and then the names of the officers and NCOs who lost their lives during World War I, with the names of ordinary soldiers and sailors on the east and west facades. The north facade shows the names of the soldiers who died during the Second World War, and those civilians who died during the 1942 German bombing of the Cow & Gate milk factory in nearby Etsome. The memorial stands in a prominent position in Market Place in the centre of the village, surrounded by listed buildings and within the Somerton conservation area.
HISTORY: The great age of memorial building was in the aftermath of the First World War, giving communities an opportunity to honour and mark their fallen. The Somerton memorial was dedicated on 21 May 1921.

RESONS FOR DESIGNATION DECISION
The Somerton War Memorial is designated at Grade II, for the following principal reasons:
* Historic: It is poignant record of the impact of tragic world events on the community and commemorates both servicemen and civilians lost in the conflict
* Architectural: Designed to specifications by the War Office, it is a handsome and well executed example
* Group value: It has strong visual group value with the surrounding listed buildings and scheduled monument.