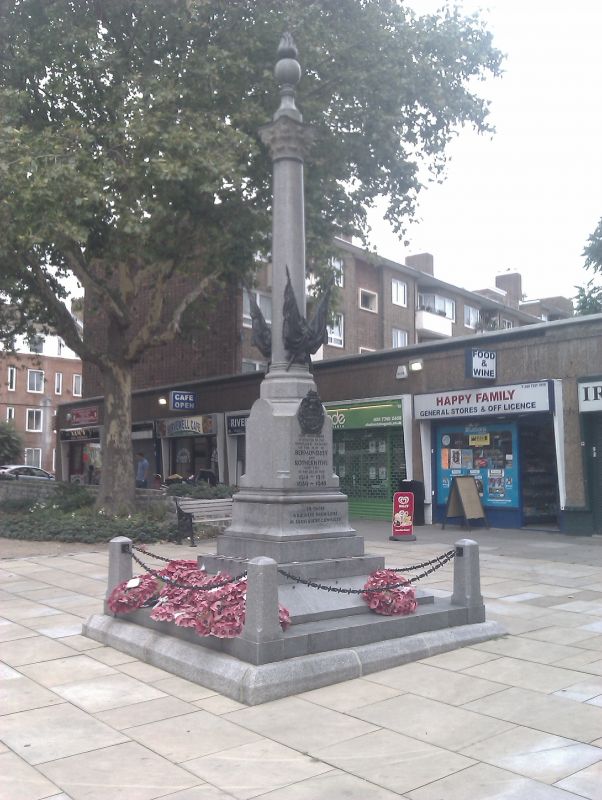 II
War memorial, unveiled in 1921, commemorating The Fallen of World War I, and subsequently added to following World War II.

DESCRIPTION: Built in granite, the memorial comprises a tall column with a Corinthian capital set on an octagonal base, with a ball and flame detail at the top. This in turn is set on a square base 2m in height, with arched faces which bear inscriptions in lead lettering. The south face reads: THIS MONUMENT / IS ERECTED TO THE / HONOURED MEMORY / OF THE MEN OF / BERMONDSEY / AND / ROTHERHITHE / WHO FELL / IN THE GREAT WAR / 1914-1918 / 1939-1945. Above is a bronze coat of arms of the former borough of Bermondsey and Rotherhithe. The north face bears the inscription: IN REMEMBRANCE OF / ALL THOSE CIVILIANS AND / MEMBERS OF THE CIVIL / DEFENCES AND FIRE BRIGADE / SERVICES WHO LOST THEIR / LIVES IN THIS COMMUNITY / 1939-1945. The east face bears the inscription: WHEN YOU GO HOME / TELL THEM OF US AND SAY / FOR YOUR TOMORROW / WE GAVE OUR TODAY. / AT THE GOING DOWN OF THE SUN, / AND IN THE MORNING / WE WILL REMEMBER THEM. At the base of the column are two pairs of bronze draped flags facing north and south. The whole column rests on a square plinth, stepped at the base, the south face of which bears the inscription: TO THOSE / WHO GAVE THEIR LIVES / IN SUBSEQUENT CONFLICTS.

The memorial is bounded by a granite post and chain fence and stands at the centre of a paved open seated area on the eastern side of West Road.

HISTORY: This war memorial was erected after World War I to honour the men of Bermondsey and Rotherhithe who served and died in the conflict. It was unveiled by the Bishop of Southwark in October 1921 and replaced a temporary memorial of 1920. The architect is unknown. Further inscriptions were subsequently added to the monument. These commemorate both civilians and members of the civil defences and fire brigade who lost their lives in World War II. A part of the inscription recalls the heavy price paid by ordinary Londoners in the London Blitz, which began in September 1940 and particularly affected this docklands area.

REASONS FOR DESIGNATION:
The war memorial on West Lane, Bermondsey, is listed at Grade II for the following principal reasons:
* Historic: a permanent tribute to the sacrifice made by the communities of Bermondsey and Rotherhithe during the two world wars. It commemorates not only the armed forces but also the civilian casualties of Bermondsey during World War II.
* Architectural: a handsome granite column of good design and construction.

This List entry has been amended to add the source for War Memorials Online. This source was not used in the compilation of this List entry but is added here as a guide for further reading, 17 February 2017.