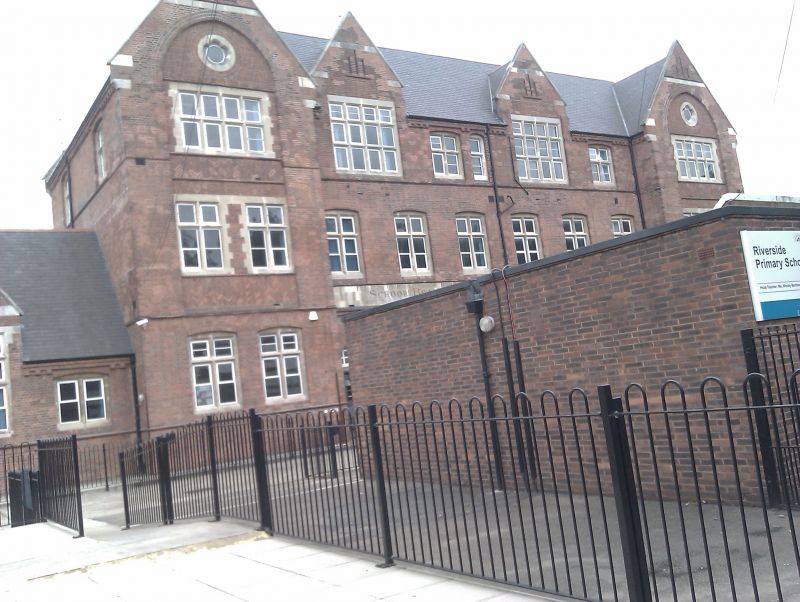 Formerly known as: Farncombe Street School Board School
FARNCOMBE STREET.
School Board school. Dated 1874. By MP Manning of Gale and
Manning. Brick in English bond with stone dressings; roofs of
slate.
STYLE: Gothic Revival style.
PLAN: 3 storeys over basement; 10-window range; single-storey
wing of 3-window range to the north and single-storey wing of
one-window range to the south. Shallow, U-shaped plan with
centre projection to the rear.
EXTERIOR: end bays of 2 windows each terminate in a
steeply-pitched gable; from the 1st floor to gable a
pointed-arch recess for the windows; tympanum pierced by
quatrefoil round. Pointed-arched loggia between projecting
bays on the ground floor, to either side a pointed-arch
entrance inscribed in Gothic script, that to the left marked
for "Infants and Girls". Flat-arched windows behind loggia.
Stone storey band above loggia inscribed: "School Board for
London Farncombe Street School 1874".
Pair of ground-floor windows to projecting wings are
segmental-arched with 2 lights. All windows with stone
mullions and transoms; flat-arched unless otherwise noted.
Pair of 1st-floor windows in end wings of 2 lights; 1st-floor
windows in intermediary ranges are 2-light and set in
segmental-arched recess. Storey band between 1st and 2nd
floors. Top storey with four 4-light windows, 2 in the
intermediary range finish in gabled dormers. All gables with
kneelers, stone coping and tripartite light slits.
South wing has 4-light window set in pointed-arched recess,
the tympanum of which pierced by cinquefoil round. Railings to
loggia and basement area. Rear elevation with gabled bays;
recessed one-window range bays, centre projection of 4-window
range. All windows in projecting block are segmental-arched
and 2 lighted to the halls. High hipped and gableted roof, on
ridge of hip a wooden cupola with metal cap; decorative
weather vane.
INTERIOR: not inspected.
HISTORICAL NOTE: Riverside School is an early and fine example
of the work commissioned by the London School Board from
architects in private practice. The ecclesiastical character

of this design was soon eclipsed in the workmanlike
compositions of the Board's architect ER Robson. Early Robson
designs in the Borough are the Southwark Park School,
Southwark Park Road (qv), the Flint Street Schools, Flint
Street (qv), and the Bellenden Road Schools, Bellenden Road
(qv), all designed before 1879.