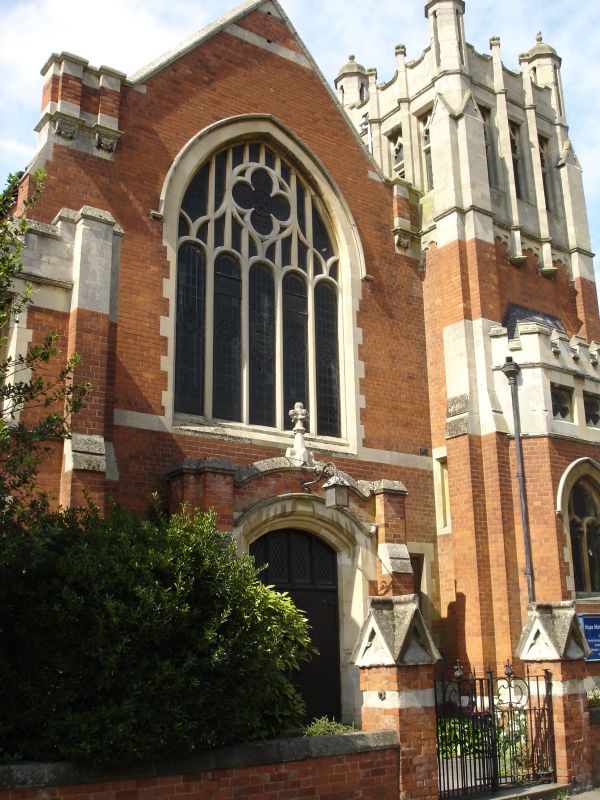 Church. 1904-5. By J. Jameson Green of Liverpool. Built by Robert Marriott of Rushden, glasswork by S. Evans of Smethwick. Church hall (original chapel) of 1890 and link vestibule of 1980's. Red brick with stone dressings and slate roof with coped gables. Elaborate Perpendicular style with buttresses, traceried windows and carved details. Corner site with ritual south to Latimer Street, NE tower, chancel hidden behind meeting rooms, nave, transepts, and east porch. A late C20 north-east vestibule provides a link to the church hall, original chapel, to south-east (on left of Park Road front.). This present church hall, of 1890, has a large 6-light window in Geometrical style over a projecting vestibule under a pentice roof. In the centre is the 1980's vestibule and to centre right a low staircase tower with parapet and pyramidal roof. The north-east end of the church has a 5-light window over a projecting porch which has angle buttresses and a basket-arched double doorway. The north-east tower projects to right and has a canted projection with pentice roof behind battlements. The side of the tower facing Griffith Street has a double door within Gothic arched doorway and windows above. The elaborate upper stage of the tower is stone-faced and has triple windows to all sides with a parapet above with corner domed turrets (a former wooden spirelet removed in 1986). The side of the nave has two tiers of arched 3-light windows and the transept projects forward with a 5-light window on both tiers. To right is an unusual element which projects and which is a group of meeting rooms in domestic style with entrance doorway and a 2-storeyed canted bay to right. There is thus a visual link with the housing in the street beyond.

INTERIOR. The church has a wide gallery on three sides supported on iron columns and there is a further gallery behind the pulpit which was remodelled as a 2nd World War memorial. There is an elaborate hammer-beam roof rising from curved braces with gables for the transepts and cusped panels between the beams and collars, above and to the sides being boarded. The entrance vestibule has many coloured-glass panels with elaborate leading in Art Nouveau style and the main windows also have coloured glass and patterned leading. An almost complete set of contemporary pews on both ground floor and in galleries. The staircases to the galleries have fine cast-iron balustrades.
The church hall has sides with arcades with more recent partitioning behind them and there is a suspended ceiling but the original curved braces to an open timber roof remain visible.
The ensemble of church, meeting rooms and church hall has a very successful and picturesque view from both streets with the prominent tower at the corner, and the church interior is little-altered with fine glass and fittings surviving under an impressive roof.

Church of 1904-5 by J. Jameson Green of Liverpool with church hall, originally the chapel of 1890. The Perpendicular style ensemble of church, meeting rooms and church hall has a very successful and picturesque view from two streets with the prominent tower at the corner, and the church interior is little-altered with fine glass and fittings surviving under an impressive roof.