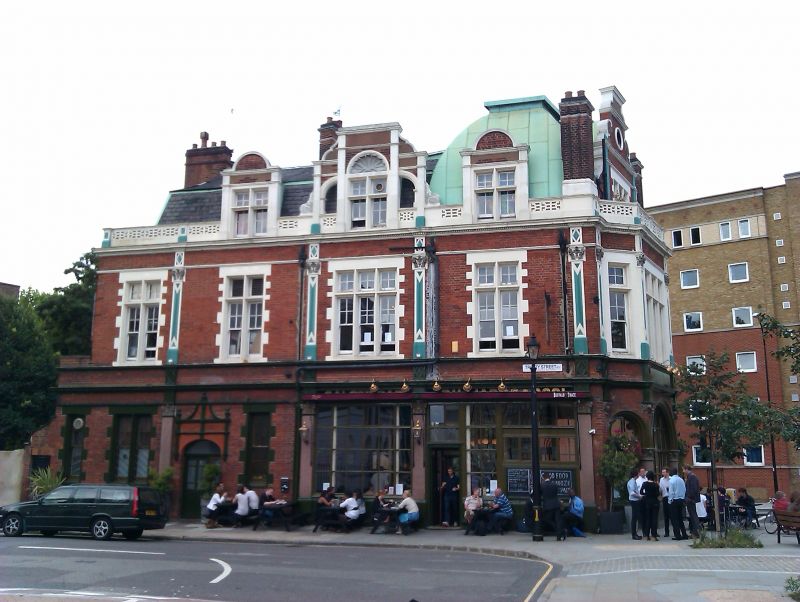 STYLE AND MATERIALS: Principally of red-brick with a slate mansard roof culminating in a green copper pavilion roof with curved sides to the south end. In an eclectic free style with Jacobean, Dutch and Classical features.

EXTERIOR: Of flat-iron plan, prominently situated on the corner of Great Dover Street and Trinity Street, the public house is of two storeys plus a tall and elaborate attic storey and cellar. There are three bays to Great Dover Street and four to Trinity Street. The flat-tip of the building is one bay wide with a two-storey canted bay window incorporating wide arched windows on pink granite columns at ground floor, and a shaped gable, behind a pierced strapwork parapet at attic level.

The ground-floor windows are full-height fixed multi-pane windows separated at each bay by pink granite pilasters. The windows to the first and second floors are horned sashes in heavy, painted stone mullion and transom frames with painted quoins to the second floor. The central dormer of each elevation is set within an aedicule with a scallop shell tympanum over the window; those to either side have semi-circular pediments, There is a low stone stall-riser to much of the building and a painted wooden fascia bearing the name of the pub and the brewery, supported by floral and animal motif carved brackets on the short south elevation. On the Trinity Street elevation a late C20 canopy has been fixed to the fascia. Geometrically-decorated stone pilasters with foliate capitals delineate the bays at first floor level.

Chimneys rival the dormers as prominent features of the roof line, with five overall, including two tall stacks situated on the outer sides of the south elevation, framing the pediment, and the pavilion roof behind.

INTERIOR: There is one open-plan public room to the ground floor, along with auxiliary rooms to the rear such as toilets. Cast-iron columns support the ceiling, where original partitions have been removed. The bar, in wood panelling, is 'U' shaped, and likely to be original. There is an original fireplace on the northern wall. An original staircase leads to a public function room on the first floor and auxiliary rooms such as kitchen and store room. The first-floor function room is panelled to dado-rail height, and retains its original fireplace and picture rail. The second floor was not inspected. The basement has been altered since the pub was built but still contains a number of glazed brick light-wells, now blocked at pavement level.

HISTORY: The Roebuck Public House was built in the late C19 and replaced a previous public house of the same name. It is unclear whether or not the building shown on the 1878 Ordnance Survey map is this one, or its predecessor.

REASONS FOR DESIGNATION:
The Roebuck, a public house of the late C19, is listed at Grade II for the following principal reasons:
* Architectural composition: a striking bull-nosed building, with a varied roofscape, taking advantage of the awkwardly-shaped but prominent corner site.
* Materials and detailing: busily composed of granite, stone, brick, timber and copper, with shell dressings to the dormer tympana and Jacobean-inspired details such as the strapwork balustrade and pilasters.
* External intactness: a well-preserved exterior with three public facades.