A Grade II Listed Building in Tutnall and Cobley, Worcestershire 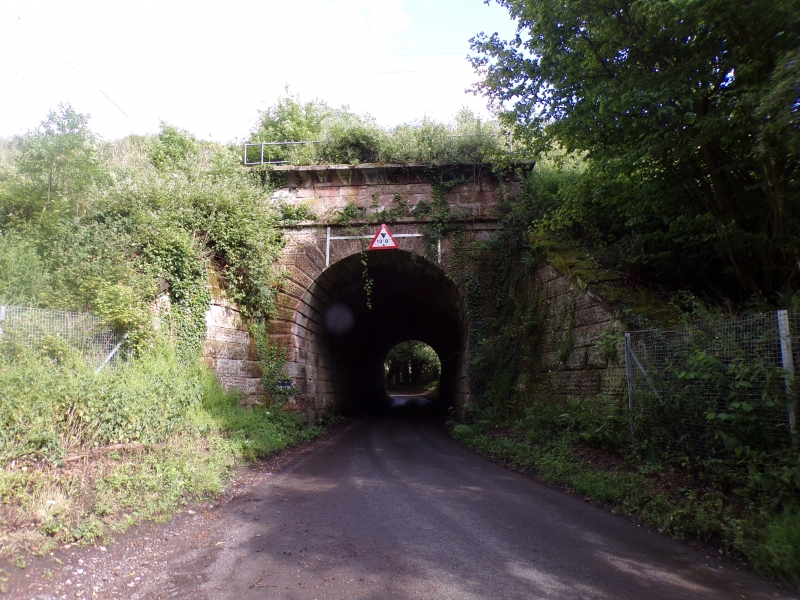 Entry Name: Blackwell Road Railway Under Bridge at NGR SO9884371537

A railway under bridge and wing walls, built c.1838-40 by the engineer Captain William Scarth Morsom, with assistance from Herbert Spencer, for the Birmingham and Gloucester Railway Company.

A railway under bridge and wing walls, built c.1838-40 by the engineer Captain William Scarth Morsom, with assistance from Herbert Spencer, for the Birmingham and Gloucester Railway Company.

DESCRIPTION: A single-span under bridge accommodating the Blackwell Road under the Lickey Incline. It consists of a single horseshoe arch of carefully built stonework, with picked-work voussoirs and keystones, rising from dressed springing stones. Above the arch is a string course, over which is a parapet wall with a projecting coved cornice topped by light steel safety railings. The intrados is composed of picked-work stone up to the springing line whilst, above the springing line, the tunnel portals are of ashlar with the central section being of red brick. There are opposing raking wing walls to the north-west and south-east, those to the north-west with terminal piers.

The Birmingham & Gloucester Railway was established by Act of Parliament in 1836 and opened throughout in 1840. It was engineered by Captain William Scarth Moorsom (1804-1863) who, after service in Nova Scotia as a military engineer and surveyor with the 52nd Light Infantry, bought his release from the army in 1832. In 1833 Moorsom was asked to survey a route for a proposed railway from Birmingham to Gloucester by Messers Sturge, corn merchants. As the railway directors were almost exclusively concerned with trade between the two cities, Moorsom was asked to survey the most direct route. However, the abrupt change of level occurring south-west of Birmingham, where the line would have to descend 300ft (91.4m) from the Lickey Hills to reach Bromsgrove, presented a major physical difficulty. Initial thoughts suggested that this could be avoided by a detour and both Isambard Kingdom Brunel and George Stephenson, when consulted, favoured this option. However, the directors of the railway company, striving for the cheapest possible option, accepted Moorsom's proposal of an inclined plane, rising upwards of 300 feet (91.4m) in little more than two miles (3.2km), or at the rate of 1 in 37.7 (2.65%). Construction work on the railway began in 1836 with work on the incline, later to be known as the Lickey Incline, starting in late 1838. Assisting Moorsom with the incline and its associated railway structures was the engineer Herbert Spencer (1820-1903) who, after resigning from railway service in 1846, was to become one of the great philosophers of the Victorian era. With some 240,000 cubic yards (183,493 cubic metres) of earth excavated, the steepest inclined plane then known in the world opened to through trains on 17 September 1840. As well as being unwavering in his chosen route, Moorsom was also adamant that the incline should be worked by locomotive engines throughout, rather than stationary engines. With no British manufacture able to supply him with locomotives, American 4-2-0 engines were imported from the Norris Locomotive Works, Philadelphia. However, the incline remained a serious hindrance to traffic until diesel traction supplanted steam.

Blackwell Road Under Bridge, built c.1838-40 by William Scarth Moorsom, with the assistance of Herbert Spencer, for the Birmingham & Gloucester Railway Company, is listed at Grade II for the following principal reasons:
* Historic interest: it dates from the construction of the Birmingham & Gloucester Railway in c.1838-40, the pioneering first phase of railway development.
* Engineering interest: as a structure associated with the Lickey Incline which, when opened in 1840, was the steepest inclined plane in the world, rising upwards of 300 feet (91.4m) in little more than two miles (3.2km), or at the rate of 1 in 37.7 (2.65%).
* Architectural interest: its use of picked-rock rustication gives it an interest over and above the more standardised and plainer designs that are usually associated with functional railway structures of this type.
* Intactness: the bridge has not been altered since its construction and is a good surviving example in a national context.
* Historical association: the bridge is constructed to a design by the engineer captain William Scarth Moorsom, with the assistance of Herbert Spencer, later to become one of the foremost philosophers, social theorist, and sociologists of the Victorian era.