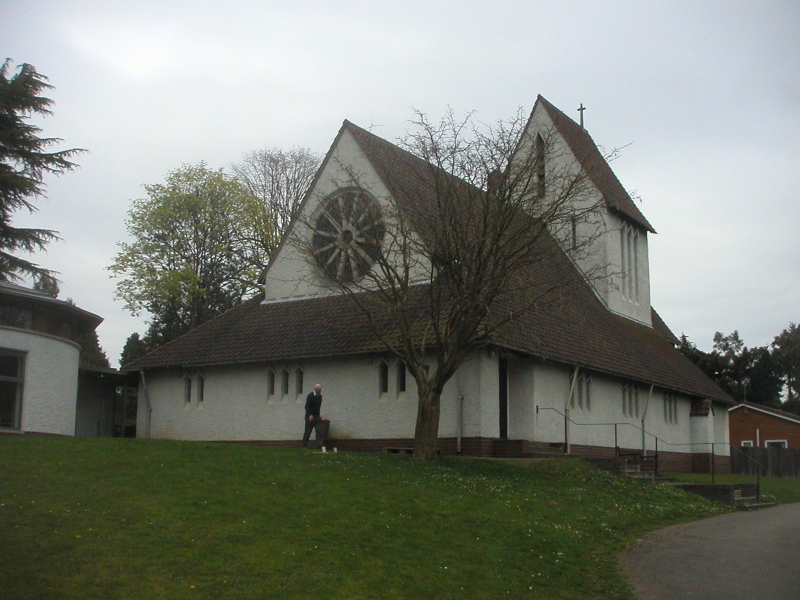 Anglican church. 1939-40; by Herbert Luck North. Whitewashed roughcast walls with exposed red brick plinth with course of blue bricks. Pantile gable-ended and hipped roofs.
PLAN: Nave, chancel, north and south aisles, west narthex, tower over the sanctuary and a vestry on the north side.
Scandinavian free Gothic style.
EXTERIOR: The large pantile roof is carried down over aisles and is continued over the narthex at the west end, which has a rose window in the gable above. A tower with a saddle-back roof over the east end with groups of tall thin lancets with hooded triangular heads and similar louvres in the gables of the tower. Groups of similar lancets to the aisles, narthex and chancel, the east window comprises a group of very tall lancets with an oculus above. On the north and south sides splayed entrances to the narthex, the south side has a buttress with tiled weathering and on the north side a vestry with a hipped roof.
INTERIOR: Whitewashed interior with brick arcades with rebated arrises rising from the piers into the high-pointed arches. The chancel arch and the arch to the narthex is similarly treated. Windows have deep splays and pointed rear-arches. Nave is open to scissor-braced common-rafter roof with two tapered chamfer fish-belly tie-beams, all painted white, except for decorated ceilures over the tie-beams and chancel ceiling. The aisles also have exposed rafter roofs. Original benches, pulpit and lectern. Piscina with canopy similar to that of windows and hexagonal font with chamfered corners. Buff-coloured tile floor and green-painted ledged doors.
SOURCE: Crawford, A., A Tour in North Worcestershire, Victorian Society, Birmingham Group, [1977].