Horsefield Table Tomb in Churchyard of Church of St Mary 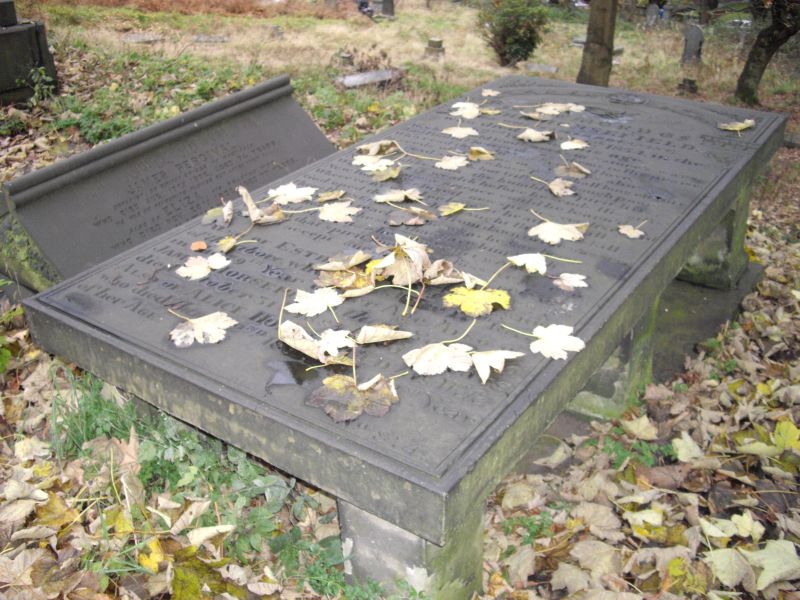 Table tomb of dressed sandstone. Decorative relief carving. Lain base with six short, square legs supporting a rectangular table with a moulded margin and carved surface design in the form of an elliptical arch supported by scrolled consoles with imposts incorporating an ivy-leaf motif. Arch band with a medallion to apex contains a dove descending bearing an olive branch. Naturalistic carving of vines to left of dove, oak leaves and acorns to right. Spandrels with carved foliation. An oval-shaped panel below the arch contains a carved relief of Horsefield's hybridised 'Trigridia conchiflora var. Watkinsoni'. Inscription reads 'IN MEMORY OF/ JOHN HORSEFIELD/ OF WHITEFIELD, BOTANIST/ who died March 6th 1854, in the/ 62nd Year of his age'. Below are 18 lines of verse by the poet Charles Swain (1807-74), which read 'Ye who behold God's works in Nature's ways/ And find in flowers mute anthems to His praise/ Who read the volume of eternal love/ In seeds of earth as in the stars above/ Here read a name whose fame shall long endure./ One of poor birth, but Gifted although poor:/ God - unlike man - the humblest spirit lifts/ Nor asks his wealth before He sends His gifts!/ Where'er Botanic science could be learn'd/ New links disclosed - new species yet discerned/ Where'er by wood or lane or heath or hill/ God op'ed the book that taught Botanic skill/ There HORSEFIELD's foot from dawn to eve was seen/ to learn - to teach - to be what he has been,/ An honour to the soil that gave him birth:/ Oh, may that spirit for whose loss we grieve/ Our God accept - our Saviour Lord receive. C. Swain. Further inscription to bottom of table reads 'Also of Esther Horsefield, widow of the above who died June 17th, 1872 in the 79th year of her Age (and James their son and Alice his wife)'.

John Horsefield (1792-1854) was a botanist and gingham weaver who was born into a poor family and worked tirelessly to educate himself. His passion for botany developed from an unillustrated edition of Culpeper's 'Herbal', which encouraged Horsefield to identify all the plants mentioned. As a working-class man himself, Horsefield strove to enable others to participate in botany, which was seen at the time as a gentleman's pursuit. Horsefield founded and presided over the Prestwich Botanical Society for over 30 years from 1820, holding meetings in local pubs and combining oral as well as text-based presentations in order to help illiterate people learn. He also encouraged working-men botanists to pool funds in order to buy books. Horsefield was the first person to discover the moss Entosthodon templetoni in England and also hybridised a new daffodil known as Narcissus 'Horsfieldii'. John Horsefield lived in severe poverty throughout his life; at the time of his death the only property he owned was 37 bulbs of Narcissus 'Horsfieldii'.

The Horsefield table tomb, c1854 in St Mary's churchyard, Prestwich, is designated at Grade II for the following principal reasons:

* Historic interest: it commemorates the regionally significant botanist, John Horsefield, a gingham weaver who strove to enable working-men to develop their knowledge of botany, which was seen at the time as the preserve of the gentleman
* Design interest: the table tomb incorporates richly detailed carvings that directly reference Horsefield's life, including a striking epitaph by the poet Charles Swain, and a depiction of a 'Trigridia conchiflora var. Watkinsoni', one of the flowers that Horsefield hybridised
* Group value: it has group value with the Grade I listed St Mary's Church and the other listed monuments and structures in the St Mary's churchyard