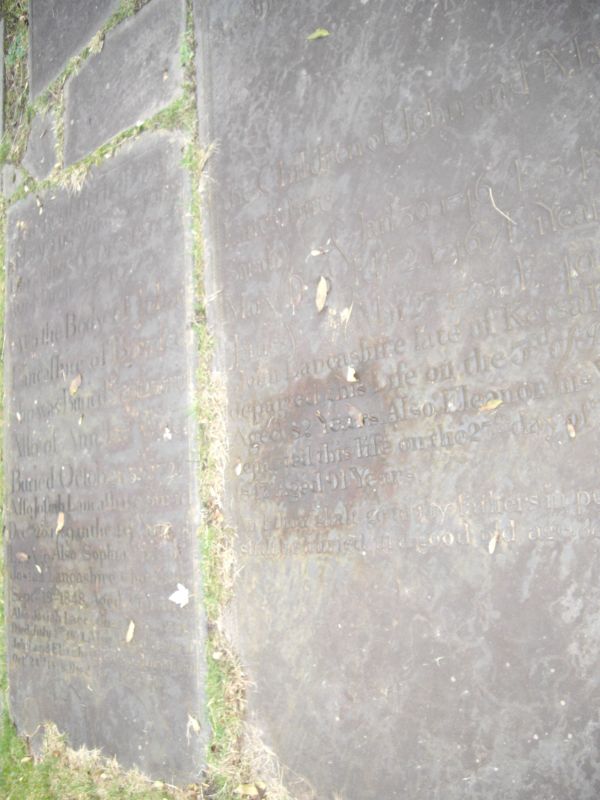 Sandstone, rectangular grave slab with incised carving including a border. Large scroll motif containing a diamond to the foot of the slab with the initials 'J.S.' above left (possibly referring to the stonemason). Inscription in widely-spaced lettering reads 'Here resteth the Body of/ Mary The Wife of John/ Lancashire of Prestwich/ Bur March 27th 1672'. Further inscription in similarly spaced but differently styled lettering reads 'Alfo the Body of John/ Lancafhire of Bowlee/ who was Buried Sept 23rd 1711/ Alfo of Ann his Wife/ Buried October 31st 1726'. Further C18 and C19 family names added below in smaller writing and standard lettering.

* Early date: It is an increasingly rare survival of a C17 grave slab with an original inscription that remains fully legible
* Historic interest: It illustrates the extensive history of the St Mary's churchyard and the original Prestwich-cum-Oldham parish, once one of the largest and wealthiest parishes in the country
* Group value: It has group value with the Grade I listed St Mary's Church and the other listed monuments and structures in the St Mary's churchyard