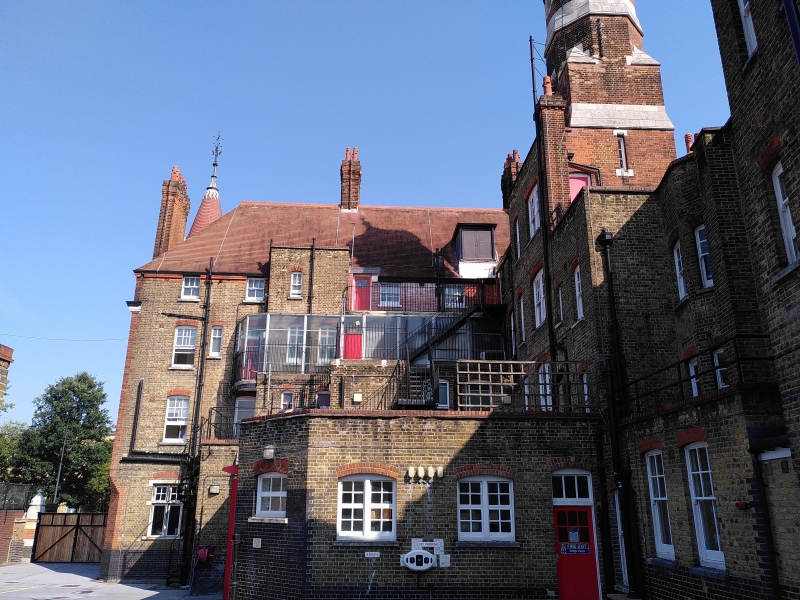 PLAN: the station is an L-shaped building, with a four-storey main block facing Queen’s Road and a three-storey range at right-angles to it on Waller Road. The main stairwell and the observation tower sit in the angle between the two. At ground level, the engine room occupies the central part of the main block, with the watch room to the west and the former recreation and mess rooms (now offices) to the east. The single-storey projection to the rear, now part of the engine room, was originally the stables, its flat roof probably used for drying clothes. The first floor initially contained the quarters of the foreman and superintendent; the present arrangement, with a central corridor giving access to the mess room, kitchen, WCs and sleeping cubicles for on-duty firemen, probably dates from the 1912 alterations. The second and third floors comprise a series of flats for the married officers, each originally containing a kitchen, a scullery and a single bedroom, with shared WCs and spare rooms opening from the rear corridor. The Waller Road range contained coachmen’s quarters and a dormitory for the unmarried officers on the ground floor, with corridor-access flats above and WCs in projecting blocks to the rear; the present arrangement, with two self-contained houses at the northern end of the range, dates from 1912.

EXTERIOR: the symmetrical Queen’s Road block is in a baronial or château style, its six unequal bays framed by big cylindrical corner tourelles, corbelled out at the base and topped by tall conical roofs, that to the right retaining its elaborate wrought-iron finial. Windows are timber sashes with stone cills, lintels, transoms and half-mullions. The two original appliance bays had segmental heads and were divided by stepped and gabled buttresses, one of which survives; the three present bays with their concrete piers and fascia - inscribed ‘LONDON COUNTY COUNCIL / NEW CROSS FIRE STATION’ - date from 1958 (although characteristic of the period, they do not contribute to the building's special interest). Lettering above the first-floor windows reads ‘LONDON COUNTY COUNCIL’. A heavy moulded cornice spans the full width of the façade at second-floor level; the third-floor windows above rise into gabled half-dormers. The main roof is hipped, with very tall and broad ridged stacks. The short return to Waller Road has a Gothic trefoil-headed plaque bearing the date 1894.

The Waller Road range is in two sections: the taller right-hand part has twin gables and ridged stacks, while the left-hand part, raised to its present height in 1912, has hipped half-dormers. The three ground-floor doorways also belong to the 1912 remodelling, when part of this range was converted into houses for the superintendent and foreman. In the angle between the two ranges rises the tall, slender observation tower. This is square at the base but becomes, through a series of angled off-sets, first octagonal and then cylindrical, with the observation chamber itself in a glazed timber cupola with miniature crenellations and a conical roof.

INTERIORS: these have been much altered, and it is difficult to distinguish original features from those which belong to the 1912 and later remodellings. The engine room is spanned by metal girders supported on moulded stanchion columns. The main stair has a simple metal balustrade with twisted uprights. The upper two floors, originally married officers' flats, have been least altered, retaining doors, cupboards, lobby screens, fireplaces and other fittings. The sliding pole, installed in 1912, is set in a glazed timber enclosure with double doors on each level.

SUBSIDIARY FEATURES: twin gate-piers with octagonal stone caps flank the entrance to the yard from Queens Road; the original gates have been replaced. The area in front of the Waller Road range (and around the corner in Queens Road) is marked by a run of spiked wrought-iron railings.

(In the yard to the south-west of the main building is the former long ladder shed, now used as a gym; this is contemporary with the main building but has been much altered and extended and is not of special interest. The same is true of the small brick outbuildings to the south and the modern drill tower.)

The fire station at New Cross was one of the first to be built by the London County Council (LCC) after it took over the responsibilities of the Metropolitan Board of Works (MBW) in 1889. Sketch plans were approved in July 1891, and detailed drawings followed in May of the next year. The foundation stone was laid in April 1893 and the work - carried out by direct labour from the LCC Works Department - was completed the following June at a total cost of £18,789. New Cross was the command centre of the Metropolitan Fire Brigade’s ‘D’ Division, and the station was built to accommodate the divisional superintendent, a station foreman, eight married and eight unmarried firemen, as well as two coachmen and stabling for four horses. The equipment comprised one steam-powered and one manual appliance as well as a hose cart and van, a long ladder (in its own shed in the station yard) and four fire escapes.

A major upgrade took place in July 1912, when the Waller Road range was remodelled and enlarged to form self-contained houses for the superintendent and foreman and flats for additional married officers. A sliding pole was installed to give quick access to the engine room, which was expanded to incorporate the now redundant stable block. In 1958 the two original appliance bays were increased to three, and the openings widened and remodelled.

London’s first purpose-built fire stations were built in the years after 1865, when the Metropolitan Fire Brigade, newly formed under the MBW, took over the operations of the earlier, privately-run London Fire Engine Establishment. The brigade's dynamic commander, Captain Eyre Massey Shaw, insisted that all officers should live on site, and the early stations were planned accordingly, with small flats for married firemen and dormitories for their unmarried colleagues. Observation towers, which usually doubled as hose drying chambers, were introduced after 1870. Robert Pearsall, the brigade's chief architect from 1879, remained in post after the MBW was merged into the LCC in 1889, and his distinctive baronial-style elevations remained the norm for London fire stations until the end of the century. Sliding poles, an American innovation, were introduced from 1902, and by 1914 motorised engines had replaced the earlier horse-drawn appliances.

New Cross Fire Station, built by the London County Council in 1893-4, is designated at Grade II for the following principal reasons:
* Architectural Interest: a particularly imposing and grandly-conceived fire station building with a romantic, château-like exterior;
* Historic Interest: an early LCC fire station and divisional headquarters which, despite various alterations, clearly reflects the operating requirements of London fire service in the late C19 and early C20.