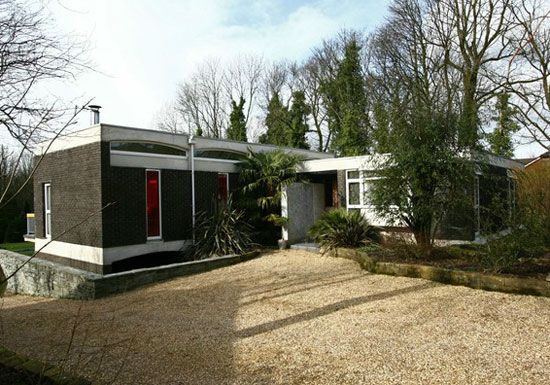 House. 1958 by Alan Chambers for Eric Cookson and his wife. Contemporary modern style.

PLAN: the house has a T-shaped plan built into the hillside to provide a ground floor over a smaller lower ground floor, with the main elevations facing over a large garden to the west. A rectangular block, containing an open plan living and dining room on the ground floor, runs north-south, with lower wings on either side at the north end . The kitchen, bedrooms and associated rooms, are also located on the ground floor. The lower ground floor is reached by a staircase from the entrance hallway. It has a large party room, a dark room, now a bedroom, and a large double garage.

EXTERIOR: the main elevation of the house is the two-level west front overlooking the garden. It comprises a flat-roofed block running north-south with a lower wing projecting to the left, a square, raised rectangular pool projecting to the right, and an original patio area in the middle. Strong horizontal lines are formed by the white rendered concrete floor and wall plates, with brown bricks used for the outer walls and the lower-ground floor walls and structural walls of the wing. The main block has slender square-section concrete columns supporting the floor plate and the shallow concrete vaults of the open-plan living space. The wing has an original motorised steel concertina door for a double garage on the lower ground floor. At its right-hand end is an original spiral staircase rising to a full-width concrete balcony with metal balustrading and a square-section timber handrail. Both the master bedroom and the kitchen have full-height picture windows with sliding panes opening onto the balcony. The main block has picture windows on both floors; the lower level has a sliding pane opening onto the patio, the upper level has a sliding pane opening onto a similarly detailed balcony the width of the right-hand bay, and shallow, segmental clerestorey windows. The balcony overhangs the raised, shallow pool, which has walls of grey, unshaped slate. The pool is fed by drainage water from the roof, which runs in a channel beneath the upper level of the house and cascades down three steps into the pool, before being pumped back up again. The patio has original hexagonal tiling. In front of the patio is a large circle formed of stone setts.

The drive approaches the house from the east, and from here it appears as a single-level building. A lower wing projects to the right. It contains the main entrance doorway set to the rear of an open internal porch in its south elevation. The side walls of the porch are faced in original marble panels, the projecting screen wall to the left-hand side of slate steps has crazy patterned stonework The original timber door has a single glass panel and side light with letter box. The entrance is flanked by shallow, curved stone walls forming flower beds. To the right of the doorway is a full-height glazed panel and a shallow, rectangular oriel window. The east elevation of the higher block has brick walls with two full-height narrow panes glazed with red glass in the manner of the original windows.

INTERIOR: the entrance door leads into a hall with bold terrazzo marble tiles. The right-hand and rear walls have panelling of vertical walnut planks incorporating full-height doors with aluminium handles, and an open tread wooden staircase leads down to the lower ground floor. The stair well is enclosed by a balustrade with square section timber rails of varying widths. The original light switches remain, together with an original art installation on a timber-clad pillar beside the stair well. The open plan living and dining room has a higher, shallow vaulted ceiling. It opens off the entrance hall and is partially screened by a freestanding screen wall. This is faced to the inner side by wide rosewood veneer panels and an open timberwork frame is supported between it and the opposing wall, lowering the ceiling height over the dining end of the room. A similarly veneered lighting canopy with a central hanging light fitting (with modern shade) is attached to the frame. The room has large, square, cream-coloured terrazzo tiles separated by narrow brass bands. On the west side of the building is the kitchen. It has white painted brick walls and modern fitted kitchen units: the original rubbish chute to a lower ground storage room still survives, but is no longer in use. The master bedroom is located adjacent to the kitchen. It has original fitted wardrobes and built-in dressing table with silky oak veneers and aluminium handles. The east wall is panelled and incorporates two full-height doors opening into an ensuite bathroom and a separate dressing room lit by a circular skylight. The ensuite has been refitted, though the metal towel loops are original. The dressing room retains its original fitted wardrobes and drawers. Opening off the entrance hall is a small room, originally a cloakroom, now a study, lit by a circular skylight, with a separate toilet beyond with original wc and sink. Adjacent to the entrance door, on the west side of the building, is a corner room, which was originally a secretary's room with a hatch into the adjacent room, now removed. The adjacent large bedroom originally had a concertina wall to divide it in two, now removed; the end adjacent to the secretary's room could have been used as an office. The room retains original fitted rosewood veneered wardrobes and built-in dressing table. A doorway opens into the bathroom, which has the original cast iron rebated bath, sink, wc and metal towel loops.

The steps down to the lower ground floor open into an L-shaped party room. It has the original acoustic tiles on the ceiling, a timber floor with an under-lit circular glass dance floor made of segmental sections, and original timber doors with aluminium handles to the rooms opening off. On the east wall is an original abstract light-box installation. In the north-west corner is an original bar with a rectangular bar counter of timber and green, textured tiles set on a plinth beneath a suspended timber-edged canopy, with a bar back of lit shelves for bottles and glasses, and three fixed aluminium and leather bar stools. On the west side of the party room an internal doorway opens into the garage. There is also a small cloakroom, with an external door opening onto the patio, and a separate wc both with painted brick walls and original fixtures and fittings. In the north-east corner of the house is a bedroom, which was originally a darkroom. The shutters have been removed, but the original cupboard doors remain.

Domus was built in 1958 for Eric Cookson and his wife. Cookson was managing director of Howarth Construction, a local firm who were responsible for the 1950s redevelopment of Burnley's shopping centre around St James Street, where the firm built fifteen two-storey shops and the Empress Hotel. Domus was designed by Alan Chambers and built by Howarth Construction. It was built in the grounds of a large house identified as Reedley Lodge on historic Ordnance Survey maps and now demolished. It has not been possible to locate original building regulation plans for Domus.

The Cooksons continued to live in the house until the beginning of the C21, and the present owners purchased it around nine years ago. Prior to that the house had lain empty for two years and had been damaged by damp. The new owners undertook a sympathetic renovation. The original window frames were teak and had rotted so were replaced throughout with uPVC frames to the same glazing patterns. The house was re-roofed, the terolean render replaced, and the balcony handrails replaced like-for-like. A projecting screen wall flanking the inset porch of the main entrance doorway was re-faced with crazy patterned stonework: some original large marble panels remain within the porch. Internally, the original under-floor heating was no longer working efficiently and so radiators were introduced throughout. The original wooden kitchen units and two stainless steel sinks were replaced with a modern fitted kitchen.

Domus, 542 Colne Road, Reedley Hallows is designated at Grade II for the following principal reasons:
* Architectural quality: as a good and increasingly rare example of a carefully designed small post-war modern house displaying design influences from both the United States and Scandinavia, and clearly reflecting the lifestyle of the owners for whom it was built;
* Planning interest: the house cleverly utilises the slope of the land with a low, single storey giving privacy from the road whilst opening out over two storeys to the main garden elevation onto which the principal rooms face, this aspect being exploited by the extensive use of large picture windows and balconies;
* Layout: the original layout survives virtually unaltered, with whole of the lower ground floor dedicated to socialising and hobbies with a party room opening onto the patio, a double garage, and a large darkroom (now used as a bedroom), whilst the spatial organisation of the main ground floor illustrates the post-war concept of open-plan living, and the contrast between shared (living area) and separate (bedroom) zones;
* Materials: a variety of quality materials are used throughout to provide contrasting forms and textures;
* Fixtures and fittings: many original and individually designed details surviving, the most spectacular of which are found in the party room with its circular under-lit glass dance floor, bar counter with fixed stools, original light-box installation and acoustic ceiling tiles. Elsewhere extensive use is made of wood for panelling, with full-height concealed doors, and for built-in furniture, whilst other features include a wooden open tread staircase, terrazzo floor tiles, original light switches, aluminium door handles, metal towel loops and many sanitary fittings, including the bath.