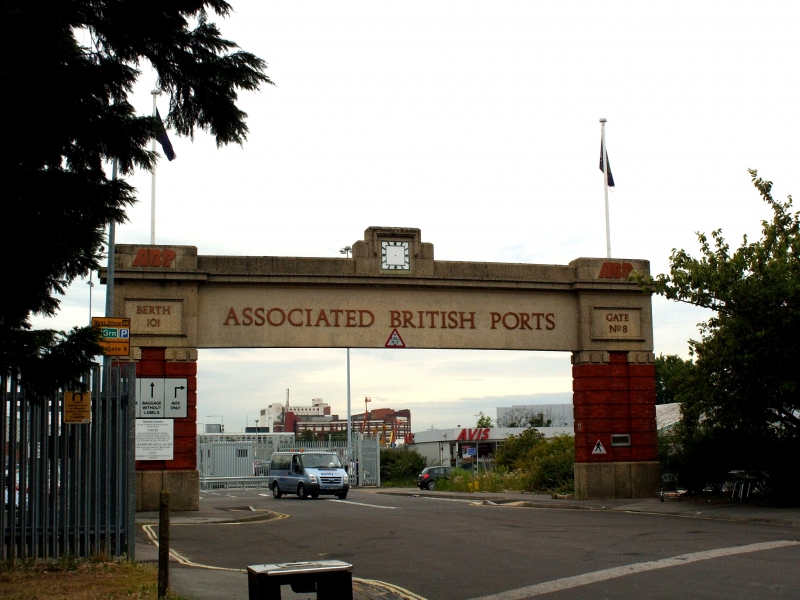 Monumental gateways to the Western Docks. 1933-4 by the Southern Railway Company.

The two gateways, built in a stripped classical manner with Moderne detail, are identical in design. Narrow in section, they have rectangular pre-cast concrete block plinths with exposed aggregate and with curved arrises. These support rusticated red brick piers in the form of pairs of pilasters, laid in English bond with recessed pointing. The piers support a broad, flat concrete beam in the form of an entablature with a projecting moulded cornice and are surmounted by stylised concrete capitals each with a framed concrete panel bearing the gate and berth number. In the centre of the entablature is a clock in a stepped surround with a square clock face below a hood moulding on each elevation. The clocks are no longer working. Each gateway is approximately 10m high and approximately 18.4m in width to the outside of the piers.

The signage on the front of the entablature originally read SOUTHERN RAILWAY/DOCKS in metal letters. On Dock Gate 8 this has been altered to ASSOCIATED BRITISH PORTS (some of the lettering is missing) whilst Dock Gate 10 bears the legend ASSOCIATED BRITISH PORTS/ PORT OF SOUTHAMPTON. The framed panels bear the berth and gate numbers respectively. In the case of Dock Gate 10, some of the original lettering survives on the panels on the rear face.

As originally built, three iron piers under the entablature divided the space into two pedestrian entrances and two central vehicular entrances (all with iron gates). In the case of Dock Gate 8 these appear to have been removed by 1945; the outer two piers and the gates survive on Dock Gate 10.

On the front face of the northern pier of Dock Gate 8 is a bronzed metal memorial plaque presented to the Southern Railway by the US Army in commemoration of the military personnel who embarked from the port in World War II. The inscription reads: 1939-1945/ THIS TABLET WAS PRESENTED TO THE SOUTHERN RAILWAY BY THE / 14TH MAJOR PORT, UNITED STATES ARMY, IN PROUD AND GLORIOUS/ MEMORY OF THE MEN AND WOMEN OF THE FORCES OF THE/ UNITED NATIONS WHO SAILED FROM THIS PORT DURING THE GREAT/ WAR AGAINST AGGRESSION TO SECURE THE FREEDOM OF MANKIND/ DEO J. MEYER COLONEL TC SHERMAN L KISER COLONEL TC/ DEPUTY PORT COMMANDER PORT COMMANDER. This is included on the UK National Inventory of War Memorials: reference 21625.

Southampton’s rise as a major passenger port dates to the mid-C19 and the development of the rail system which enhanced the advantages of its proximity to London by reduced journey times. By the start of the C20 its location, close to the metropolis and the continent, and ample space for development on reclaimed land (necessary to cope with the demands of the escalating size of ships), meant that it was rivalling Liverpool as Britain’s main passenger port. Major shipping lines including Cunard and the White Star Line began to relocate from Liverpool and, following ambitious programmes of dock development, by the 1920s it had firmly eclipsed its northern rival as the country’s premier passenger port. In 1930 nearly 30 shipping companies maintained regular passenger services from Southampton. By 1936, during the heyday of the ocean liner in the inter-war years, Southampton handled 46% of all the UK’s ocean going passenger traffic with 560,000 travellers, and was being billed as ‘The Gateway to the World’.

During World War II, Southampton was the point of embarkation for the British Expeditionary Force to France at the start of the war and after D-Day became a principal port for the invasion of Europe with around 60% of all American troops and equipment embarking from Southampton. A transit camp for German prisoners of war was established near Dock Gate 8 in 1944.

Following the decline of maritime travel during the 1960s, due to the advent of cheap long-haul flights, Southampton found a new role as a cruise ship terminal and is today one of the busiest cruise ports in the world. The Western Docks remain in use for this purpose under the ownership of Associated British Ports who took over control of the port in 1982-3.

The Western Docks
At the end of the First World War, during which they had been requisitioned as No. 1 Military Embarkation Port, Southampton docks were returned to their owners, the London and South Western Railway (LSWR) who had acquired them in 1892. In 1923, as a result of Grouping (the merger of many railway companies following the 1921 Railways Act), ownership passed to the expanded Southern Railway Company who in the same year obtained parliamentary sanction for an ambitious programme of dock enlargement. At an estimated cost of £10 million, the project involved the construction of a new self-contained docks estate with 7,500 feet of deep-water quays to the west of the Royal Pier, a 1,200 ft long graving dock (the George V dry dock, then the longest dry dock in the world and listed at Grade II) and transit sheds, railway sidings and other dock and passenger facilities. The New Docks (later renamed the Western Docks) eventually cost £13 million pounds and was the largest civil engineering construction project at a British port in the inter-war years. Construction commenced in January 1927 under the leadership of F E Wentworth-Shields (1870-1959), the Southern Railway’s docks engineer, with 407 acres of land reclaimed behind the new 7,542ft long Extension Quay (now called the River Test Quay). Cunard’s Mauretania was able to berth at the first completed section of the quay in October 1932 and the docks were completed by 1933.

The two surviving dock entrances, Dock Gate 8 (at the south east entrance to the Western Docks on Herbert Walker Avenue, now the entrance to cruise ship berth 101) and Dock Gate 10 (at the north of the site on Southern Road, now the entrance to cruise ship berth 106) were built in the early 1930s during the development of the Western Docks. They do not appear on the 1932 edition of the Ordnance survey map, where the area is labelled as a reclamation work in progress, but were presumably built soon after, probably around 1933-4 but certainly by 1936 when there are photographic records of Dock Gate 8.

Dock Gate 8 and Dock Gate 10, Western Docks, Southampton, built by the Southern Railway Company circa 1933-4, are listed for the following principal reasons:
* Rarity: rare survival of dock gateways dating from the inter-war period, the heyday of passenger liner travel;
* Historical interest: the portals to the Western Docks, developed in the early 1930s to consolidate Southampton’s emergence as Britain’s main passenger port and ‘Gateway to the World’, the gates have particular resonance as reminders of the Golden Age of passenger liner travel, Britain’s links to the wider world and the empire, and Southampton’s pre-eminence. Dock Gate 8 has additional interest derived from the memorial plaque erected after World War II by the US army commemorating Southampton’s role as a port during that conflict;
* Architectural interest: monumental scale and stripped classical design that reflect the confident growth of the port of Southampton’s role in maritime trade and travel while its Moderne detail alludes to the iconic decorative style of the inter-war ocean liners;
* Group Value: with the listed contemporary George V Dry Dock and Pumping Station which were also built as part of the Western Docks development.